I don't know much about Manteno besides the fact that it's an exit on the interstate on the way to Chicago which is fairly quick for a get off/get back on gas stop. I've stopped there several times. But beyond that, I don't think I know any other Manteno fun facts.

Wait, is that where that racetrack was? Horses, not cars. Now I need to look that up.

Nope. Balmoral Park was between Beecher and Crete. Looking at the distance on the map that's... 19 miles from Manteno. Not bad, actually. Within a 20 mile radius I'm gonna call that a fun fact.

That spot always looks so weird on an aerial photo. They wanted to build a massive horse racing facility in Illinois and they put it THERE? Here was the location for the (now closed) Balmoral Park: 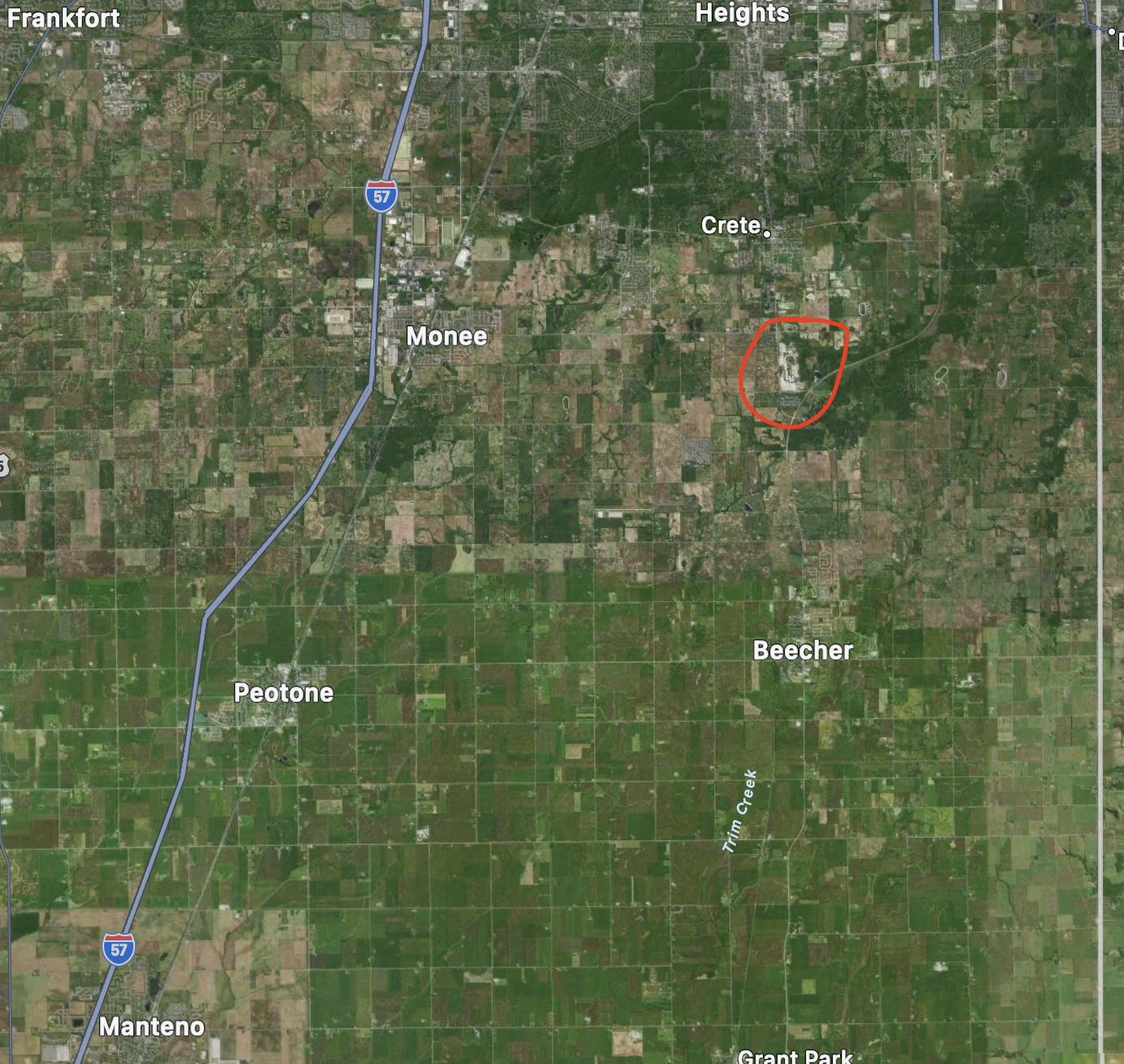 I don't know what any of this has to do with Josh Gesky coming from Manteno. But that's my fun fact for the day. 19 miles from Manteno is a (now closed) horse racing track that was built in 1924 when no one had a car and I don't get it.

2021 statistics: Redshirted, did not play in any games.

Former OL coach Bob McClain recruited six offensive linemen during his time in Champaign and there are two left. (Seven linemen joined while McClain was the OL coach but I consider Josh Kreutz a Lovie Smith recruit since Lovie had the relationship with his dad.) Of the recruits targeted and landed by McClain, Brody Wisecarver, Kevin Tyler, Blaise Sparks, and Phifer Griffin have all left the program. So it's down to Josh Gesky and Zach Barlev.

Both were in the 2021 class so they've only ever played for Bielema. And Barlev already found the field last fall (he still redshirted, but he was part of the Barge Package so he played in the Penn State game (started the Penn State game, actually). Gesky did not appear in any games.

This spring, Gesky probably looked the most different of any of the linemen. I swear he gained 35 lbs from August to March. So perhaps he only needed one year of lifting and eating.

This is another offensive linemen who would be 20-25 spots higher if the staff didn't add three transfers (Dylan Davis, Isaiah Adams, and Zy Crisler) this offseason. The idea behind adding Adams (a junior), Davis (a sophomore), and Crisler (another sophomore): give the freshmen some time to develop.

If those three didn't transfer in, Gesky is probably 43rd or something on this list. Which translates to "this redshirt freshman will be in the two-deep and is going to have to be ready to play." Instead, he gets another development year. Which is great for a redshirt freshman lineman. More lifting and eating.

What was once Balmoral Park is actually an interesting lesson in betting on how a city might eventually grow. And they almost got it right. The Kentucky Jockey Club actually built Lincoln Fields (Which would eventually become Balmoral Park) in 1925-26. If the track was to be successful in the long run, the KJC felt they needed more than 1,000 contiguous acres and found an intriguing chunk of cheap land that was just large enough south of Crete. This patch of land was bordered on the west and east by railroads that went straight south of Chicago toward Danville, and almost perfectly bisected by Illinois Route 1, which was the major road heading south out of Chicago toward Danville AND Champaign-Urbana at that time. It's laughable to think about in this day and age, but in the mid-1920's there was no north-south road that directly connected Kankakee and Chicago. What was the most direct route to get from Chicago to Kankakee in a car at that time? Head south on Route 1 to Momence, then hop west/southwest to Kankakee. Anyway, the KJC was hoping that as Chicago and all its surrounding communities grew, the allure of the race track would eventually require passenger train service on at least one of the two railroad lines while Route 1 would maintain its place as the main road heading south out of Chicago. Unfortunately the Route 1 bet wasn't a winner, in fact just four years after Lincoln Fields opened in August 1926, what was originally Illinois Route 49 (And now Illinois Route 50) was open and running straight north from Kankakee and eventually feeding into Cicero Avenue, finally giving Kankakee (And further south, Champaign-Urbana) a direct north-south highway into Chicago. The passenger train service bet also was a loser, although it took a combination of post-World War II urban sprawl being almost completely focused on the automobile, Chicago's post-War growth heading exponentially in every land-bound direction except for a slower pace directly south, and the facility somehow taking NINE YEARS after the end of the War to re-start racing, for that gambit to fail.