Seems weird to end on 16 here. Maybe I should make up a post so that the Tale Of Two Cities series reaches 17. Would allow me to start the next one with my standard "this is one of the seventeen posts written about this past weekend" jokes.

Oh well. Coming up just short was the theme of Saturday and Sunday, so maybe that fits. Back to the mailbag questions:

When Luke Goode returns how would you expect minutes to be distributed among the team?

I guess we should start by looking at the minutes so far this season. It's rather difficult to do this when those first three games are 60% of the data and the starters mostly sat for the final 12 minutes of those games. But it can be our starting point.

(Serven, Lieb, and Warden got 37 minutes between the three of them those first three home games but all three got 0 minutes in Vegas so I didn't include them.)

The first thing that jumps off the page to me is that the rotation, even early, is deeper than last year (even without Goode). Maybe "deeper" isn't the right word. Perhaps the best way to say this is to point to players averaging 30 minutes per game or more in each of Underwood's seasons:

Again, it's way early. Had we played three decent opponents in the first three games, Coleman might be averaging 30 minutes per game as well. But this rotation, so far, looks more like 2018 (nine players between 17 and 26 minutes per game) than any of the other Underwood seasons. Perhaps the best way to say that:

This seems to be a shift back in that direction. Starters, so far (again, including those first three so the numbers are skewed) have played 119.4 of the 200 minutes. If we just take the two Vegas games -- which might be the two games with the tightest rotations all year because freshman trust needs to be earned -- the starters played 143 and 138 minutes. Still short of the average last year when 150 minutes went to the starters.

So there's the framework. Now to the question: Luke Goode's minutes once he returns. Using the current minutes listed above, I think I think the following:

OK, add it all up and let's see what Goode gets. The nine numbers I listed above add up to 185, so that gives Goode 15 minutes per game. Hmmmm... I feel like he'll play a little more than that. Probably closer to Dainja's 18 mpg? I need to shave three minutes-per-game somewhere. I'll take one from each freshman guard since Big Ten play always sends freshmen guards into a bit of a tailspin. So here's my final answer:

So Goode takes all the minutes played by Lieb, Serven, and Warden so far + steals a few from each of the freshmen. Melendez (and Mayer) will start to steal those minutes from the freshmen as we play teams like Syracuse and Texas in the next few weeks, but then Goode will return and take them all for himself.

Defensive schemes to take away Williams and stack against Chase lead to more open TE seam routes that we are not exploiting. Where is Luke Ford?

I think you nailed it, 1701. It's the one thing I wish this offense could do. We nibble at the edges in the passing game, and Chase is a constant threat, so the defenses start hedging, and I'd love to just WHAM hit 'em with the tight end seam. We tried it at least twice to Reiman (I want to say Virginia game and... Minnesota game?) and at least once to Marchese but couldn't connect. I love Tip and Mark Case but I don't think they're the type of athletic tight ends who can get separation and then make that really tricky catch.

So yes, Ford would be the guy to do it. I've seen him do it in practice. He was the #51 player in the 2018 class (and the number one player in Illinois) because he tested out as that kind of athlete. After he made that leaping touchdown catch in the 2021 Nebraska game (and the one-handed TD in the spring game) I was picturing a lot of those "wow, what an athlete" plays.

But for whatever reason, he's mostly been used as a blocker. Only 9 catches this year after 15 catches last year. I was hoping he'd get all the Barker targets, but it just hasn't happened. Receiving yards for tight ends: 156 yards for Tip Reiman, 132 for Michael Marchese, and 71 for Luke Ford.

So my answer to "why haven't we hit the seam routes?" is "we tried 3-4 times but couldn't connect to Reiman and Marchese and we haven't tried again." My answer to "where is Luke Ford?" is "for whatever reason, this staff uses him mostly as a blocking tight end."

(And I should note - he's had some great blocks this season. Just hasn't had the great catch on the seam route you're asking for.)

What has been your take on Skyy Clark thus far this season?

As always, let's back up before we move forward.

You might recall that I was a bit bearish on Skyy Clark when he committed. I wasn't a hater (at least I don't think I was a hater) - it was mostly that as a rankings historian, I was annoyed that he was anointed "the highest ranked Illini recruit in the internet era". He had already fallen on several lists (because of the ACL injury), but the composite wasn't updated yet, and everyone was jumping the gun because "top recruit in 20 years!" is so sexy to say.

So in the LLUOI article I wrote for him, I took issue with this News Gazette cover page: 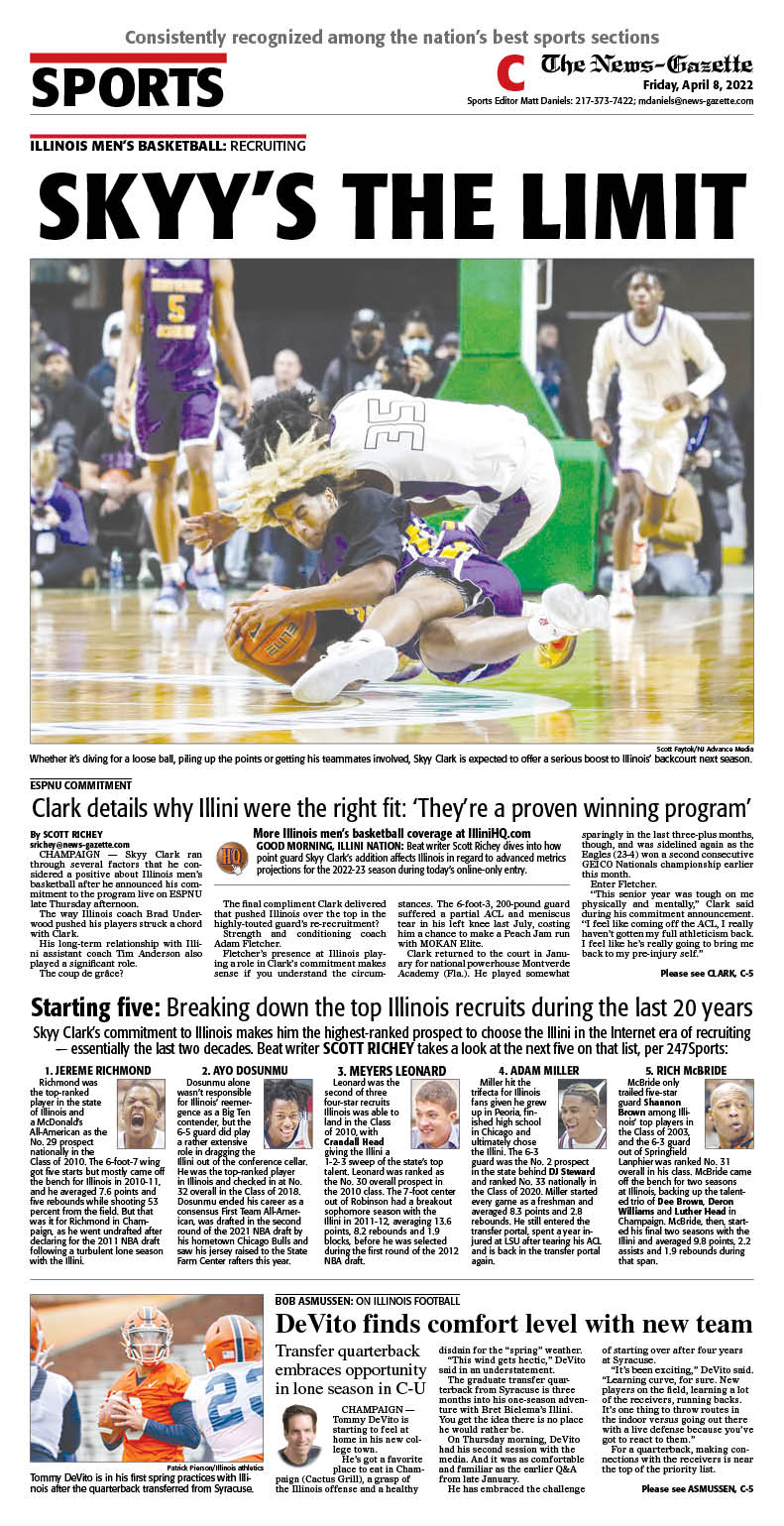 The numbers updated a few weeks later. Clark ended up 5th on the list above (below Miller but above McBride). And even that is a faulty list because 247 had to go back and re-create top-100 lists for the years 2002 through 2011 and they don't reflect the meticulous lists I've kept on Illini basketball recruits the last 25 years but now I'm way off track so let's get back to Skyy.

I gave Skyy 4.25 Cruises (out of 5). I think a lot of people were expecting 5 Cruises (like I gave Ayo). I explained that I saw him a rung below an Ayo-like recruit. Still a fantastic get, just... not Ayo.

Non-Illini Player Comp: Demetrius Jackson at Notre Dame. Let me go see where D-Jax was ranked. 34th! Perfect. This is the comp.

Both are stockier lead guards (as opposed to wiry guards like Sencire Harris). They're not just point guards - they can score. Jackson was decent as a freshman at Notre Dame, great as a sophomore, and then a Naismith Semifinalist/Cousy Finalist his junior year before declaring for the draft. Remember how he single-handedly destroyed us in that Big Ten/ACC Challenge game in December of 2015? Man, he was so good. And he picked between Illinois or Notre Dame, too. Jackson bounced around the NBA for three years before going to Europe (probably just too short for the NBA), but great, great college player.

Skyy Clark is a bit taller, so that will help his pro prospects. And if he returns to 100% after the knee injury is fully rehabbed, he might be a 2-year college player instead of a 3-year college player. But that's the kind of player I see us getting here. Our own D-Jax.

My fears? The lost explosiveness from the ACL injury means he's a "maybe needs a year before he's ready" and we need him now.

I think he's still maybe lacking some of the explosiveness (and we should see that continue to return over the next year). But he's a bit stronger than I anticipated. That will help him with defense, rebounding - everything.

I'd say that he's right in line with my 4.25 Cruise evaluation (I had Ty Rodgers rated higher at 4.75 Cruises). And I still have Skyy on the DJax trajectory. Hopefully it's the same "decent as a freshman, great as a sophomore, Naismith semifinalist/Cousy finalist as a junior before declaring for the draft" path.

did the weekend leave more encouraged or discouraged about football next season?

One hundred thousand percent more encouraged. I'm not even sure how "discouraged" would even enter the picture for me.

We played the #3 team in the country. We put up a 63% Postgame Win Expectancy per Bill Connelly's numbers. Play that game 100 times with the exact same statistics and, based on how college football games have been won in the past, Illinois wins 63 times while Michigan wins 37 times. The game wasn't close because we were getting lucky. The game was close because we were out-playing them. Out-playing the undefeated #3 team in the country.

A playoff team, having won 22 of their last 24 games, having just beaten Penn State in the same stadium 41-17, needed a field goal with nine seconds left to beat us. How is that anything but ridiculously encouraging? Not only are we "competitive", we just proved we could hang with any team in the country.

I'll just say it this way and then you can say "case closed." Illini football games against top-3 opponents the last 40 years:

We typically lose these games by 20+. We're usually at least a 25 point underdog. And we got beat on a FG with nine seconds left.

Pivot that field goal seven degrees to the left and we'd all be sitting around talking about one of the top-5 wins of our lifetimes. There's just no way I can be discouraged by the fact that it was on target. Especially with the, ahem, assistance they received in getting into field goal range.

Drop-to-my-knees devastated in the moment? Absolutely.

Happy Thanksgiving to all my fellow fans