I'm still completely buzzing from this basketball game. I don't even know how to get my brain in SOC mode. Maybe I'll just pick up the story from where I left off (where I was on the train from Champaign to Chicago praising rail travel) and then we'll see where we end up. I don't really need to write about the basketball game (Tyler is doing that, right now, in Vegas) so I'll just write about my night.

The train from Chicago to Ann Arbor leaves Chicago more than an hour late. And the route takes us around Lake Michigan and then from New Buffalo to Kalamazoo. That stretch is right at the center of all the lake effect snows today. Kalamazoo apparently got 16 inches. Trains still operate in the snow, but as I've written before, everything is bogged down.

Like, when we stop at Battle Creek or whatever, the Conductor has to clear (and salt) the stairs because they've become completely snow packed as we rolled along in the snow. If you think those kids in The Polar Express just got to the North Pole and trotted down perfectly clean stairs, well, HOLLYWOOD LIED.

So by the time I finally get to Ann Arbor it's 9:07 pm EST (was supposed to arrive at 7:30). That means I have 23 minutes to get to my hotel, change real quick, and then head to the Buffalo Wild Wings where I've set up an Illini basketball game watch. I mean, it was kind of crucial that I be the first one there. I've invited people to come, and they don't know each other (they just know me), so I kinda have to be there to do the whole "hey, come join us over here" thing.

Anyway, thankfully, the game didn't start at 9:30. And also thankfully, my Uber Driver believed in extremely orange stoplights. You know orange stoplights, right? The one's where you're claiming you're going through on a yellow but it's really mostly red so you say that the light was "still orange" when you went through. My Uber driver, a very nice man who was talking to a relative on the phone and speaking French while listening to Michael Bolton (all 100% true) got me from the Ann Arbor train station to Ypsilanti in exactly 22 minutes. I changed in my hotel and headed out for BWW.

Once there we had to do some group consolidation (these guys had posted up over here, a couple guys were at the bar, two tables of three were set up over here, and eventually we were able to procure four 4-tops and a 6-top for our group. Food was ordered and eaten, drinks were imbibed, and we all sat around at halftime what just happened with that 10-0 UCLA run. By the time we were down 15, it got really quiet.

But then Sencire Harris provided the spark, and Terrence Shannon Jr. lit the flame, and we got loud. So loud, in fact, that a big table of Michigan fans started cheering loudly for UCLA. Nothing makes me more angry. I'm good with another fan pulling for us to lose. I do it when I watch every other Big Ten team. But if Michigan fans were in Champaign at a bar watching Michigan-UCLA, there's no way I'd try to combat their cheers with cheers for UCLA. Unwritten rule #23: You cheer in this siutation with fist pumps under the table, not "let's cheer for the opponent louder than they're cheering for their team."

They... very quickly got quiet. By the time Terrence Shannon's eighth three dropped, I turned around and they were headed out the door. Near perfection in a road game bar scenario.

That second half was so much fun. 15 down to a double digit lead. The bar getting louder and louder. And then high fives and hugs all around. Thanks for coming out, everyone. It was great.

We took a picture and several people pointed it out: exactly seventeen. 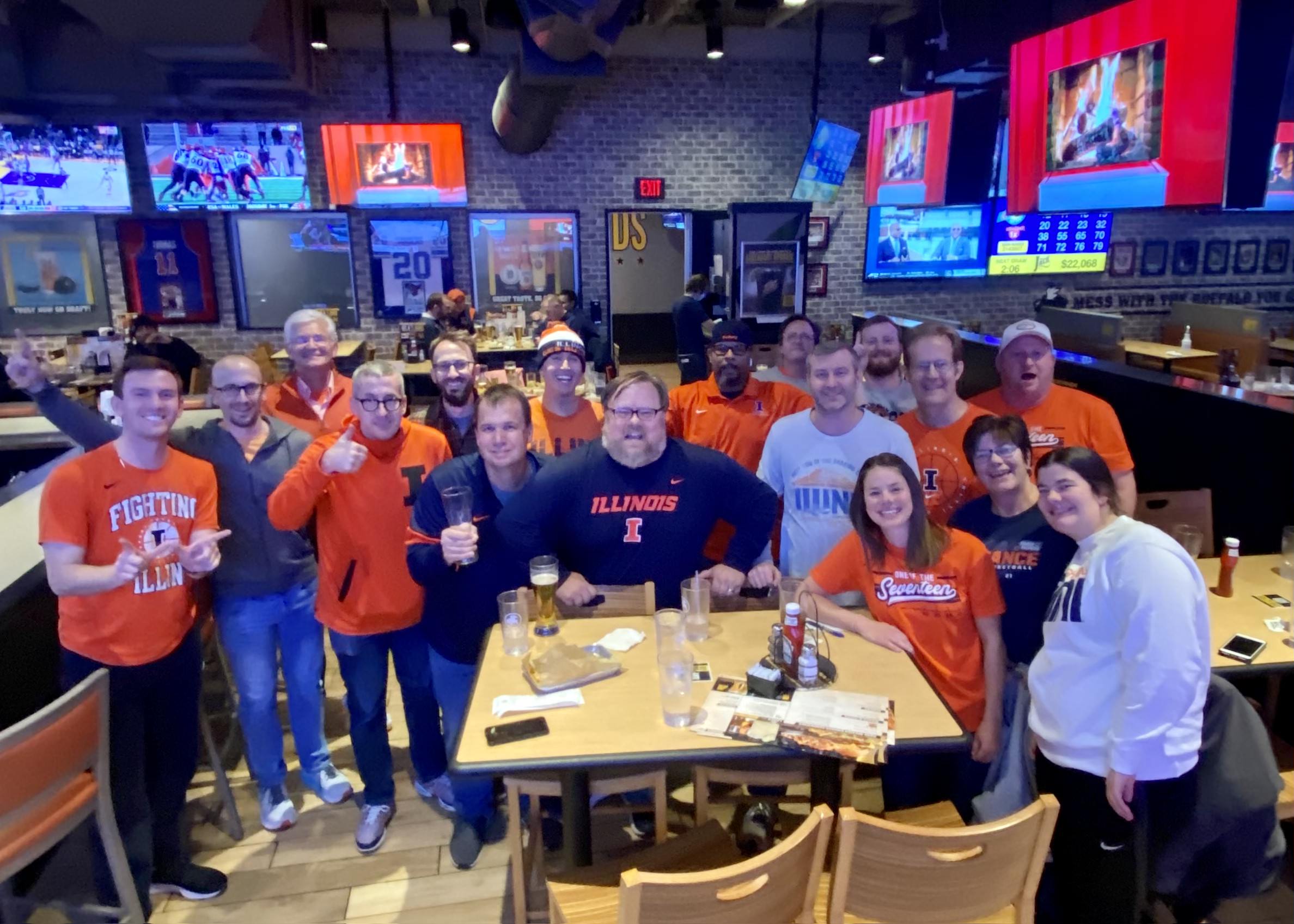 And now, football. I mean, that's why the seventeen of us were there. We chose football in Ann Arbor over basketball in Vegas. Can we keep the good vibes going?

To me, it all depends on Chase Brown. If Chase is out, it just takes away so much of our offense. He's still the leading rusher in the country. In situations like this I always try to frame it as some other school.

Take... AJ Dillon. AJ Dillon had a great junior year at Boston College in 2019 and then declared for the draft (he's now on the Packers). If Boston College was playing the #3 team in the country and I told you "AJ Dillon might not play", I'm immediately completely out on Boston College. If I was a betting man, I'd avoid betting anything and everything involving Boston College. Your one special player is out? No chance.

So if Chase is out, that's how I feel. This defense is probably the best D we will face all year (perhaps Iowa is a little better), so if we scored 9 on the Iowa defense, maybe the best case scenario against Michigan is 13 or 14? And that's with Chase Brown healthy. If he's not healthy, I just can't see a path to beating Michigan.

I do think they're a bit vulnerable. This is the classic look-ahead game where their entire world revolves around Ohio State next week. So maybe they're do for a big ol' letdown game. We do match up very well against them. Grab a couple turnovers and make this one super interesting?

Again, my thoughts go back to Chase. Josh McCray was in a walking boot last week, so if both Chase and Josh are out, are we expecting Reggie Love to lead us to victory at #3 Michigan? I'm a Love supporter and fan, and he's going to break one of those "everyone stops because they think he's down but somehow his knee never touched and he's off" plays soon, but I don't think we can beat Michigan with our third tailback.

There are also injury issues at cornerback. Taz is out, his backup is out (Terrell Jennings), and his backup's backup might be out (Tyler Strain), so we're in a position where we're moving guys from the Star position (Quan Martin and Xavier Scott) and using them as corners. If we have to play Quan at corner a top (staying away from the three safety look the entire game), we're in a position where Ryan Walters has very few levers to pull when things go bad.

If we were playing at, say, Maryland tomorrow, I'd be saying the typical stuff (defense + run game + efficiency from DeVito = great success). But we're playing at #3 Michigan, possibly without Chase Brown.

Guess someone needs to respond.......

I have Michigan 42 and The Illini 20. I'm also on a 2-hour tivo delay from home today. It's already looking like I may have underestimated these two defenses. Hang tough guys!