Honestly, it was all I cared about. From the moment I walked into the renovated Ubben I was jumpy. I wanted the tour to start, and I wanted the tour to start in either the men's or the women's gym so I could see if the spiral staircases were there. I had asked if they were there, and I had been told by someone who had been inside during construction that there were no spiral staircases going in, but I needed to see for myself.

I'll back up. When the bid sets for the renovated Ubben came out, I looked through them. Bid sets have to be made public, and there are tons of online plan rooms, and as someone who used to publish bid sets to public plan rooms, I knew where to go find them. So I found a set of bid documents and, in August of 2021, wrote a three-part series on what would be inside the renovated basketball facility.

The third article in that three-part series focused on one thing: the path Brad Underwood would have to walk to get to practice court. You might remember this image from that article: 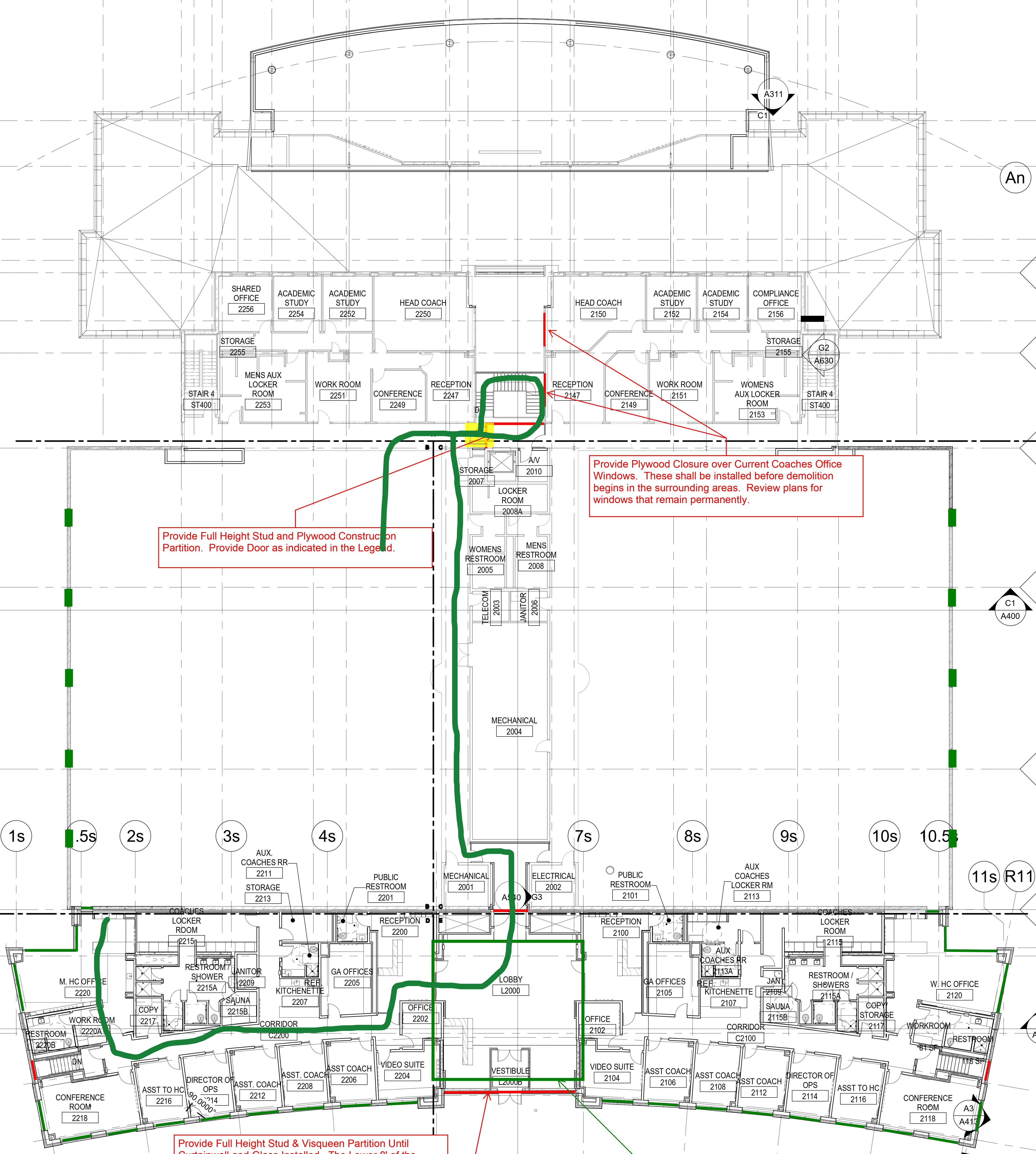 (You might also remember that I suggested one of those personal elevators that rich people have in their homes. Just drop an elevator right next to Underwood's office (maybe even behind a bookcase next to his desk?) and he batcaves his way down one story and onto the court. I regret to inform you that nobody listened to me and no elevator was installed.)

The solution that the architects came up with for the long path from his office to the court: spiral staircases. If you read that article I linked above, you might remember that I included this image: 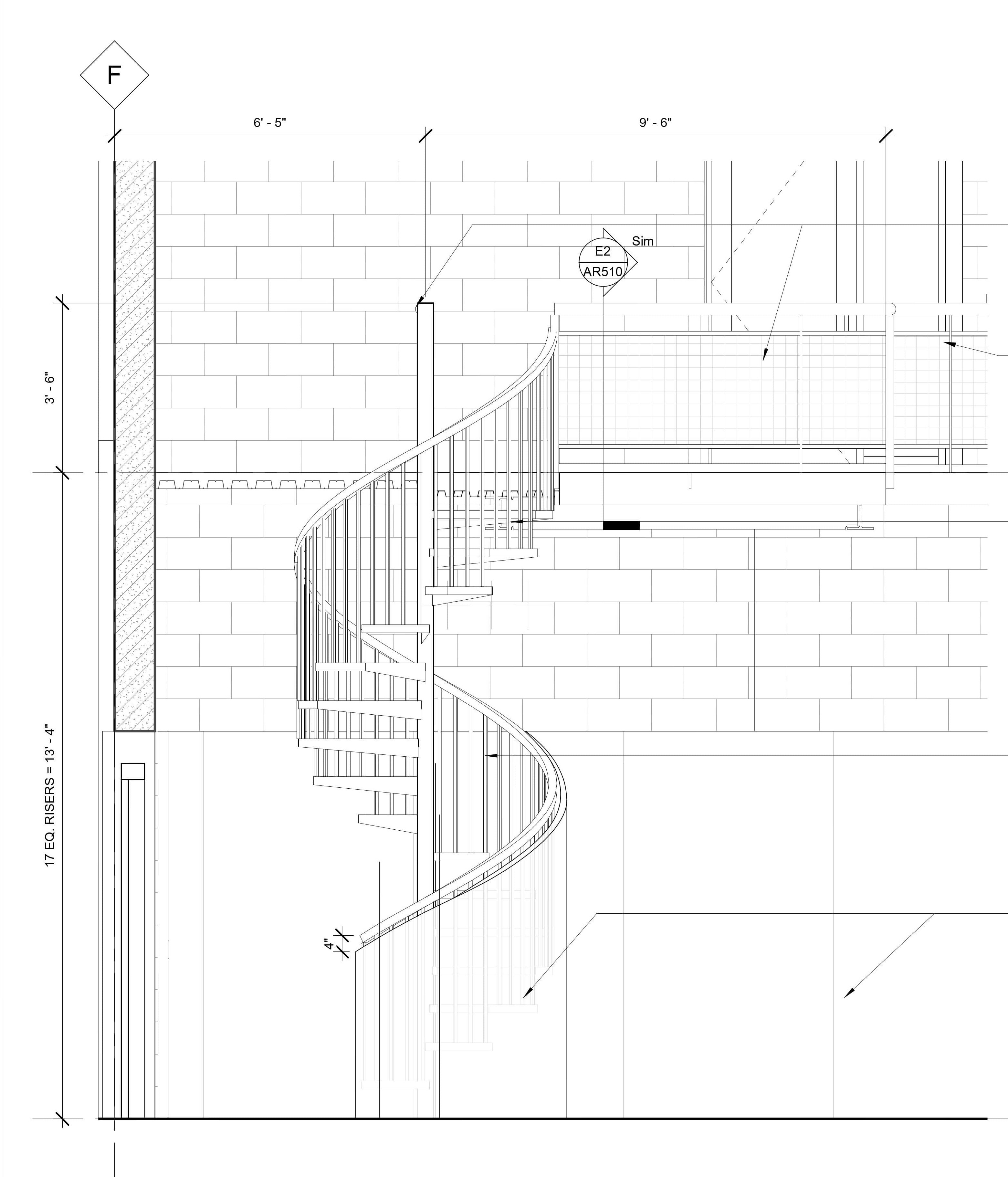 Right at the end of each balcony (in each gym) they were going to add a spiral staircase down to the court. I looked through the first floor plans and found where the spiral staircases would land. And, uh, they were right next to the main practice court: 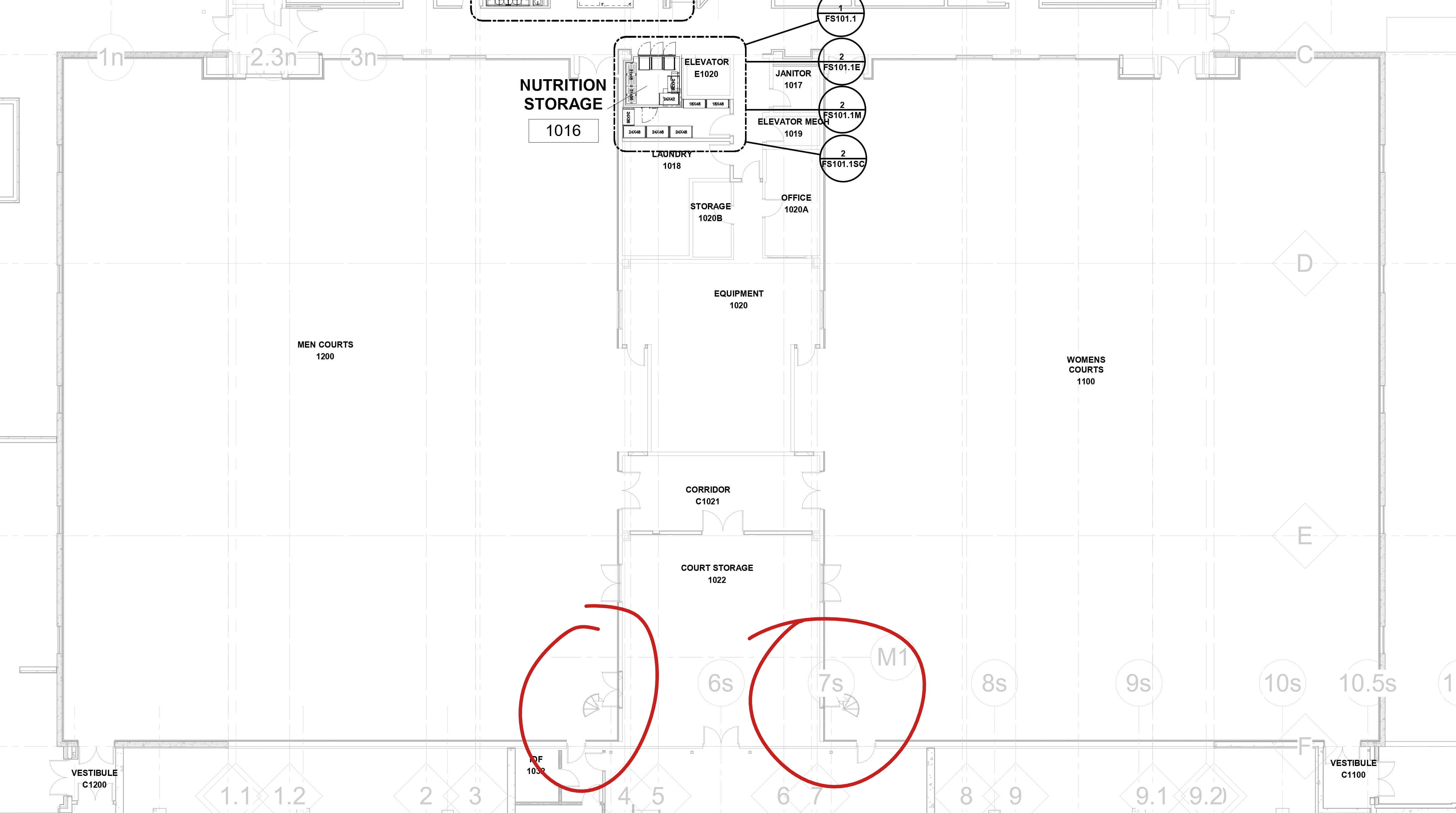 I don't know if you've ever seen (or climbed) a spiral staircase before, but, uh, they're kinda jagged. I'm writing these words in a VRBO in Idaho right now (visiting my now-3.5-months-old granddaughter during the football bye week) and there's a spiral staircase 10 feet from me. A photo: 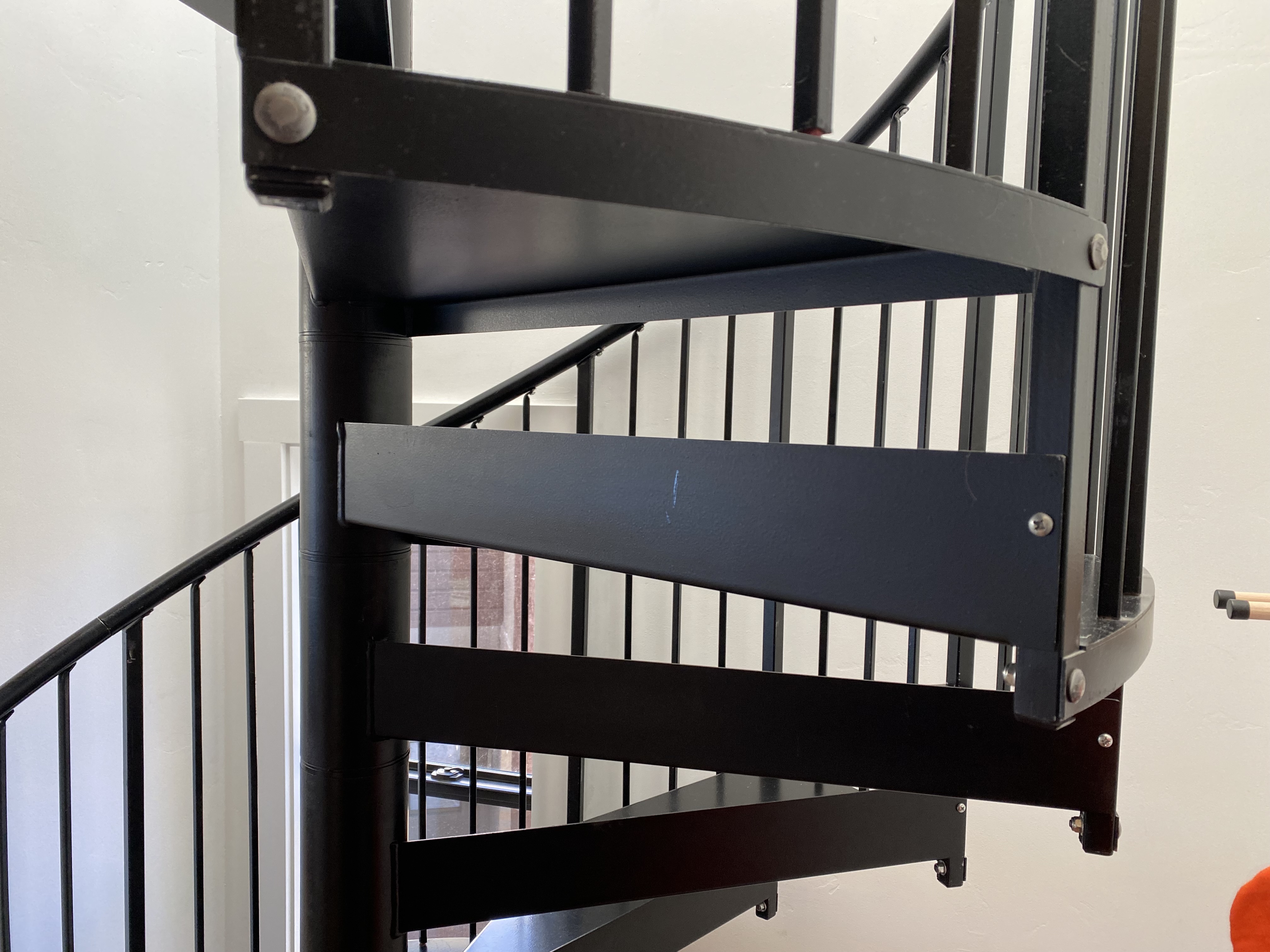 Which is why I was so worried about it. There's just no way to put enough padding on that and not make it an out-for-the-season-y architectural feature. Here's what I wrote in the article linked above:

I know that I just said "man, that's a long way for Underwood to walk", followed by "the designers solved it", followed by "THAT'S the designer's solution?", but I can't not say something. I'm just thinking about Jayden Epps throwing a pass out to RJ Melendez on the wing during practice while on a fast break, and the pass is a little off causing Melendez to have to try to save it inbounds, and his momentum carries him into that corner, man, I'm gonna need the world's greatest padding on that spiral staircase. Because if there's no shell on that stairway and it's just a void underneath the stairs....

Now you're caught up. Back to me pacing around the lobby. At the very first opportunity, I go to the balcony to look for the spiral staircase and...

AND, I found out how they solved the "head coaches getting to the court" issue. I talked to Brett Stillwell, Associate AD in charge of capital projects, and he said that they'll be putting a stairway down through the old weight room. I'll grab one of the images above and show you where.

This means that instead of walking all the way to the other end to get to the stairs, the coaches come out of their offices, enter the women's gym balcony, immediately turn and go down a stairway into the Court Storage room, and then out onto their respective courts. I'm guessing the stairs will punch through right about where that drawing says "7S" and land right around where it says "6S". MUCH better than a spiral staircase. One thousand times better.

The tour of the new facility was about more than just "how do the coaches get to the court?", of course. So let's go through some other highlights.

The fueling station is awesome. On one side they can set out all of the post-practice fuel for the players (prepared elsewhere in the nutrition room/kitchen)... 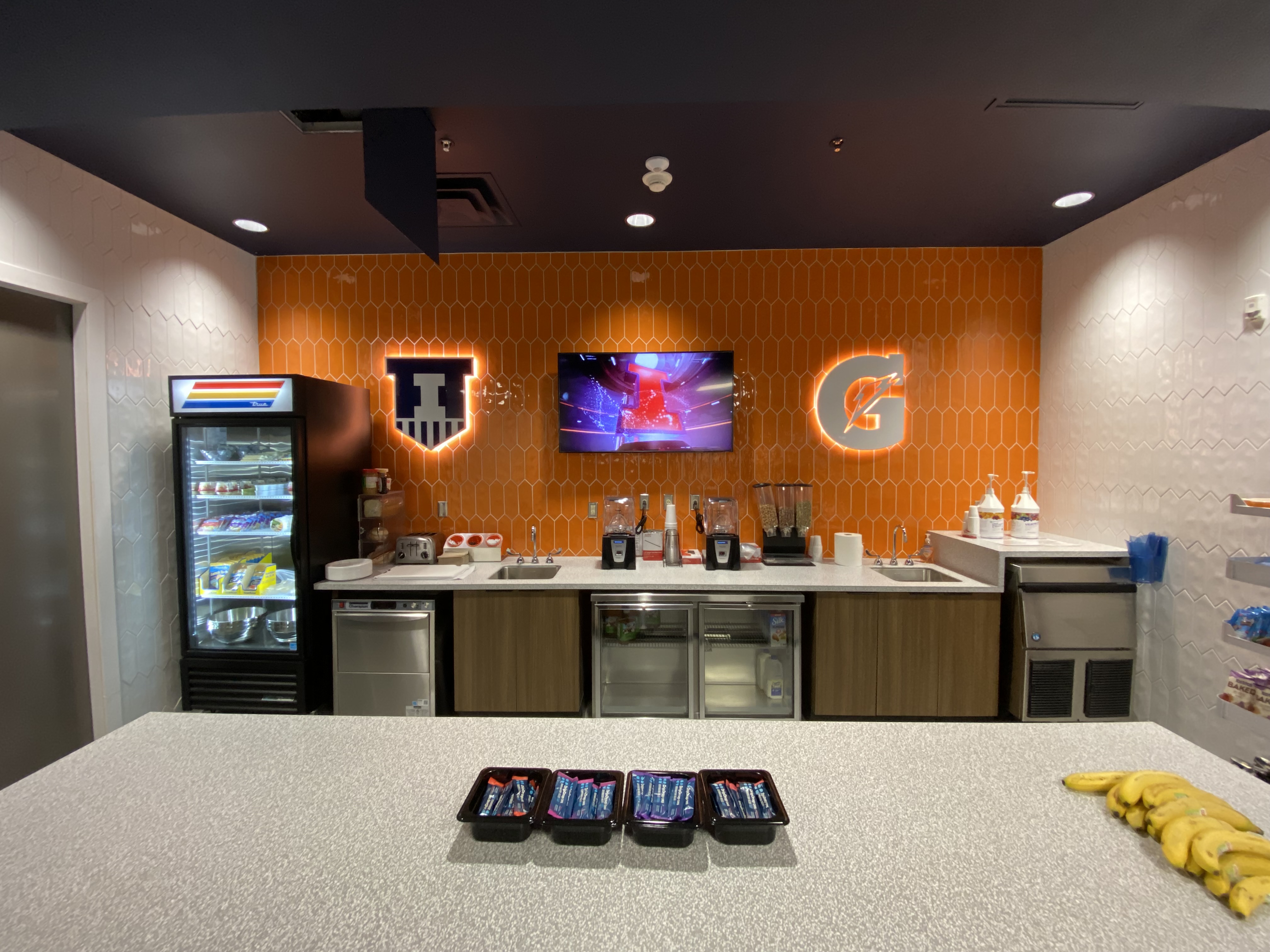 ...and on the other side it's like going to the Circle K except everything is free: 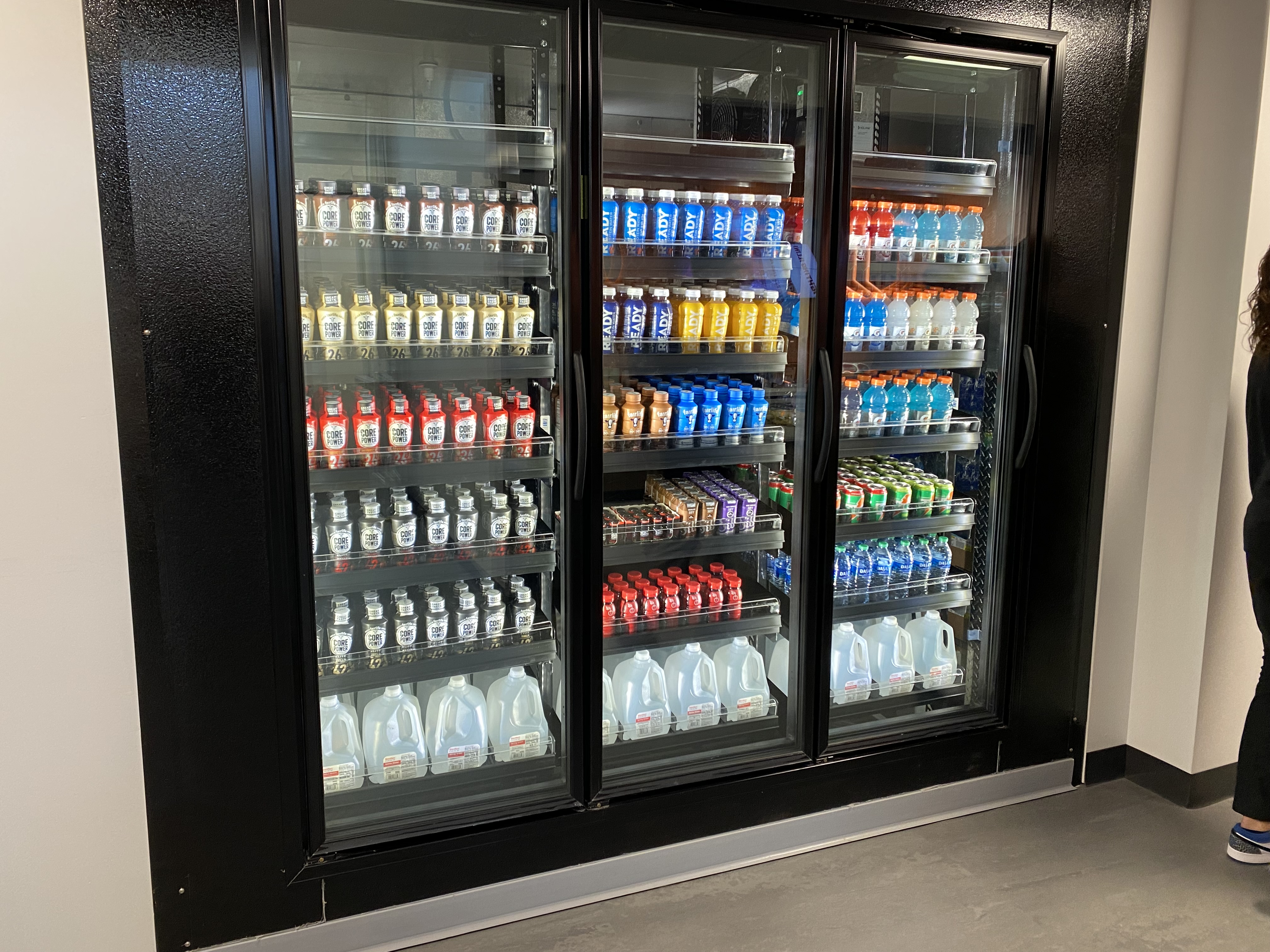 There's super cool hallways like this one from the practice court to the locker room: 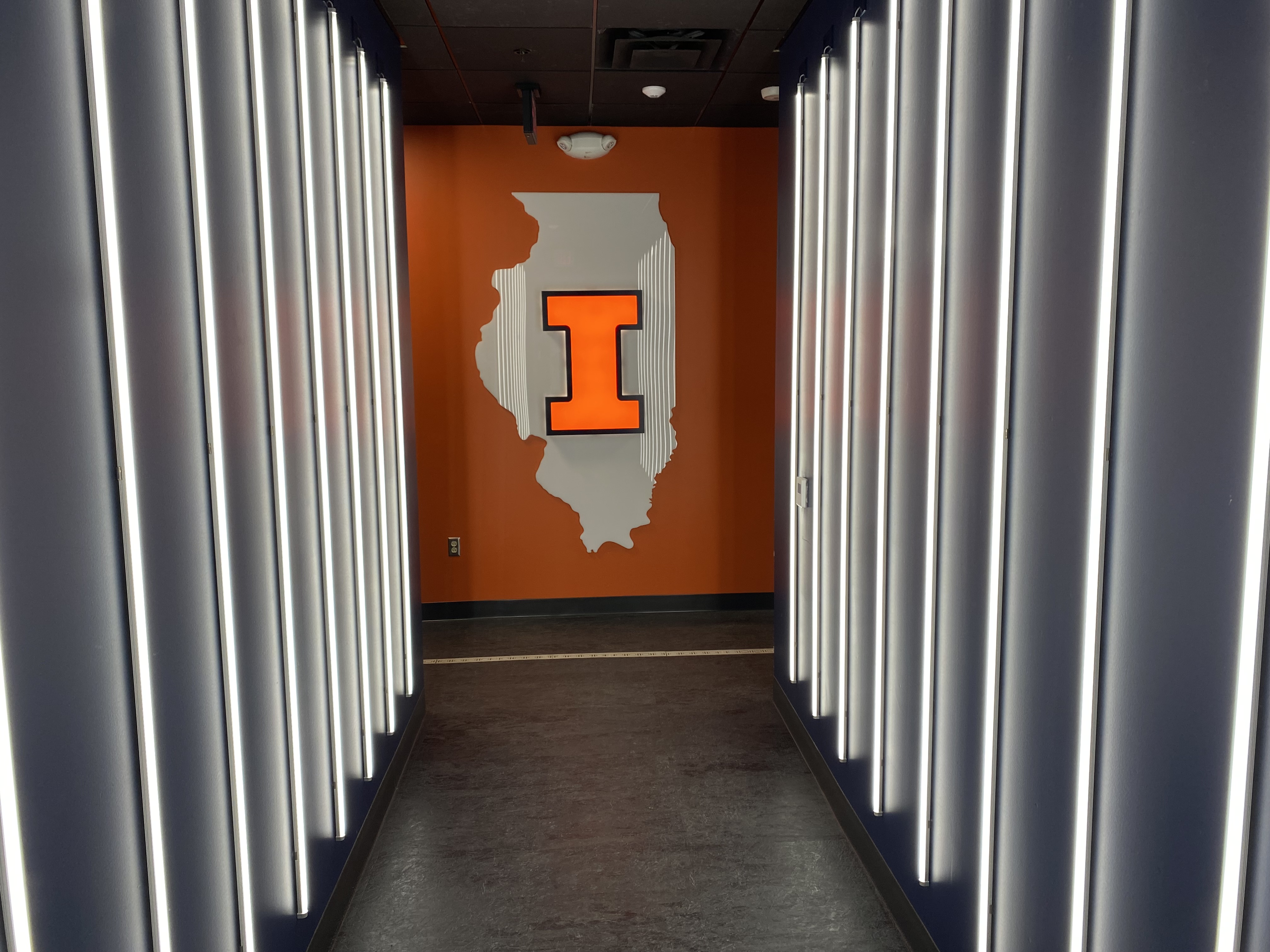 And watching film right here would be super amazingly awesome. 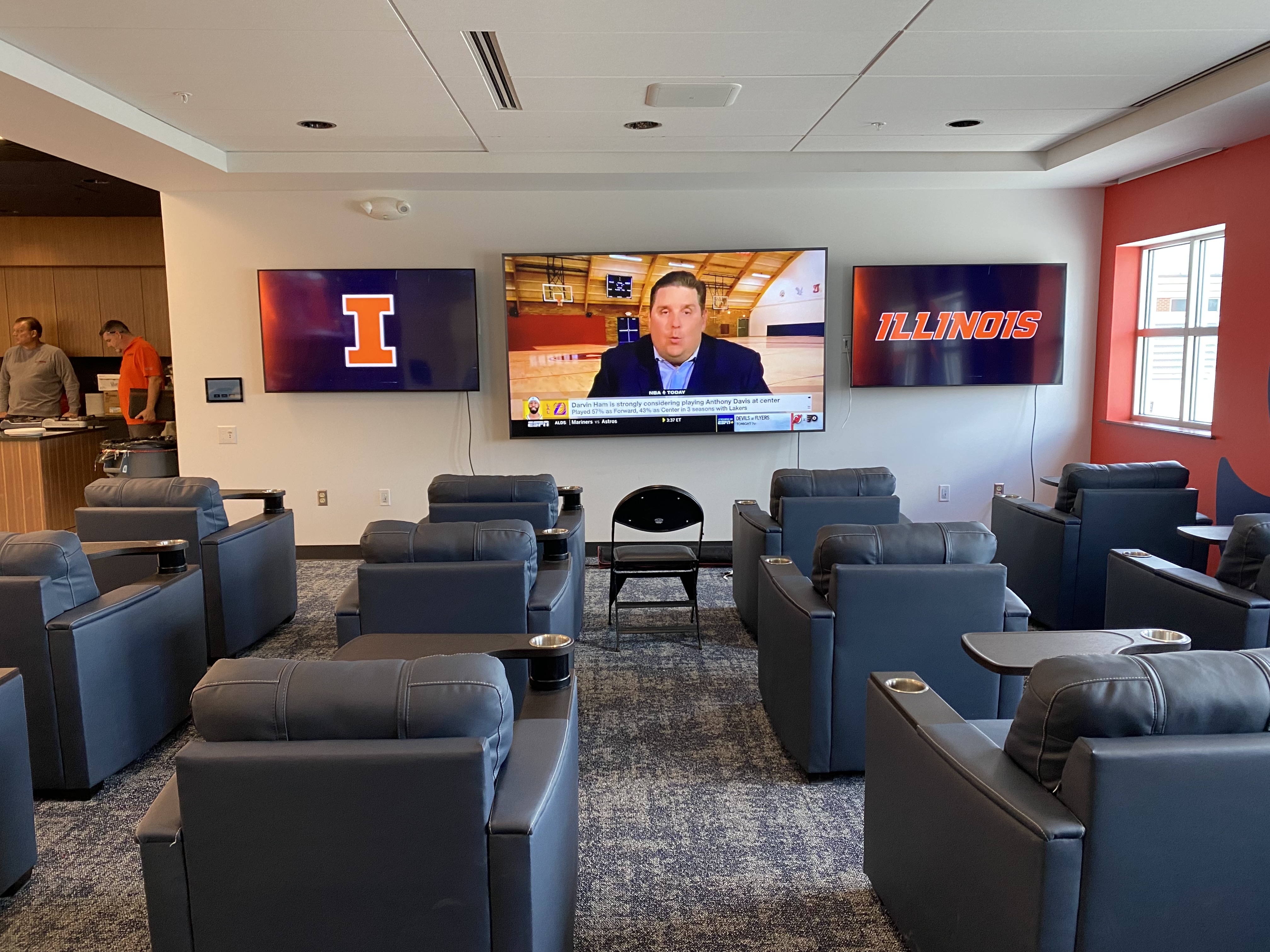 (I waited for a bit to take that picture because I was hoping Brian Windhorst would point with both hands. He didn't do it.)

The best part of the whole thing, to me, is Underwood's office. Has to be a top-5 office in college basketball. I couldn't really get a shot of his desk and all the shelving and such because, uh, he's a popular guy: 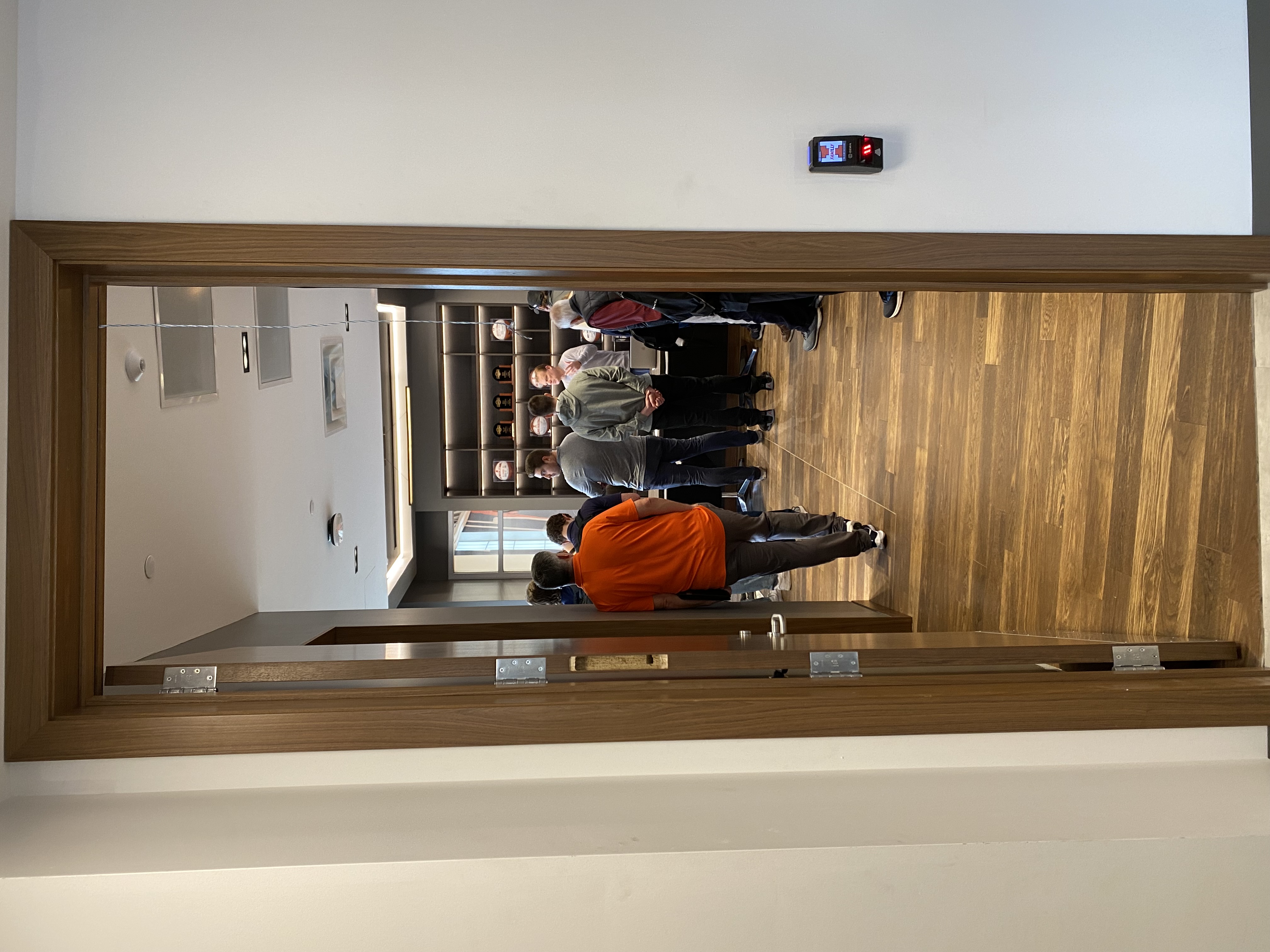 But the best parts weren't the desk anyway (although it was awesome). Just to the left there is his personal locker room (with the temperature set to exactly 69.7 degrees): 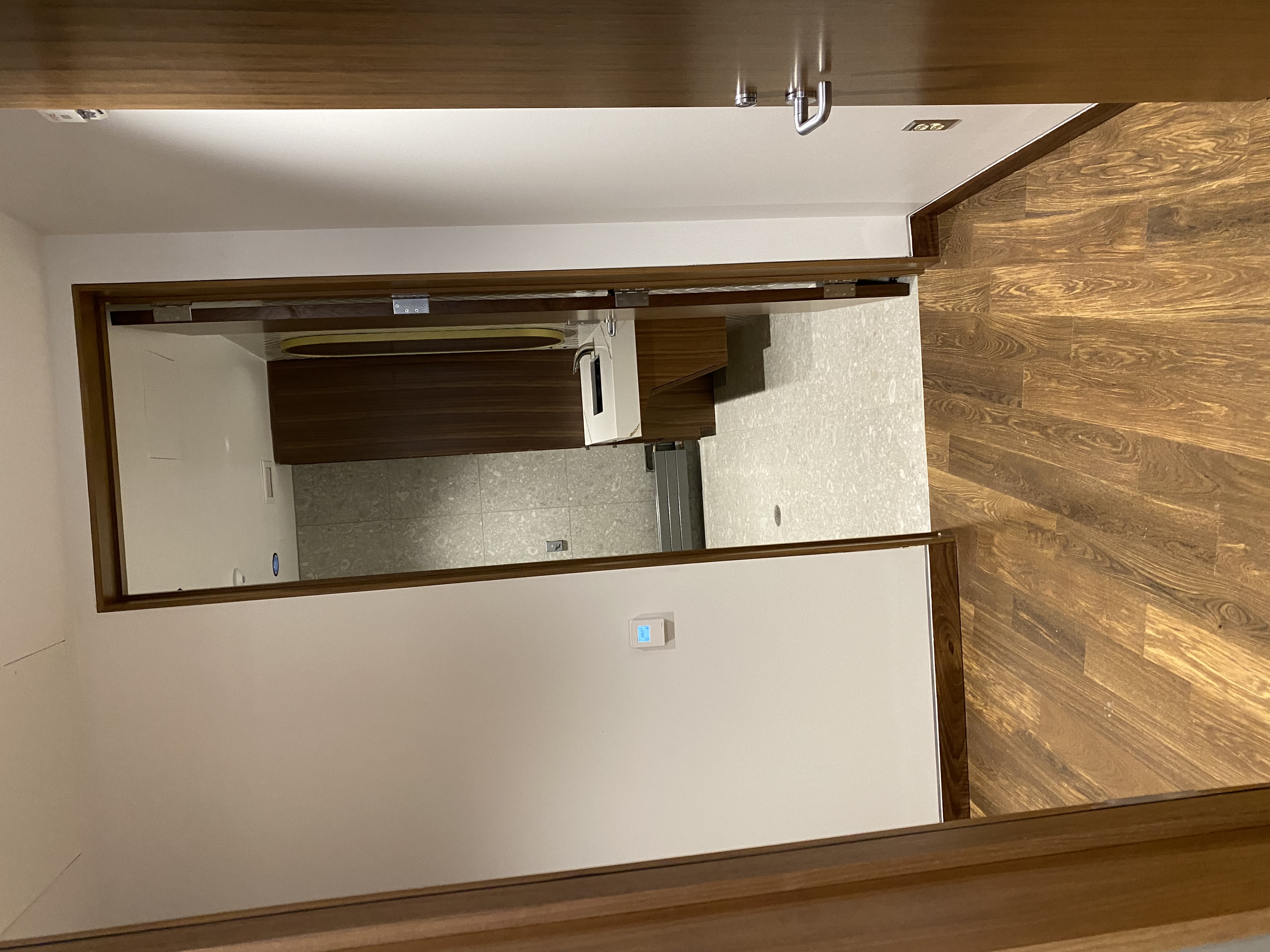 There's this massive closet and even his own bench/locker to get ready before practice: 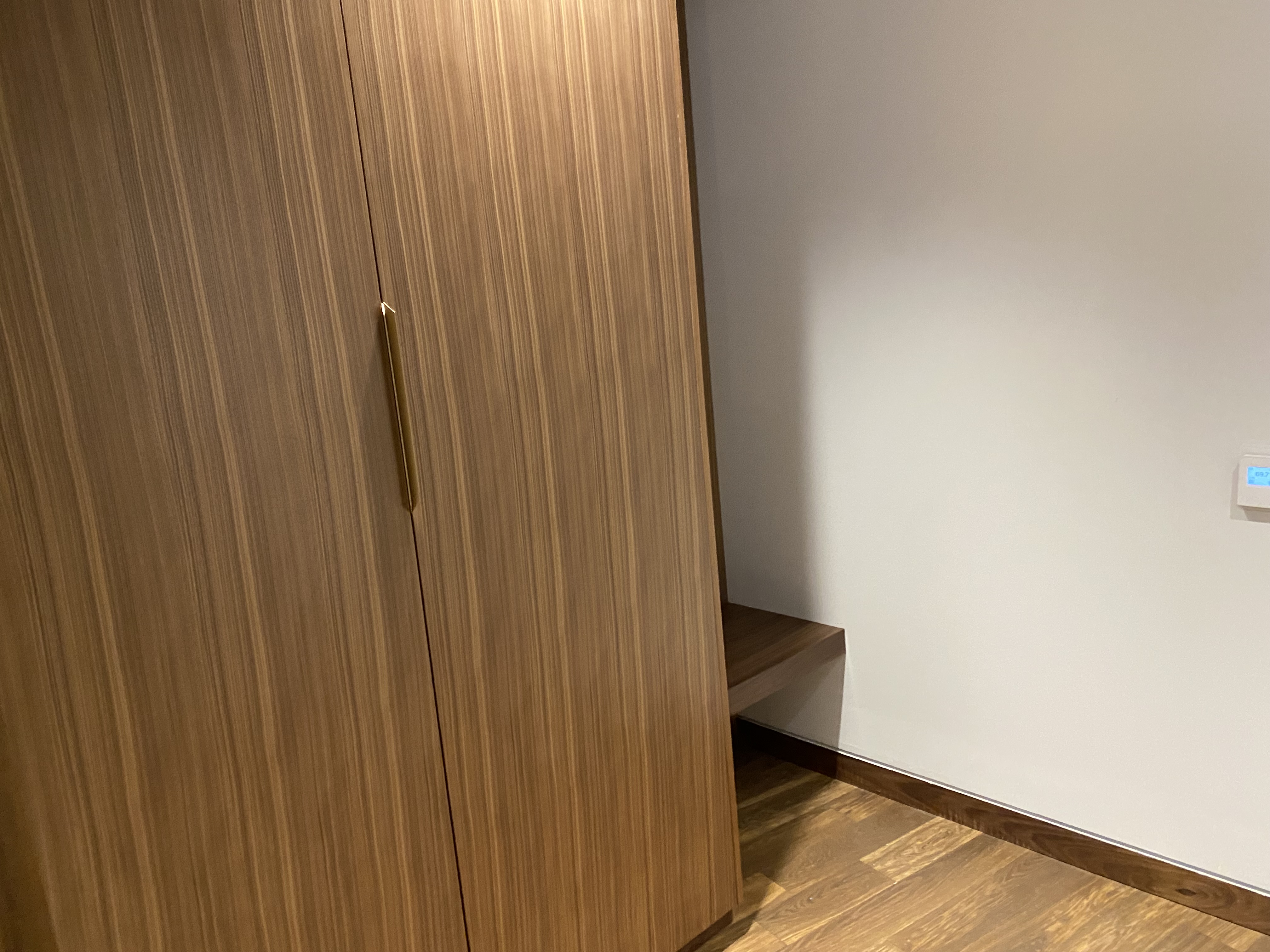 And then the second room is his personal bathroom (with shower) that is the size of my master bedroom: 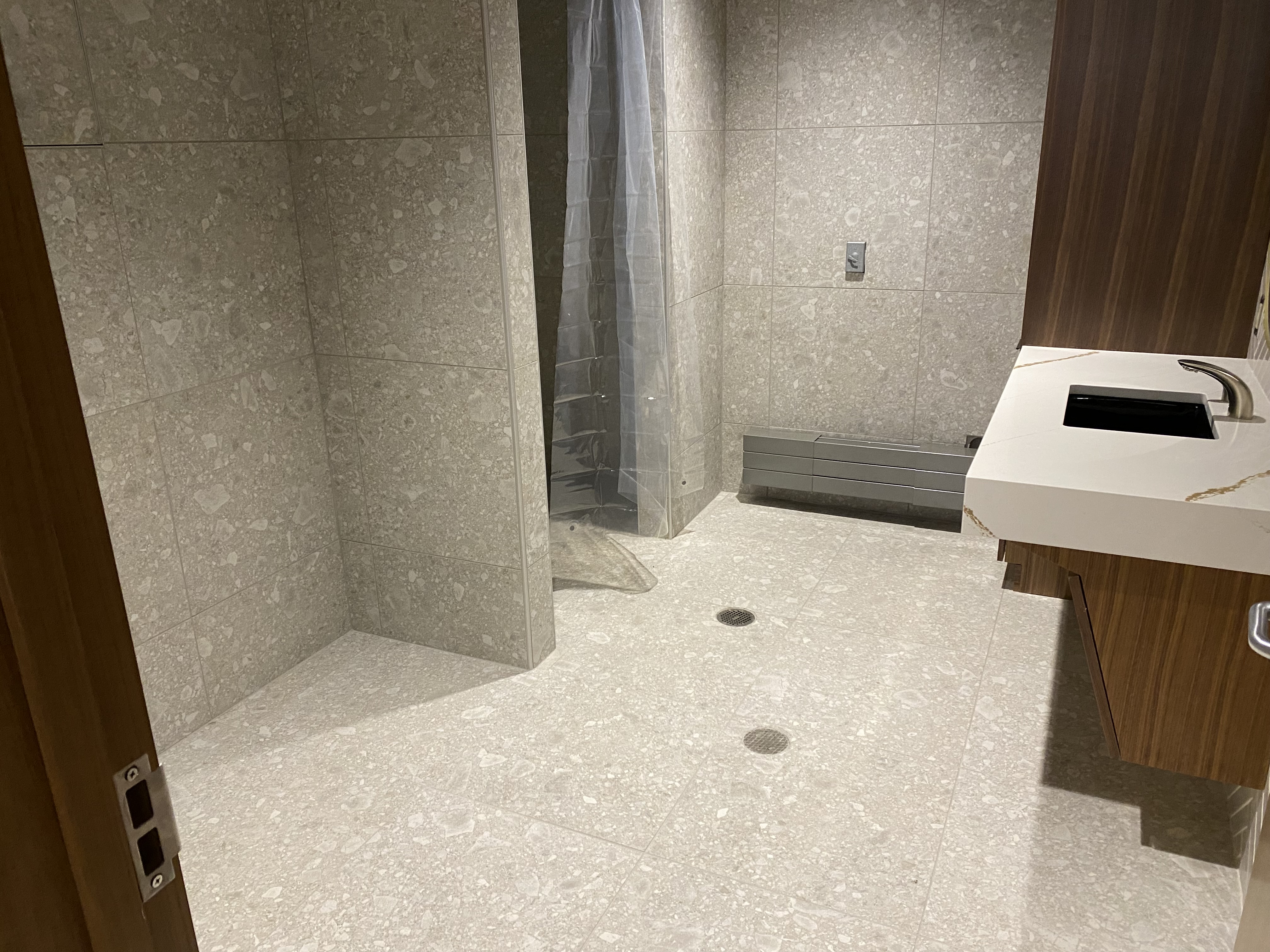 The best part of the office, though, is what I'm calling the Close The Deal With Recruits space. Massive seating area with a 98-inch television (pay no attention to the paint - there's still more tile to be installed here): 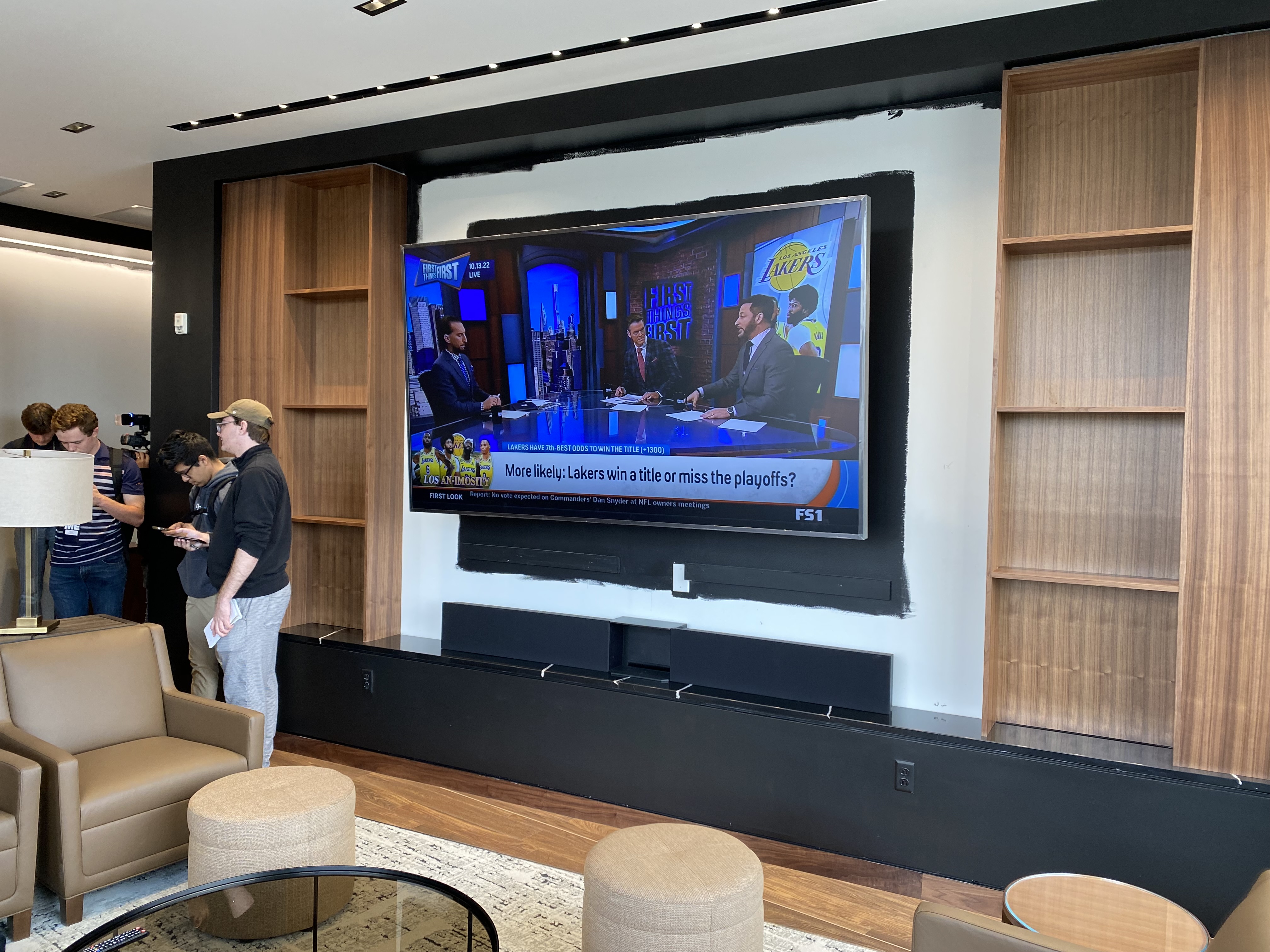 And then the view looks out over the State Farm Center. 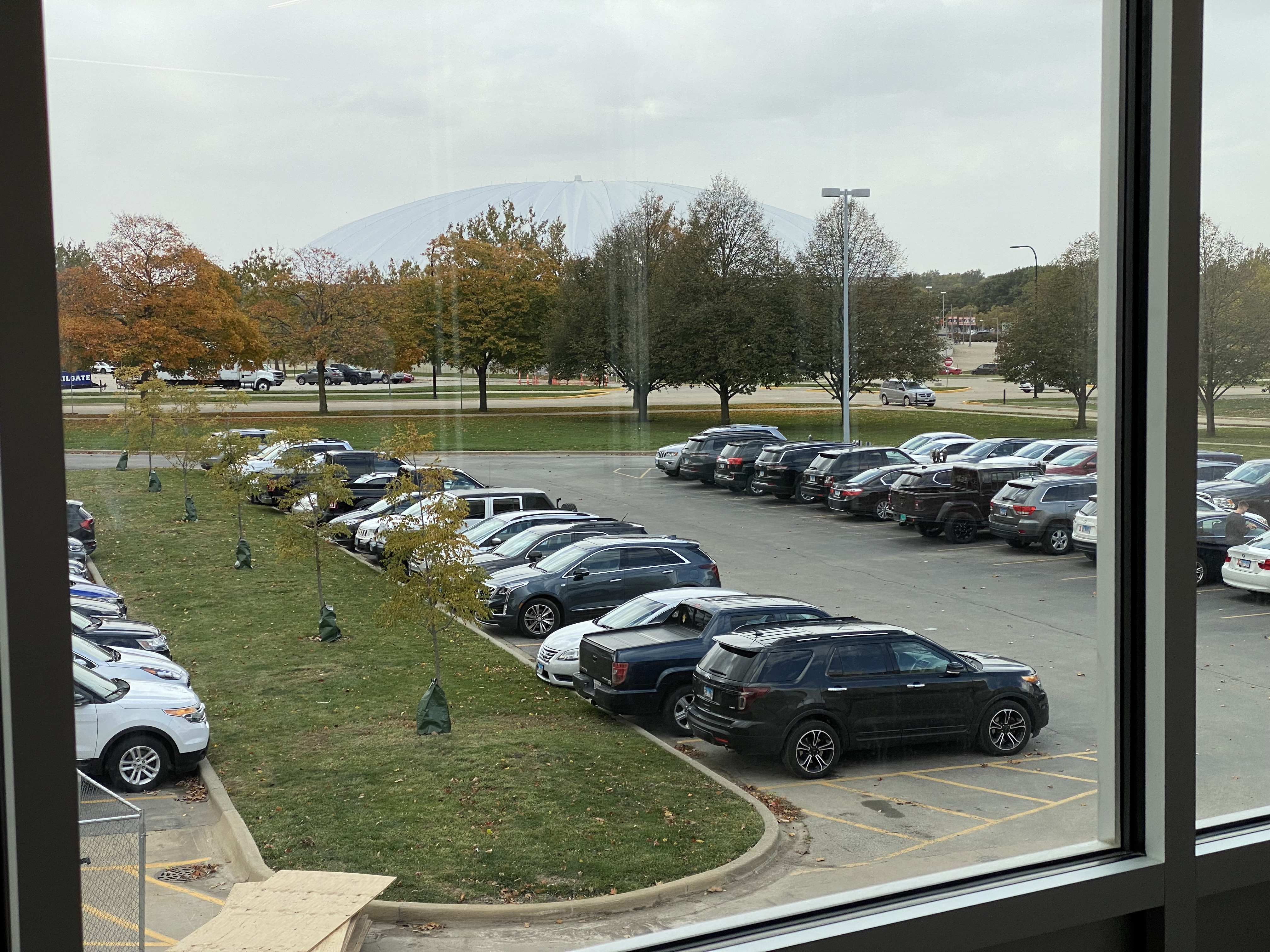 I will show you one more photo, though. Since they didn't put in my elevator (seriously, how cool would that elevator have been?), I have another "how to get Underwood to the court in a hurry" idea. What if, right here, there was a big slide. Like one of those waterpark slides but without the water. The head coach wants to go to practice. He jumps in the slide from his office (that window up there), it wraps around outdoors, and then he slides right out onto the court (just punch a hole through the wall right there below all of those ducts). THIS IS A GREAT IDEA, YES? 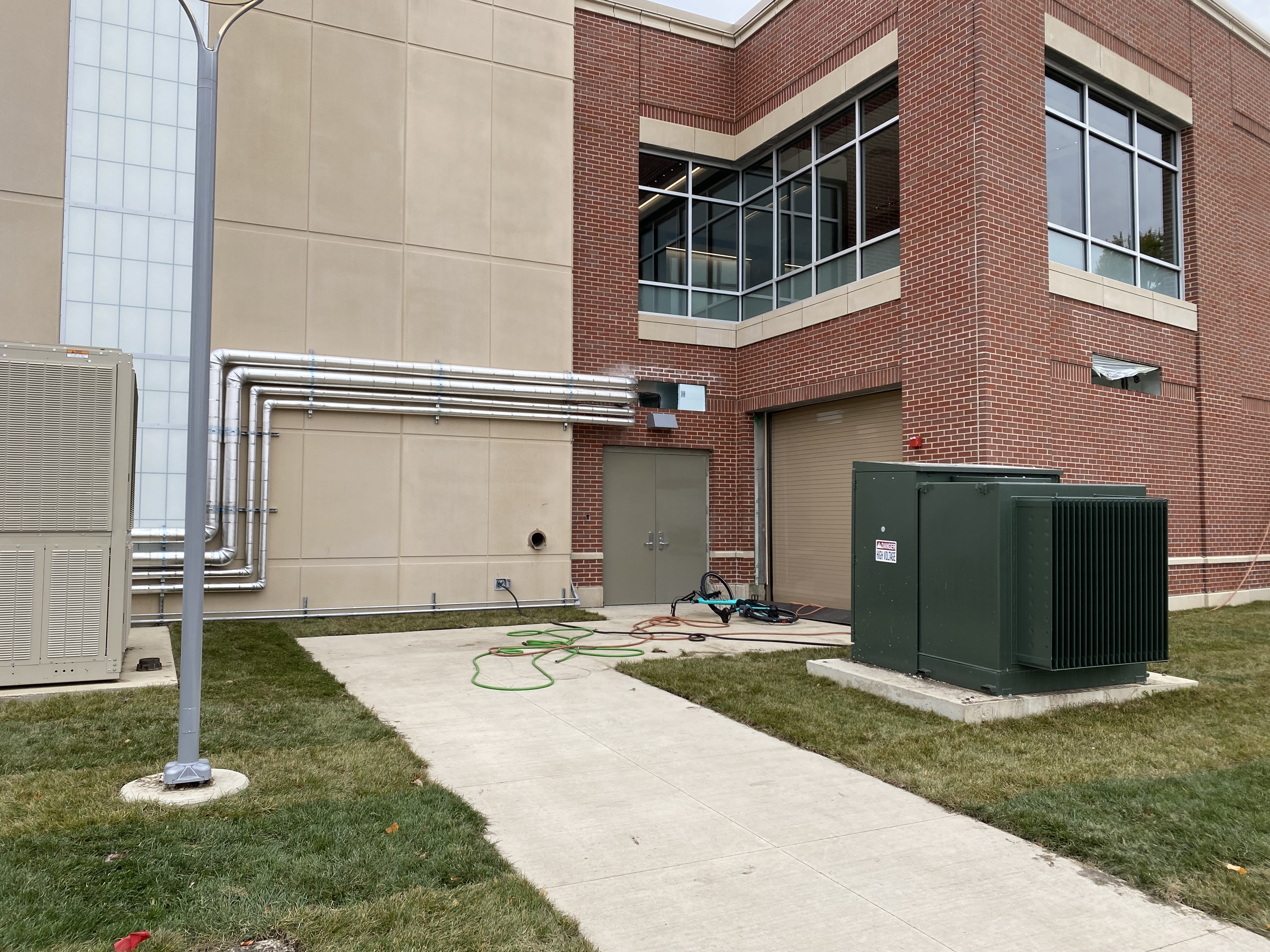 It's not a great idea.

The batcave elevator idea, though...

Is that what you were so earnestly discussing behind coach Green while she was making her remarks?

Sometimes I forget how funny you are

Overall I'm impressed.. But honestly this screams U of I. Nail the big picture but have absolutely zero focus on the little details that spoil the effort. Even Circle K would have branded the graphic on the fridge on the left. How does that not say Illini? Cool that he has his own locker room but the furnishings couldn't be less impressive. They look outdated and the contractor hasn't left the building. How hard would it have been to get a cabinet builder to make some piece of Illini themed wardrobe cabinet to go in there. It could have paid tribute to Lou and the other that came before him!! And don't get me started on that metal chair. $20MM and a freaking metal folding chair? Unless that is the gift to Lou from Bobby it has no place in the building! This is the media tour and no one has the brains to hide it? Amateur hour.

FYI its not completely done yet. Grand opening for the donors isn't until early February, there at lots of finishing touches to be completed yet.

Full-on clickbait title could have been "Downward Spiral" lol but nah I love articles like this sprinkled in with hardcore analysis and stats. One of the many reasons why I'm glad I subscribed.

I guess this kinda counts as basketball coverage. Serious injury to Goode in the "secret" scrimmage against Kansas and first exhibition game tonight on BTN+ and nada so far.