There's a lot of numbers to go through this week. So no clever intro here. Just right to the numbers. All I have to do is write a few lines of text that will show up on the front page of the site as normal text. If I include anything with a link (or even in bold text) it shows up all weird on the front page. So if you've ever wondered why I'm so intro-y, well, there you go. I've written enough words now, so let's get to the numbies.

We've reached the part of the season where you're beginning to wonder why we're not climbing in the NERDstats like we're climbing in the polls. We're now #18 in the AP poll but the SP+ has us at 30? SOMEONE GET ME BILL CONNELLY'S EMAIL ADDRESS.

So I figured I should begin this week's look into the numbers by talking (from 30,000 feet) about forward-looking numbers and backwards-looking numbers. Actually, I don't have to explain it at all because Bill Connelly has done that for me. Time for some quoted text.

On SP+ being "forward-facing" and not a look back at how a team has performed:

SP+ is indeed intended to be predictive and forward-facing. It is not a resume ranking that gives credit for big wins or particularly brave scheduling -- no good predictive system is. It is simply a measure of the most sustainable and predictable aspects of football. If you're lucky or unimpressive in a win, your rating will probably fall. If you're strong and unlucky in a loss, it will probably rise.

A simple way (my interpretation) to say that: it doesn't care if you won or lost; it simply looks to see if you're doing the things that winning teams do. And, just like KenPom for basketball, they include a certain percentage from the preseason projections for a long time (throughout most of the season) because if you didn't, your early numbers would have some weird outcome like "Rice is the #6 team in the country after two weeks". It will take a while for a Wisconsin or a Notre Dame to fall and it will take a while for an Illinois or a Syracuse to rise. And for good reason. Need to prove it's not a fluke.

Connelly leads nearly every article explaining that the formula is "forward-facing", but he still gets people screaming at him. Maybe some of you did some screaming at him on Sunday when the updated SP+ came out with Illinois at 30 and Minnesota at 10. "WHAT?? WE JUST DOMINATED MINNESOTA. HOW CAN YOUR FORMULA BE THIS BAD, BILL??"

That's not what a forward-facing formula is looking at. It sees that Minnesota has out-recruited Illinois, had more contributors returning this season, and had better numbers the first six weeks than Illinois. If you're wondering why Minnesota was favored by 6.5 going into this game, that's more-or-less why. Vegas sportsbooks have their own forward-facing formulas very similar to the SP+ (which are then adjusted by humans for things like "DeVito doubtful"). And they get it right more often than they get it wrong.

What's that? You want to know what Connelly's "looking back" numbers look like? They're right there in his weekly article. And we're 14th.

Here's how he describes his "Resume SP+" numbers:

As mentioned above, SP+ is intended to be a power rating, not a resume evaluation tool, but Resume SP+ attempts to fill that latter gap. It is a look at two things: (1) how the average SP+ top five team would be projected to perform against your schedule (in terms of scoring margin) and (2) how your scoring margin compares to (1). Throw in a seven-point penalty for every loss a team has suffered, and you can say that this is what the CFP rankings would look like if SP+ were in charge.

Feel better? I certainly do. After 7 weeks, we are the 14th best team in college football.

Will Whitman extend Bielema this week or next?

This chart on CFBD hasn't been updated since last week so I put a little dot right where the current 2022 score (10.8) would be. Take that dot and trace it back to your birth. 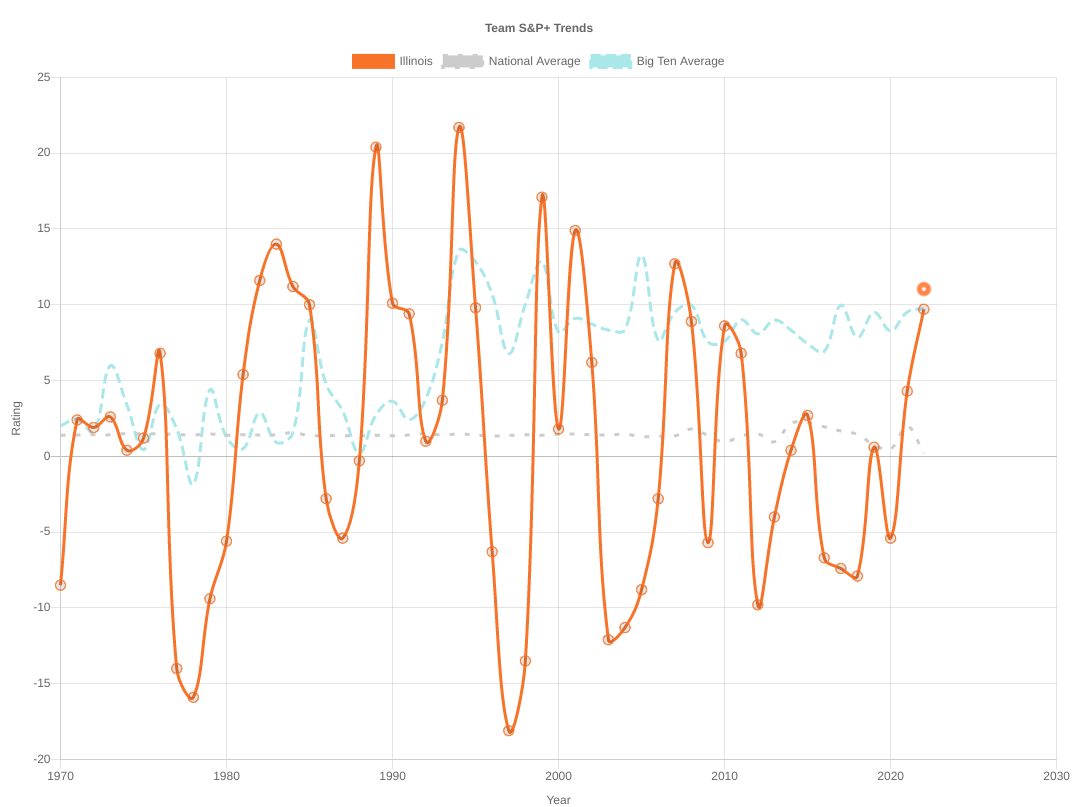 Keep in mind that preseason numbers are still holding that down. If we continue playing like this, it will keep rising and rising and rising. By the end of the year, all of the preseason assumptions will be gone and that number might be... way up there.

Here's another way to look at this. The Illinois line vs. the Northwestern line: 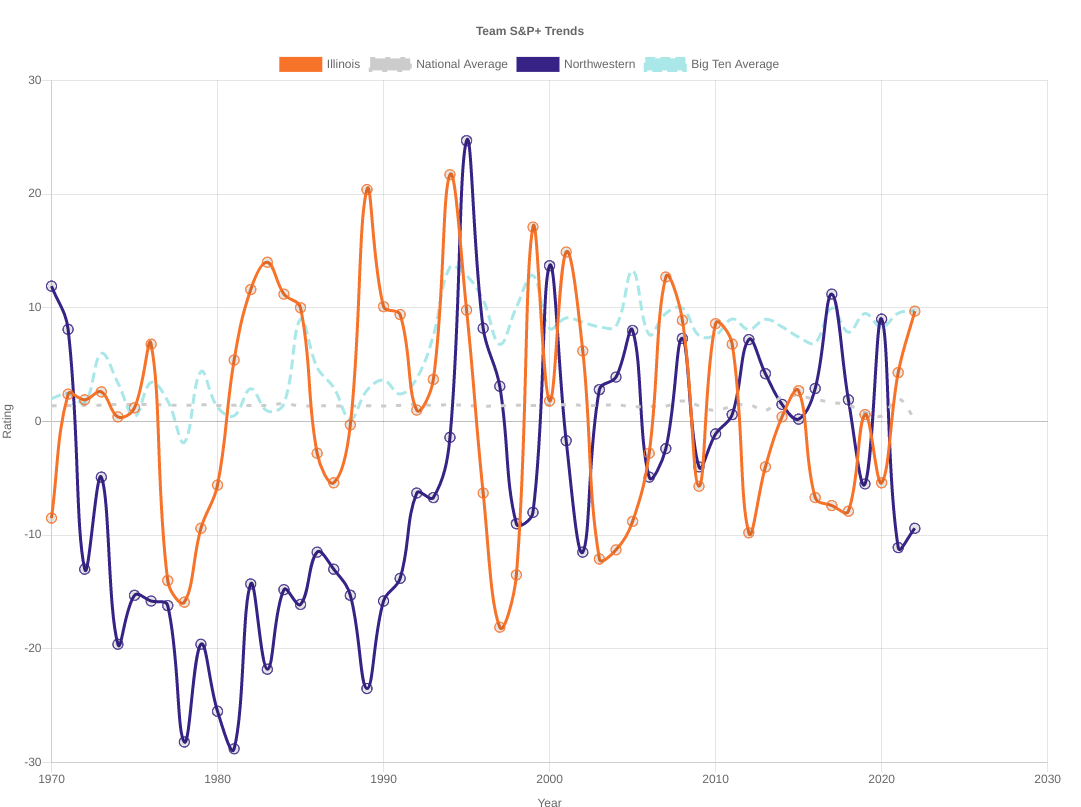 One more thought before moving on: the Covid Season really did a number on Northwestern fans. Take that blip away in 2020 and they've been in steep decline ever since 2017. But that one-year blip (in a year with wildly-incomplete data) kept all the purple people thinking that everything was fine.

(Everything is not fine. Northwestern has "improved" this season... to the level of 2012 Illini football.)

I know you're all here for the INI so let's get to it. And keep in mind, most of these are forward-looking like the SP+.

The four metrics that go into the INI:

And here's our current ranking in each:

This is the hardest one for me to process. This is just a formula here, not the opinion of someone. And I can't comprehend it. The FEI projects our wins this way:

Odds that the Illini will finish with...

Again, just a formula. It looks at who you've played and what you've done in those games and says "teams that play those teams and to that well are probably going to win XX games". And yes, I put two X's there instead of one because we might win 10 games.

I'll just make a list of the things my brain says when I look at those numbers:

What ever it takes to get Bret to know he is appreciated and wanted here.

anyone have a quick comparison to other HC salaries in the big ten? or what might be seen as a "next up" spot for BB? In other words comps with similar programs and next level up programs

TYPO near the bottom. Should be as follows:

Your first chart shows why I think of the early 80's as our best years (plural) because we sustained good performances for multiple years in a row. Since, then we've had one year bursts that were higher but we immediate dropped back toward the mean. That same chart would be very interesting if there was one more line graphed on there - age/experience - to test your theory of "get older, stay older". I think we all expect this team & staff to be able to sustain multiple years of success.

I'll just note down here that the Projected Wins section is updated.

Does FEI include projected bowl/championship games in win projections or are those numbers just regular season?

FEI also shows that we have a better chance to win the rest of our games including @ Michigan than to only win 1 more. Crazy!

Bill Connelly was just on The Solid Verbal podcast and just flat out said that his model is still catching up to Illinois. Said they’ve overachieved every game except Indiana. Found Illinois more interesting than Kansas.

The 1994 team and corresponding SP+ number proves that Lou Tepper was the worst hire in Illini history and maybe solely responsible for everything that followed.

Illini were coming off 3 straight bowl seasons. Our coach was hired by Texas!!!

Seemingly, Guenther could have had his pick of nearly any coach in the country and he chose the least charismatic DC in history. Awful.

That guy then ruined my college years (and Robert's) and most of the next 25..