I'm really glad you people understand my shorthand. If someone just stumbled on this site today and read "SOC - UTSA" they'd have no clue what I was talking about. They'd probably try to pronounce it "sock utsuh" or something.

I guess some of you might not be familiar with what it means. And if this is your first time, you've clicked past the jump and you can still read because it's only your first click this month. So I'll try to explain it to you.

SOC - UTSA is an acronym we use around here. It means Springfield Or Champaign? - Uncle Tim Says Arcola.

I just totally made that up. I'm sorry. You're new. I shouldn't do that to you. It means Standing On Counter? Under The Sink, Actually.

I'm not really sure how to feel about this game. We're all thinking about the games like this we've lost in the past. There's something that makes this feel like this is one of those games again. It would be so us to beat Nebraska and then lose this game. I mean, I can list them off the top of my head:

In one sense, this feels like another one of those games. Especially since the line is down to -4.5. Home field advantage is usually three points so Vegas sees this game as Illinois being 1.5 points better than UTSA. Am I supposed to feel confident about a game where a plucky small-school opponent coming into Champaign is only a 4.5 point dog? I'm pretty sure we've lost to every plucky small-school opponent since the Clinton Administation.

In another sense, we told Nebraska how the game was going to go and then we didn't let them wrestle it away. We dictated last Saturday, and we never dictate. If we can dictate to Nebraska, we can dictate to a school with a bunch of 2-star recruits.

So I really don't know how to feel. I didn't get to watch camp this year so I don't have 1/5th the "feel" I usually do about what kind of team we have. I figured Nebraska would put us away last week, I had them winning 31-20. We won 30-22. So if we completely flipped that script, does that mean that 2021 will be The Year Of Flipping Scripts?

Like, the script for this game was written in the stars centuries ago. Illinois beats conference opponent, feels pretty good about where the season is headed, takes on plucky small-school opponent, and loses badly to kill all momentum built last week. I watched games like that in 1993 and I watched games like that in 2012. We all know what happens the moment we have the thought of "you know, if we win this one and then somehow win again next week, every single door is open to us". We 100% know what happens next. We all have the script framed on our wall.

But maybe I should lean into "The Year Of Flipping Scripts"? Maybe, since I don't have the "feel" I'd normally have, I should just take this entire season and go with the opposite of my gut. Pull a Costanza. My instinct is to think Illinois falls flat on its face after an emotional Week Zero win, so I'll go with the exact opposite and predict a win. That feels right for some reason.

I mean, it doesn't make any sense. Our QB is out, there's rain in the forecast, and it might be that sloppy, turnover-heavy game that has haunted us for decades. So I should lean into that, right? That's what we always see.

Or should I just say that we're flipping the script and will put away the opponents we need to put away? That's what we did last week, and this team does seem to have a really good vibe right now (even the player interviews feel different). I mean, I really should lean into that chart I made for the newsletter this week. Let me link it here for those of you who don't get the newsletter: 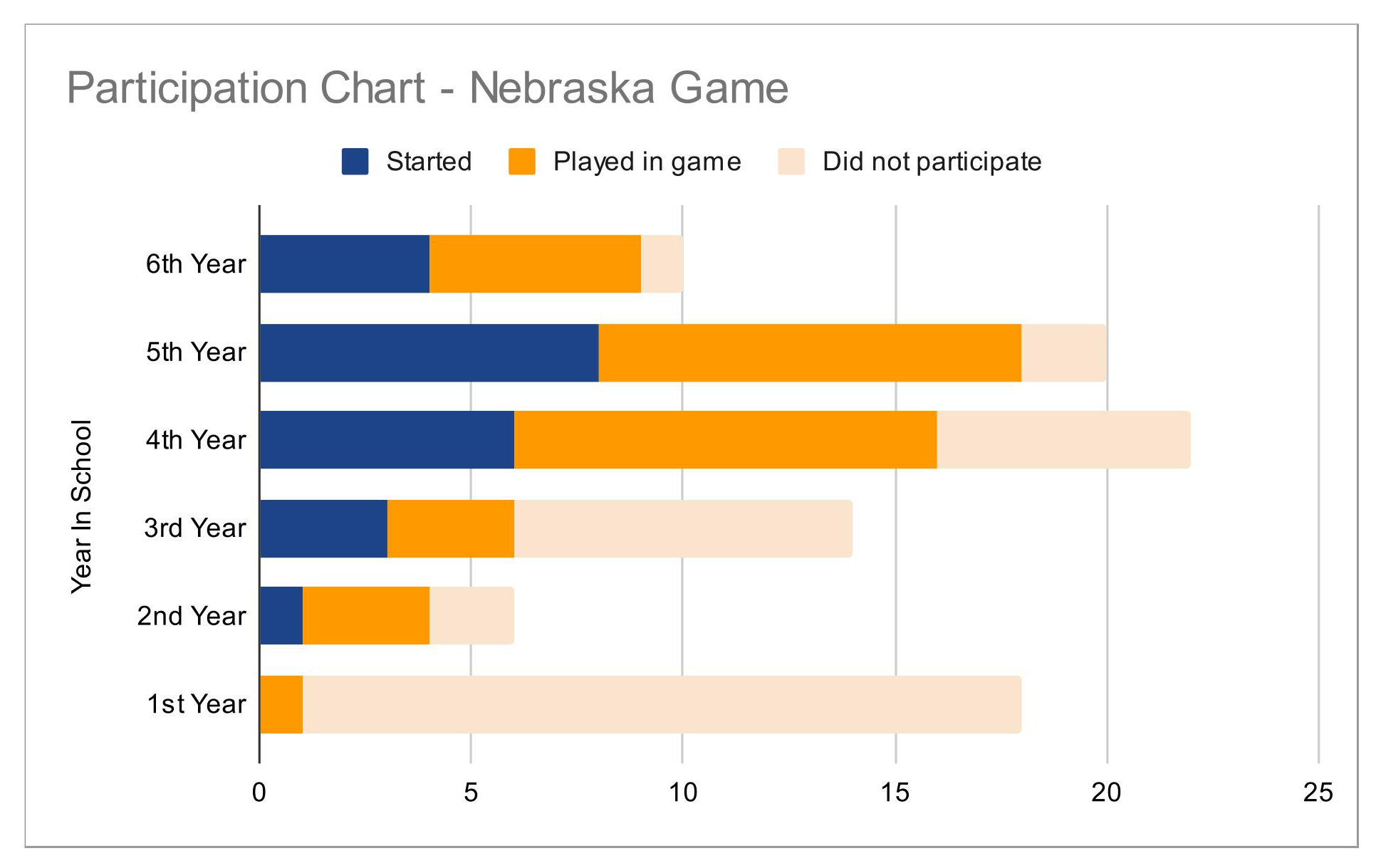 Look at all that old. Only one first or second-year player started the Nebraska game (Jer'Zhan Newton), 27 fifth and sixth year players made up the majority of the rotation, and even the third-year players only saw six guys find the field. Wouldn't it make sense for a team that old to be the one to flip the script?

OK, I need to try to stop talking myself out of this flip the script thing and just say that this team is flipping the script. Tomorrow is still a battle, and this is still a plucky opponent, but late in the game, we chew up clock, wear down their defense, and put the game away. Script flipped.

Class of '92. Took my youngest brother to campus for the SJSU game. Contrasting that with beating OSU five times in a row and he was appalled by my end-of-game diatribe. Still chose UI. If only he knew the pain of being part of the high water mark... .

I'm with you. But it's more about Coach Bielema than anything else. Things are different this year. And the really good news? I got last week right with a prediction of Illinois 31-24, and won $80 while I was at it.

Agreed—competent. No one has said that for so long.

Also, as your IRS agent I would like to think you and ask a few questions: what car did you learn to drive stick in? What teacher made you laugh the most and how far do you now live from where you were born?

This Illini team seems less susceptible to wide swings from high to low (and vice versa), mostly due to sound coaching but also the maturity of the players. I just don't see the kind of letdown for a game like this that we saw under the prior regime. So in that sense I am on the Flip-the-Script train as a fan. I question how much insight the odds-makers have compared to those of us who follow the team as closely as we do. So even if we don't win tonight, I do not expect to see us laying an egg.

Only to help make the flip the script point this year the plucky small school is getting picked to win this game by seemingly every gambling based product as well as the public. This is different because in years past Illinois was always picked to beat/cover plucky small school. They don’t trust us right now, because we’re Illinois

Did we beat Nebraska because we play good football or did Nebraska just give the game away? Vegas apparently thinks Nebraska butterfingered the game away against us and sees UTSA as less mistake prone. Given that we're starting our second-string quarterback and our defensive player of the game from week zero is out for the season I can see the skepticism. Having said all that, which Robert actually did better being the professional writer, I'm going to go with us being equally competent at football and having better running backs than UTSA. Illinois 35 UTSA 17..

I was at the Nebraska game and have rewatched the game twice. Even though I knew the outcome, both times I rewatched it I was "oh oh, we're in trouble". I didn't see an Illinois team dominating. I saw a Nebraska team that made the biggest mistakes at the most inopportune times (and missed a lot of wide open receivers).

I too am having trouble turning the script...because we haven't turned the script in so long.

I am bought in to Bielema and Staff. I so much want them to be successful and to use this game to show we're on the upswing. Coach and Team, please make me a believer instead of a doubting Thomas.

While it's true that we've lost our share of games to non-Power Five teams in the last two decades, we sure have won plenty of close ones as well:

By my count Bielema is 39-1 against non-Power Five opponents in his career (not counting the 2010 Rose Bowl loss to #3 and undefeated TCU, who joined the Big 12 two years later). Most of those 39 wins were blowouts - hoping we see more of the same at Illinois...

If pronouncing it "sock utsuh" is wrong, I don’t want to be right.

Robert, I prefer your SOC rather than your SOSN.