So I started thinking "surely the game played at the private HS in Connecticut was the turf field and this is another game at an opponent's field." But I was wrong. That's the St. Thomas More football field.

(Don't worry - this isn't a "LOL look at the facilities" post. Stay with me as I head down the rabbit hole.)

Brian Allen Jr. played his first two years of HS football at Marian Catholic in Chicago. Because I'm from St. Louis, I only know of Marian Catholic as The High School That Had That Massive Marching Band 30 years ago. I was at some band competition in 1990 and we stuck around to the end because our band director wanted us to watch Marian Catholic perform. That's neither here nor there.

In February, Allen transferred to this private boarding school in Connecticut. I don't know if it was because of the questions around high school football in Illinois (a month earlier he had been tweeting a bunch of the "let them play" stuff that was all over social media at the time as the state decided whether to allow any sports to be played), but he left Chicago and headed to this tiny boarding school. I say "tiny" because I looked up their website and: 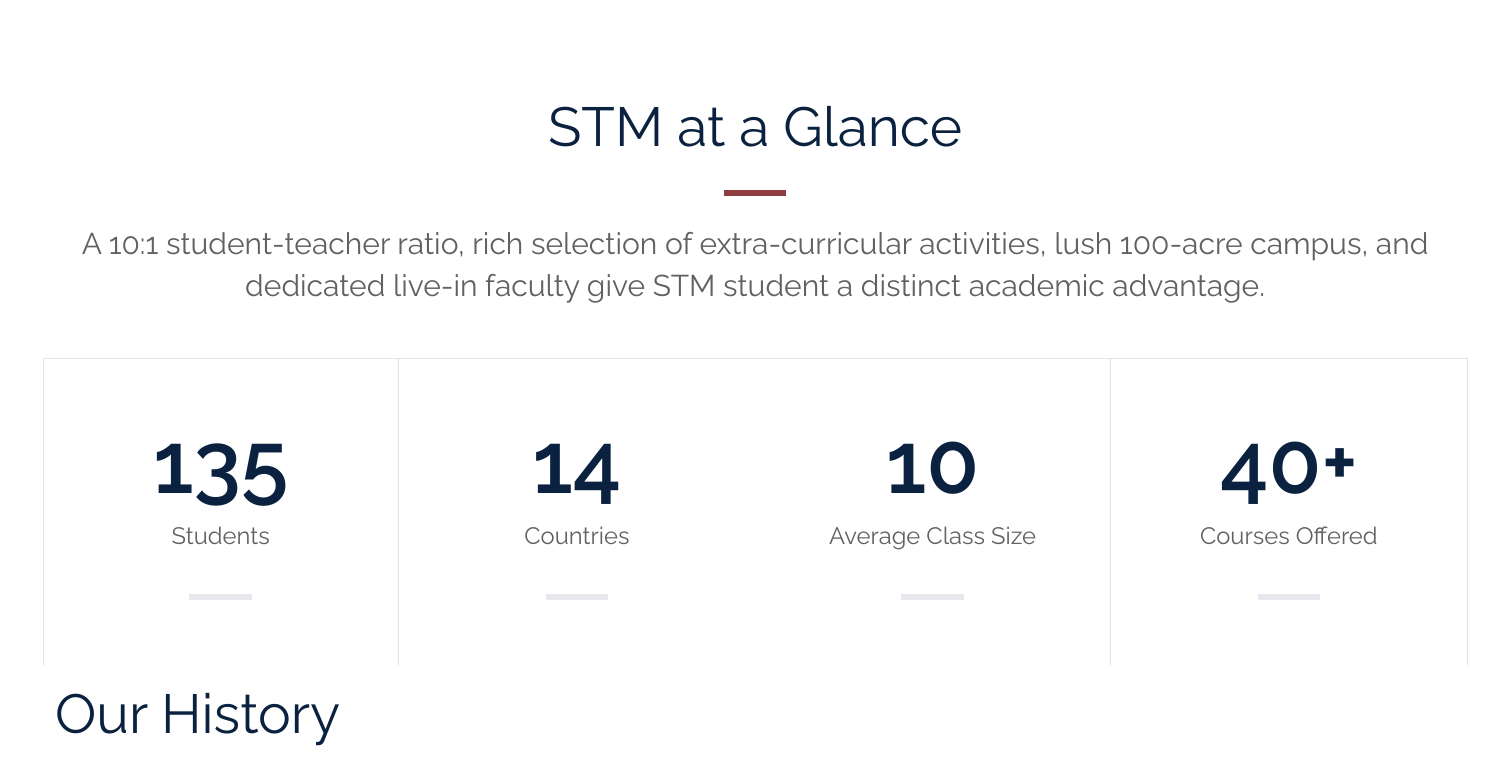 I think a high school of 135 students should be considered "tiny". There are Texas high schools with 135 players on the football team.

So I keep digging. We've seen players transfer to IMG Academy in Florida before heading off to college. Their facilities (and coaches) rival some small colleges. But something didn't compute about transferring to a high school that plays games... in a field? Across from someone's house?

I looked at aerial photos to verify that this was the St. Thomas More football field. Here's their campus on a lake in eastern Connecticut: 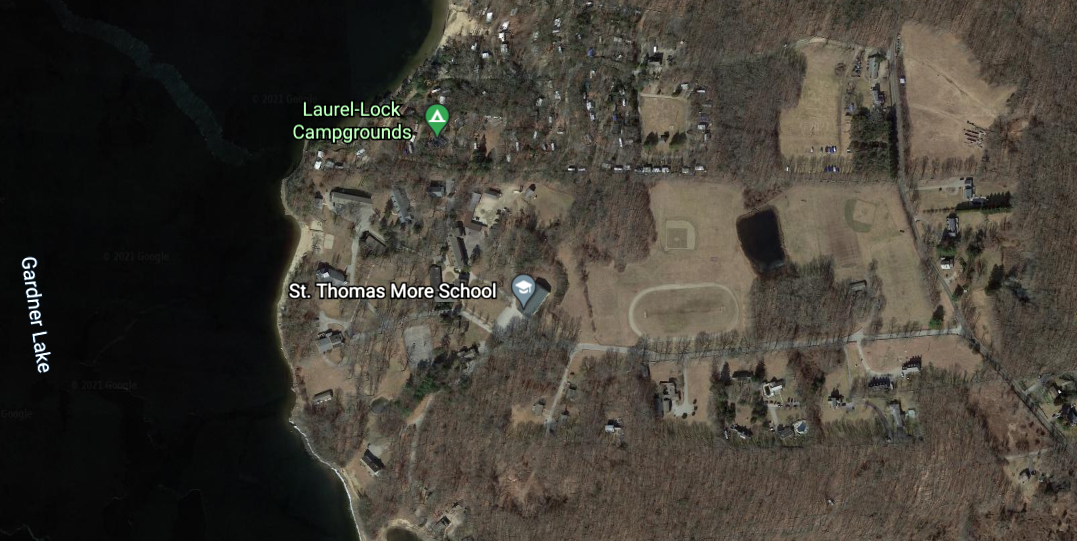 I mean, I'd go to high school there. Private boarding school in Connecticut? 35 movies have been set there. And I've always wanted to go to those high schools.

On the campus there, over to the right, out by the road, is the football field: 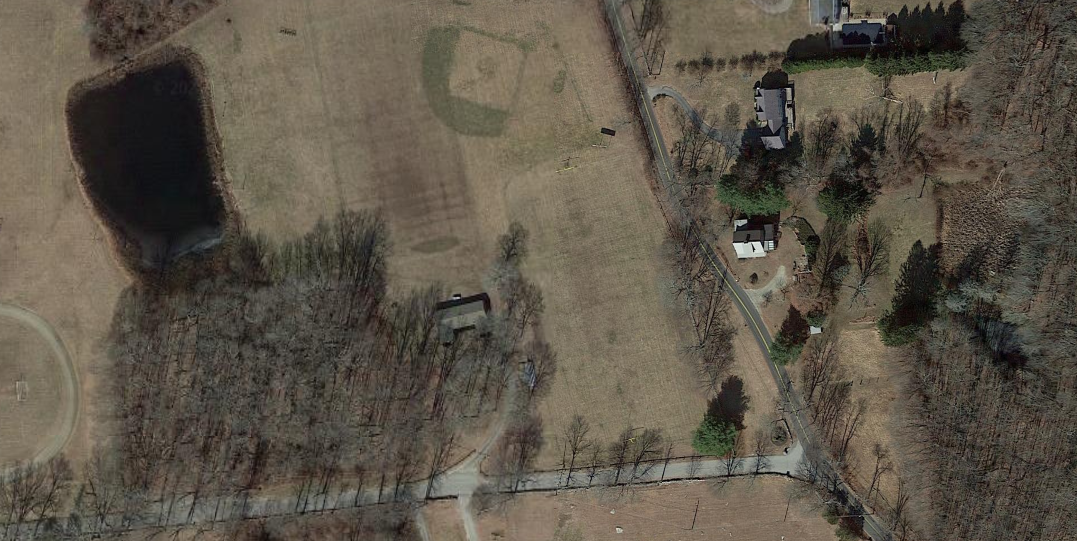 Looks like there's a practice field up there by the baseball diamond and then the football field where the games are played is right there in the center of the screenshot. I'll cut out everything but the field. 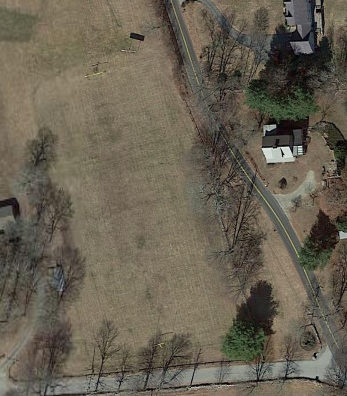 You can see the shadow of the scoreboard there near the top. And that's the same scoreboard you see in the image at the very top. So yeah, that's where their games are played. One tiny little set of bleachers (in the trees to the left) and that's it. Cars can park there and watch like a drive-in movie, I guess.

I needed to know more, so I look for news articles. Here's some stuff I found.

St. Thomas More has a reputation as a basketball school. It's where Andre Drummond (UConn, Philadelphia 76ers) went to high school. They've had five NBA players in their history. So this is not some Bishop Sycamore situation. This is a real high school that has produced professional athletes.

After becoming a basketball factory, I guess they started the process of attempting to do the same with their football program. I found this article from the Hartford paper about the coach who was trying to build the football program. Here's a snippet from that article:

Tyler Rudolph is less than a year away from playing in one of college football's largest and loudest stadiums, and practicing in a state-of-the-art weight room.

Rudolph, a four-star safety committed to Penn State and Waterbury native, will play his home games at Beaver Stadium, which holds upward of 106,000 fans. Its facilities are among the best in the country.

At St. Thomas More in Oakdale, the weight room is no larger than a classroom. The field isn't much more than a grass mound. And the team has been historically poor when it came to playing football competitively, but the school still appealed to Rudolph.

"A new start," Rudolph said, giving his reason to attend St. Thomas More. "Every other prep school either has a championship or before they had a team that went to the playoffs. Here, we didn't have either of that … there was no hype to it. It's always good not going with the hype."

Coach Jeff Moore, who took over the Chancellors prior to last season, faced an uphill climb to being competitive in the NEPSAC. The year prior to his arrival, the team was 1-6. The school's facilities didn't hold a candle to its counterparts in the state of Connecticut alone.

"Our facilities compared to everyone else, we're definitely in the bottom tier," Moore said. "Most places, their practice field blows our game field out of the water. I'd say it's sort of an 'us against the world' mentality, and our kids like that."

Moore is no longer the coach there. He moved on to another private school in the northeast. And the coach who replaced him, former Iowa player Jason Manson, was recently hired by the Hawkeyes (who were also recruiting Allen). I'll leave that one alone.

So I don't know how the "do with football what we've done with basketball" thing is going for St. Thomas More. They've sent players to Michigan, Penn State, Florida, and Arizona in the last few years, so it must be going OK. But they still play games in what can best be described as an open field with some lines painted on it. Maybe I'll take a trip this fall to attend a game at St. Thomas More. I'll watch from my car on the sidelines and everything.

Don't get me wrong here. Prep schools are great. I don't know if this is the case with Allen, but the article mentions how Rudolph "needed a little more academic prep before making the leap to college", and private schools like this fill that gap. Again, I'd kill to go back to high school and end up at a New England boarding school (mostly so I could get in fights with Artie whose dad is the district attorney and gets him out of his assault charge after he beat up my friend Scott but that's OK because in the end Artie's girl chooses me while Artie's dad gets caught in an FBI sting operation).

What's that? This is supposed to be a post about Brian Allen Jr? You're right. My apologies.

One year ago today, on the first day that coaches could contact 2022 recruits directly, Brian Allen starts tweeting the graphics he's getting from different schools. Wisconsin, Purdue, Syracuse, Cincinnati, and a bunch of MAC schools. Then he gets his first offer on October 6th from Toledo. He's supposed to be in his junior year at Marian Catholic at this point, but the season was postponed.

The next day he gets his first Power Five offer from Iowa State. He also gets offers in 2020 from Miami (OH), Central Michigan, Eastern Michigan, and Northern Illinois. On February 13th, he announces that he's transferring to St. Thomas More in Connecticut. He plays two games in the spring and then participates in a Rivals camp on May 16th. In June, once recruiting opens back up for the first time in 15 months, the offers roll in. Illinois, then Purdue, Kansas, Virginia Tech, and Iowa. He names a final two of Illinois and Iowa and then picks Illinois on August 23rd.

Just from a "where should we be recruiting players?" standpoint, that's where we should be fishing. Illinois kid at a private school in Connecticut with Iowa, Iowa State, Virginia Tech, and Purdue as the main competition. Works for me.

Film is... difficult to evaluate. There's only two games from his junior season (and the competition in one is, uh, less than stellar). So I'll just pull a couple clips. One from this past (spring) season and one from his sophomore season in the fall of 2019.

Here's one from this season:

Again, the competition is bad bad bad here. There's other film of him beating this offensive tackle repeatedly but that's because he's a D-I athlete lining up across from a kid who might not start for a 3-7 1A football team in Illinois. But on that film you can see that he's big (260 lbs as a HS junior) and also mobile. If he can chase down a QB like he's a 190 lb linebacker, he can play defensive line in the Big Ten.

And here's one from his sophomore year. He doesn't make the tackle here, but it doesn't matter. He'll be on the interior of the defensive line at Illinois, and battling his way up the field with two guys trying to stop him will be the name of the game.

Athletic and mobile. You love to see it.

There was a big need in this class for defensive linemen, so this is a really big get. One of our top targets there, head-to-head with Iowa, and we landed him. He'll likely play that Keith Randolph/Johnny Newton position, so he'll need to get his weight up to 280 or so, but that's not a problem if he's 259 as a high school junior.

So yeah, another solid get. I was worried about this class back in May, but the last seven or eight recruits have all been "head to head with power five programs ahead of us in the pecking order and coming away with the verbal". You really love to see it.

Enough to get somewhere between 3 and 3.5 Cruises. Let's see - I gave Alec Bryant and Jared Badie 3.5 Cruises. I think Allen is a slight step behind them, but not much. So let's go to the quarter Cruises again.

He has a real offer list. To me that matters the most here. His film and everything else is comparable to an unknown recruit but his offer list includes schools currently above us in the pecking order. And they appear to be legit offers.

Happy to have him Maybe evals from workouts, camps, some film out there? Offer list does look strong

He got his offer after camping at North Central College and our coaching staff seeing him there.

I am really loving the use of Google Maps screenshots.