If you haven't read Part I, none of this will make much sense, so go read that first. Then come back to this post for the pretty pictures.

I should also note the source here. All of the renderings come from the I-Fund's Ubben renovation website. They were produced by HNTB, the Architect on the project.

OK, right to it. Let's start with Underwood's office and work our way around from there.

Actually, wait, let's start with an aerial photo. Someone asked in the comments yesterday exactly where Ubben is located within all the athletic facilities. I pulled this aerial from Google maps (taken when the SFC was still under construction) and put some labels on it. Other items that are new or under construction since then: there's now a soccer stadium next to the track (noted on the plan) and there's a baseball building under construction as well.

All four walls of Ubben will be pushed out to expand the facility. They couldn't go too far to the west because that's where the Bielfeldt admin building sits. They will be pushing the expanded facility fairly far south, so that entire parking lot area will need to be reworked.

The north-south road there is 4th Street. The east-west is St. Mary's Road. So that's South Farms to the south and the Atkins Tennis Center over to the east.

OK, now to the renderings. As noted yesterday, the "sides" are flipping here once the renovation is complete. The men's team will move over to the west side of the building and the women's team will move over to the east. And in that new second-level office expansion to the south (basically all the way out to the parking lot on the image above), Brad Underwood's office will now be on the southwest corner of the building. So yes, his windows will look out at the State Farm Center.

Here's the plan for his office: 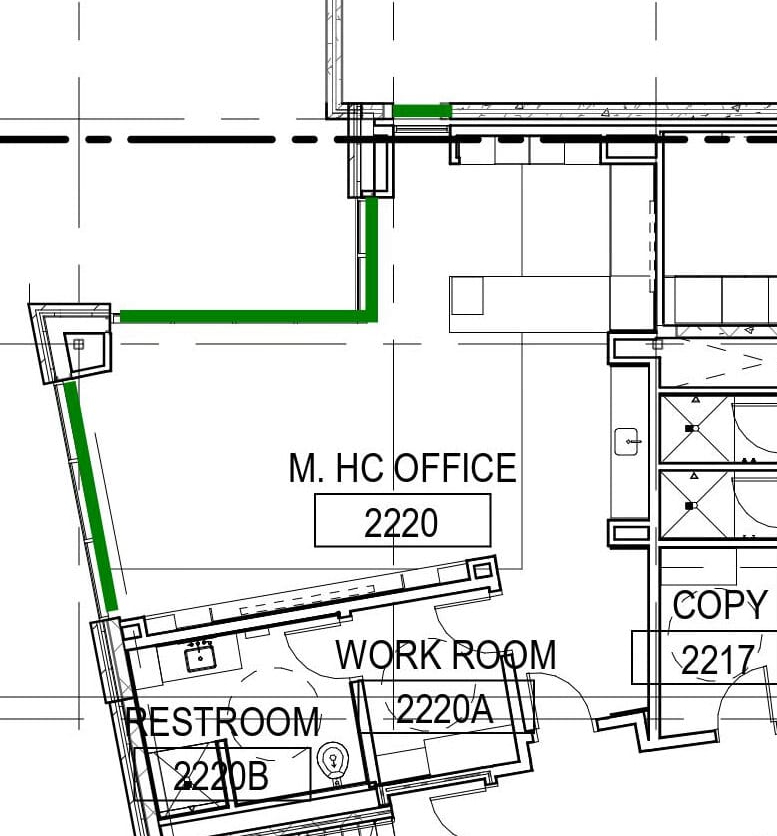 And here's the renderings: 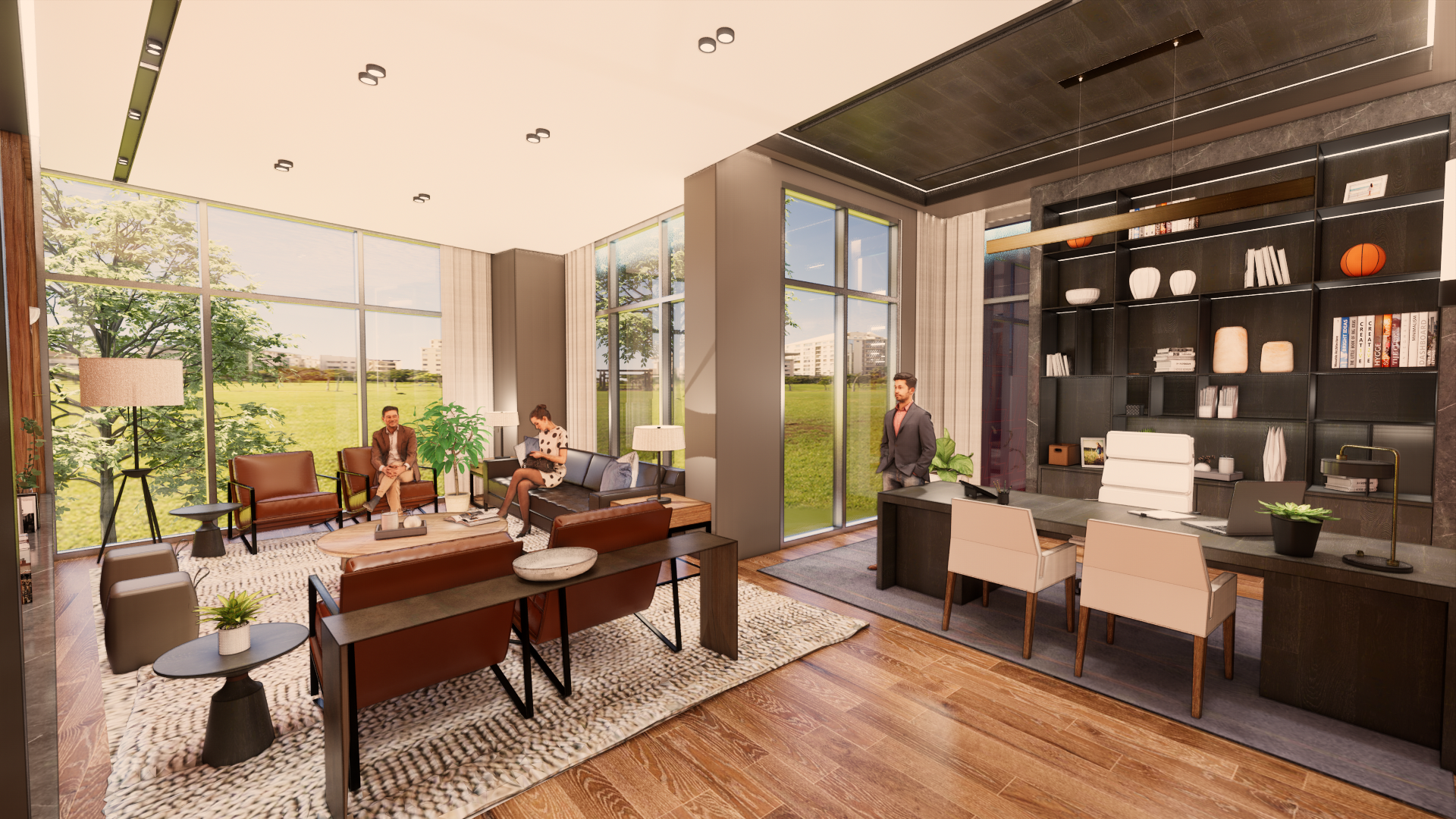 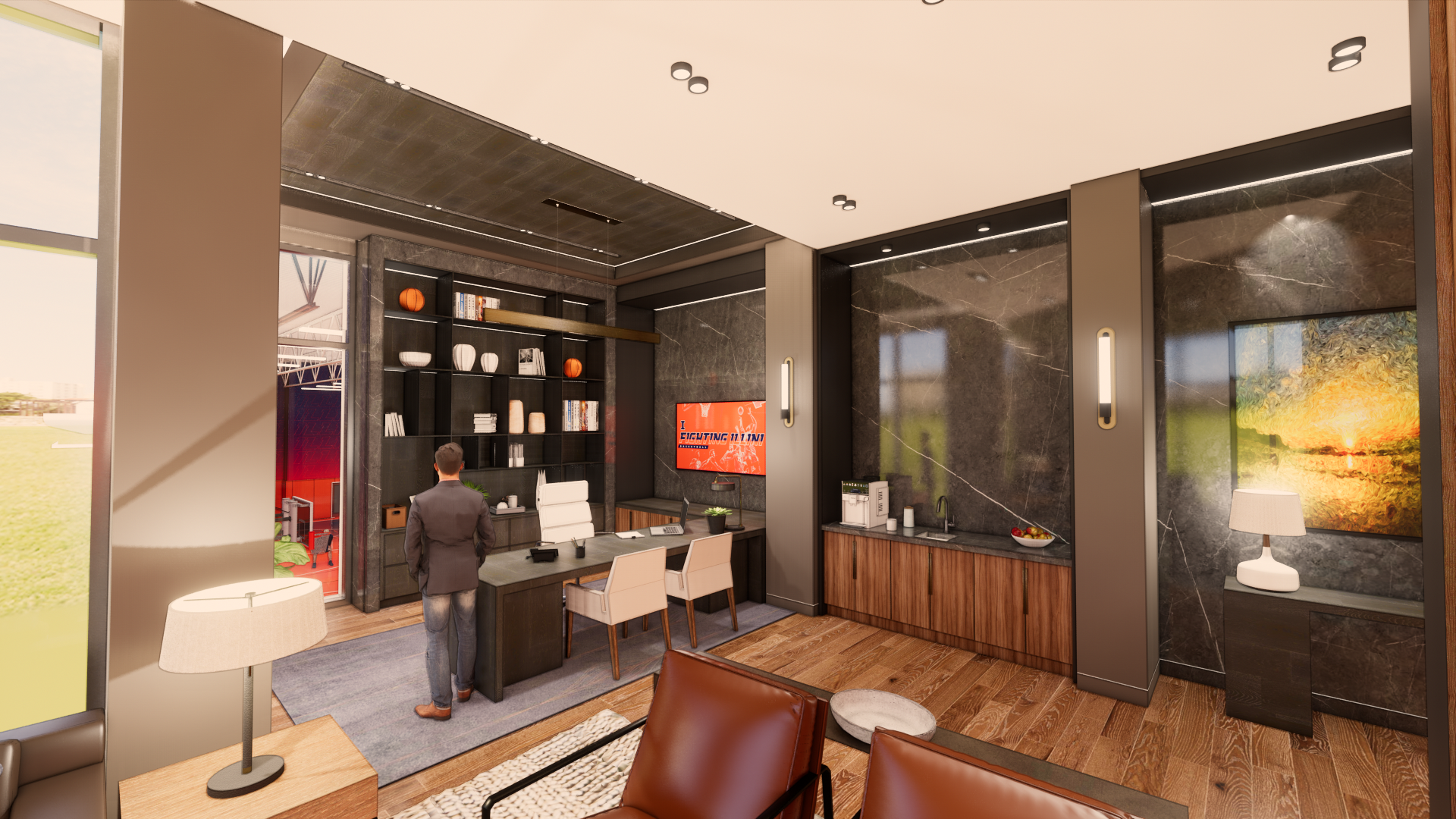 See that little window there? The window the guy in the faded jeans seems to be looking towards? That's a window from Underwood's office out to the practice courts. Nancy Fahey will have the same window on her side of the facility.

You can see that same window in some of the other renderings. Here's the rendering of the expanded practice court for the men. As you can see, the existing gym stays the same (for the most part). The outer wall is pushed out and there will be two half courts added on the west side of the facility.

And if you look in the corner there (above the door in the far corner), you can see the window into Underwood's office: 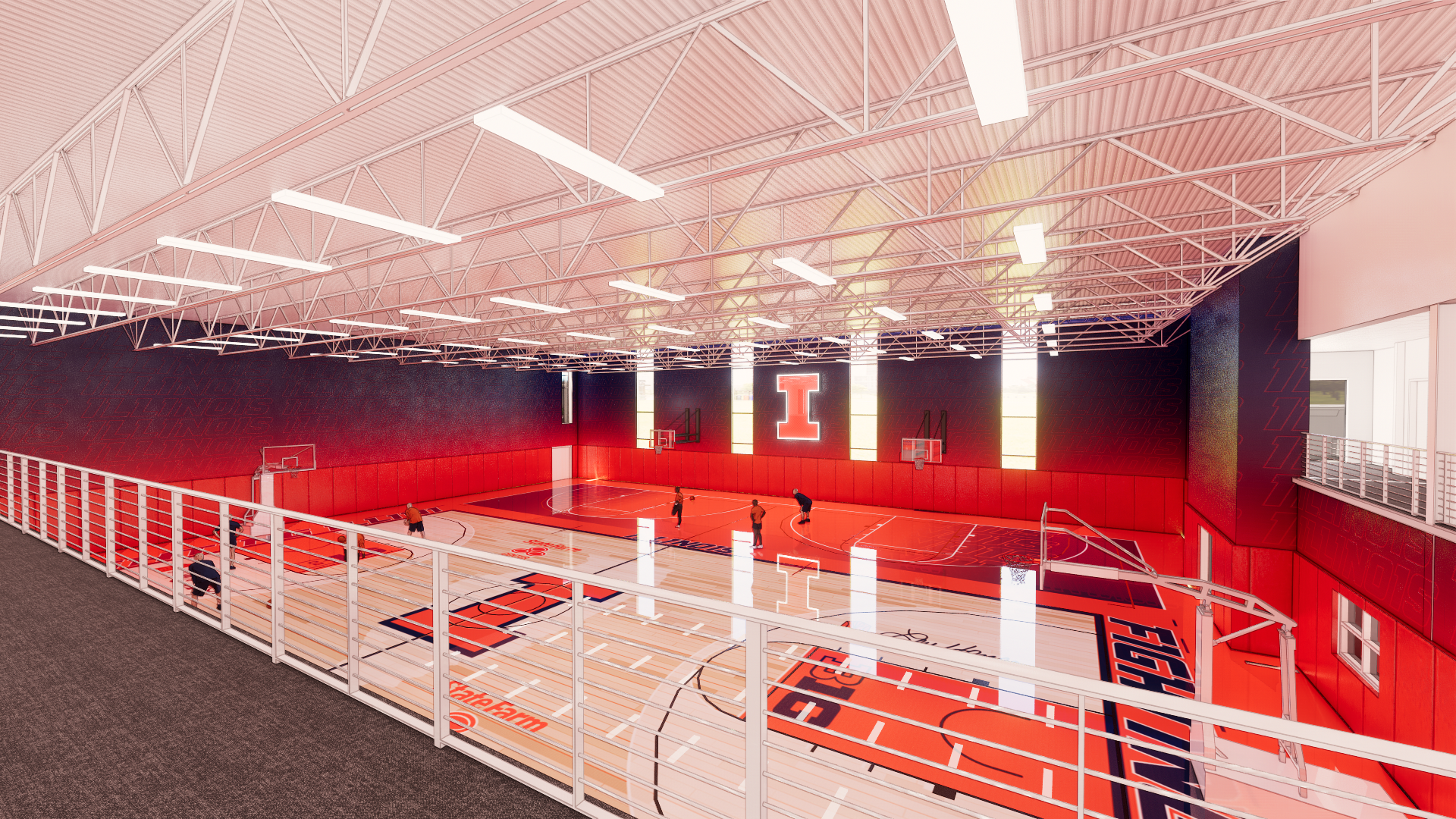 Here's what the courts look like in plan view: 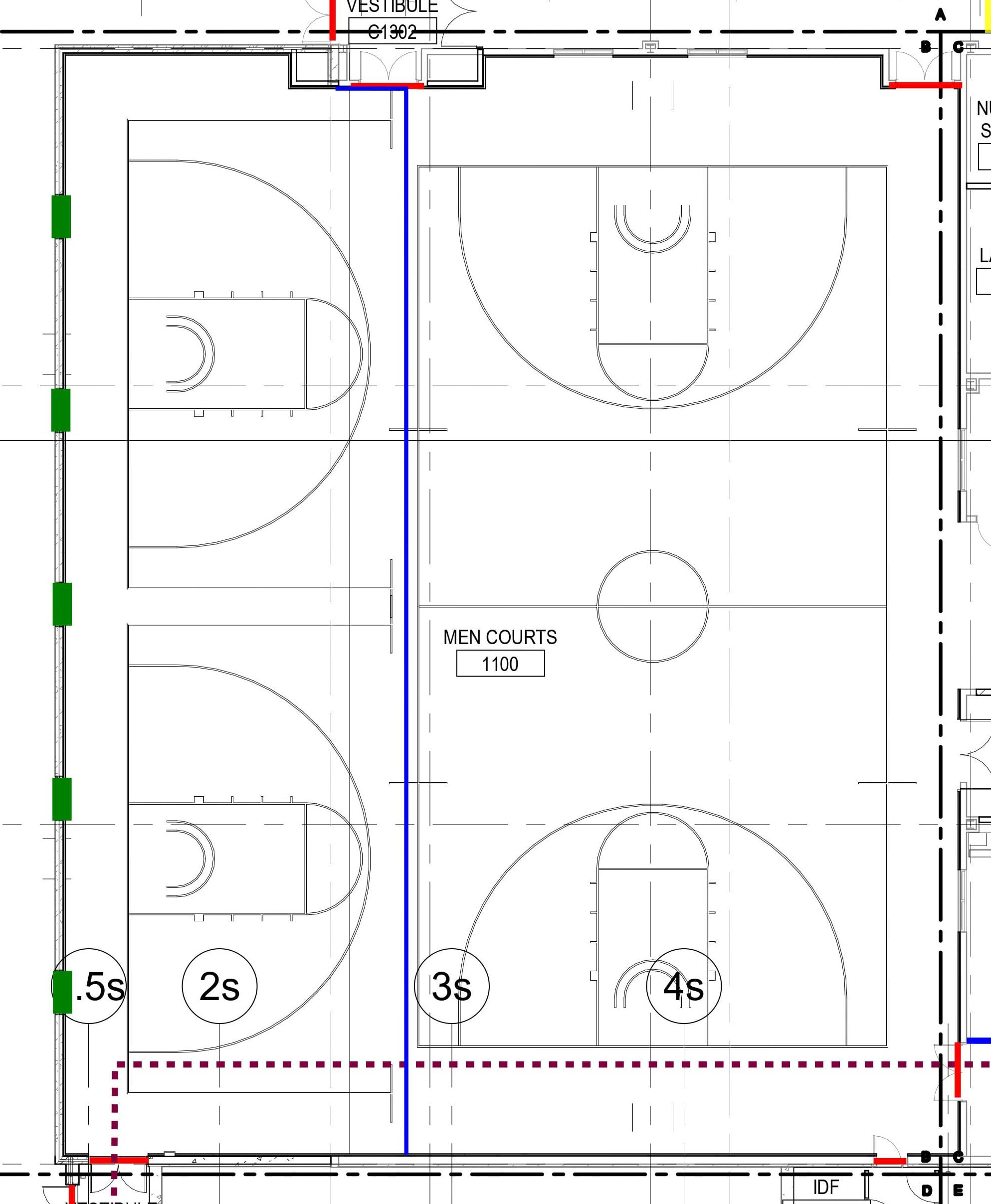 And here's a view from the court level. See where it says "IDF" on the plan above? This rendering is from the perspective of standing in that corner of the gym. Also, this HNTB intern LOVED the shiny floor feature in their software. 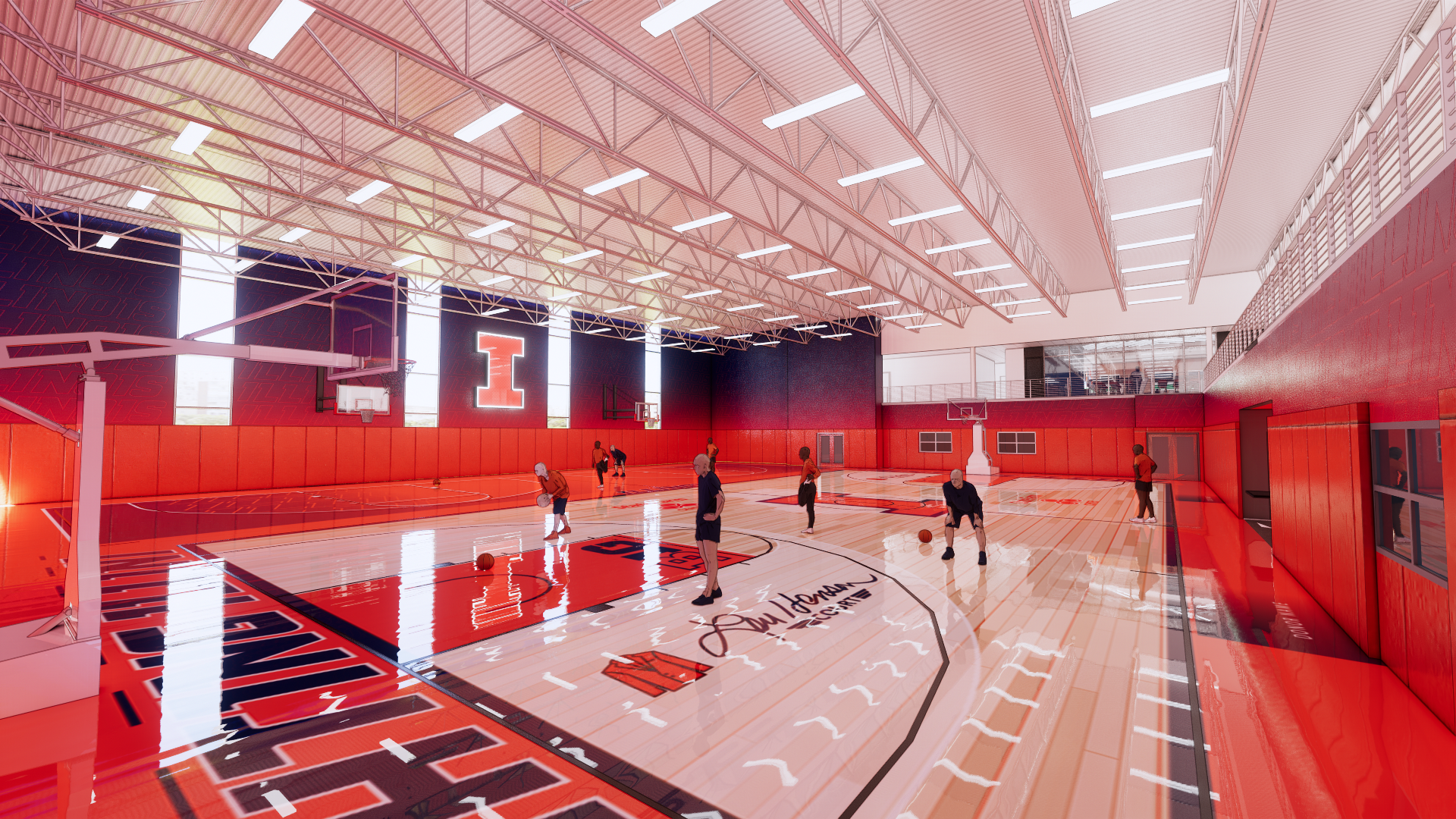 Let's move to the other end of the facility so we can look at the new bells and whistles. As I mentioned yesterday, this expansion to the north (new locker rooms, new sports medicine area, new team lounges, new team showers, new weight room) is where the majority of the enhancements are found.

On the very north end, along a wall of windows looking out onto Lot 42 (and, eventually, the new baseball facility), is Fletch's domain: the new weight room. 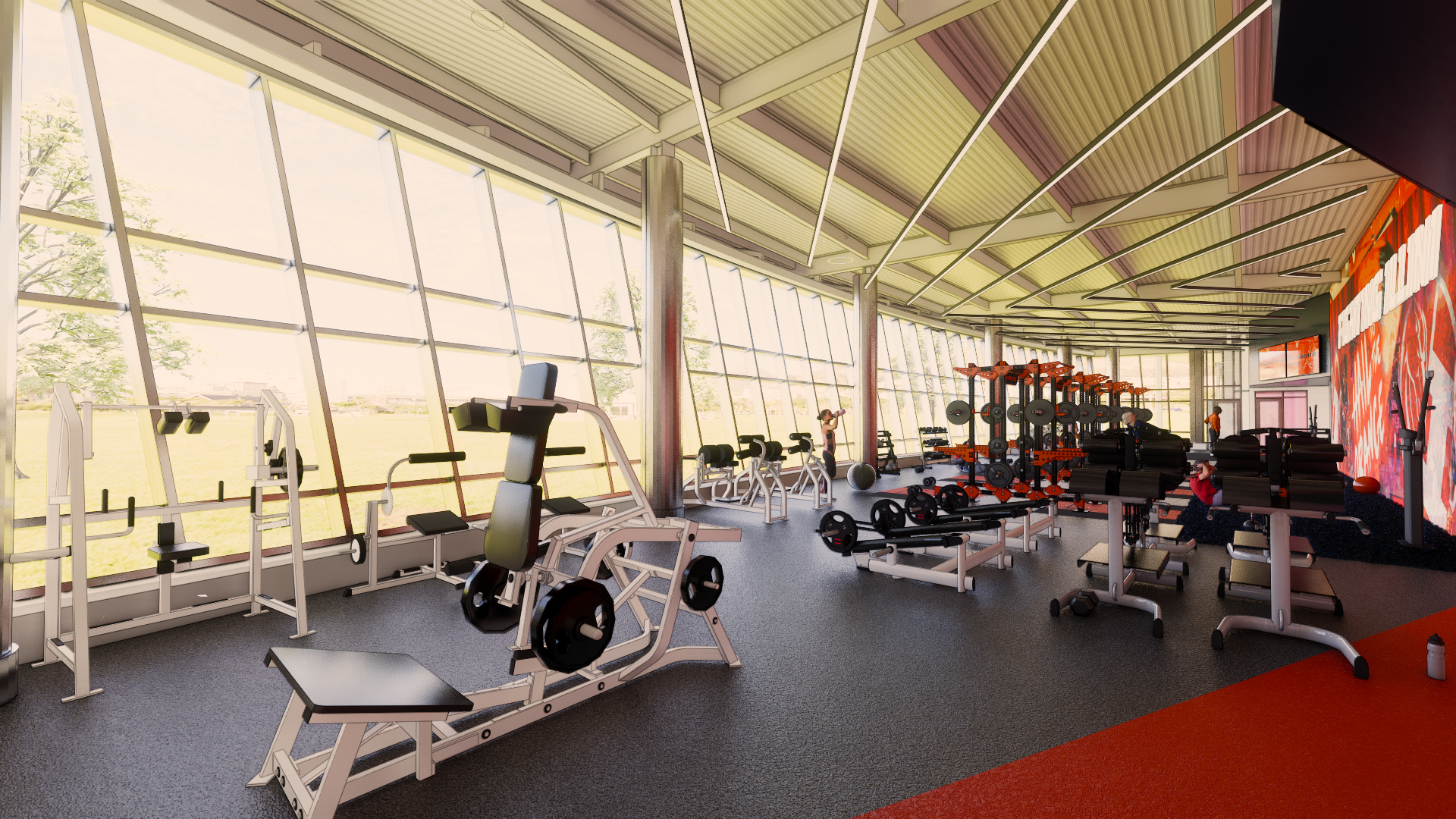 What's that? You want to know what the weight room looks like now? It's about 1/10th that size. I snuck a picture of the doorway into the current weight room (you can barely see it) after the Kofi press conference last week: 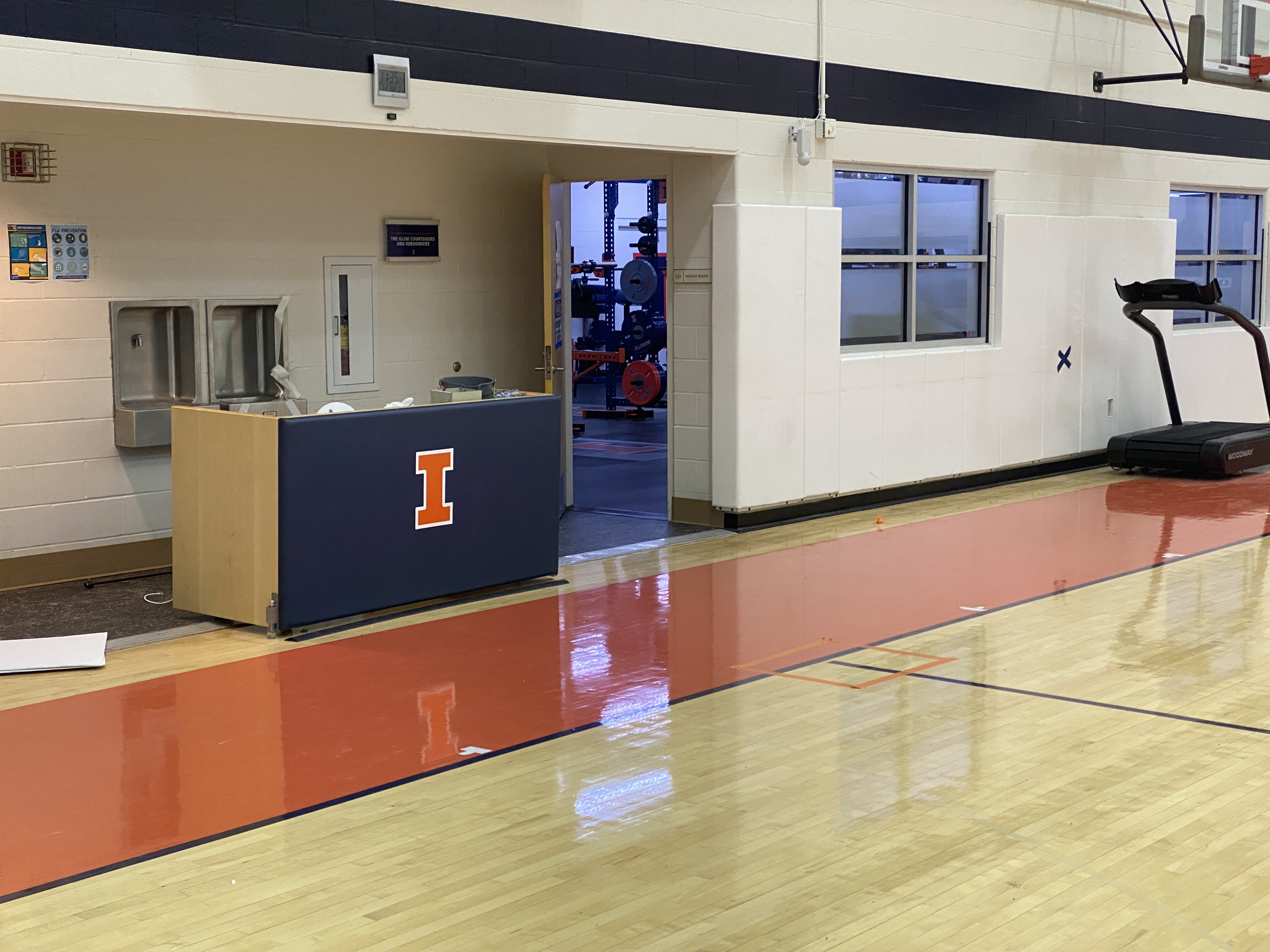 It's this room here which will be "court storage" after the renovations are complete: 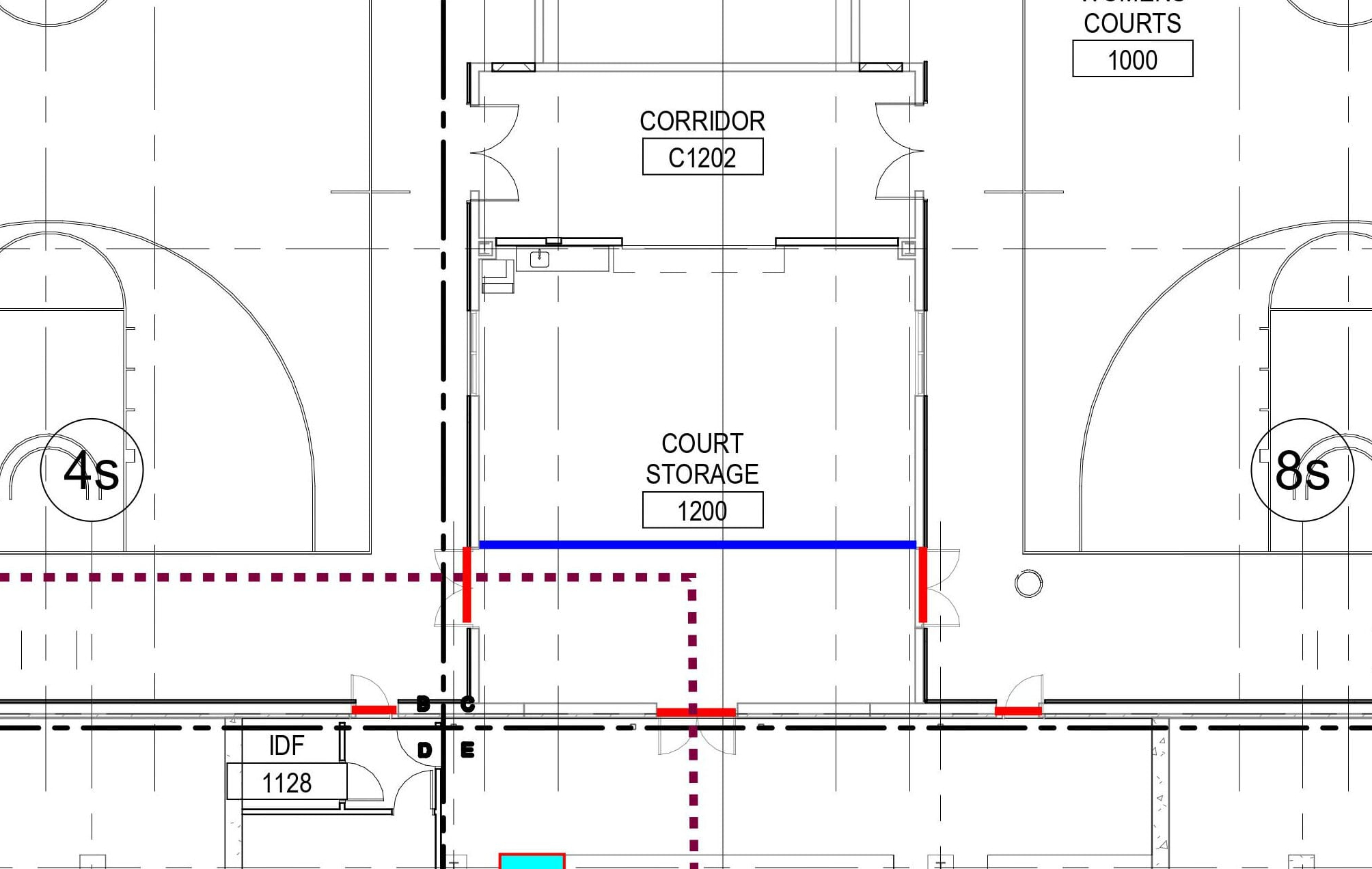 So yeah, a tiny bit bigger.

Behind the new weight room (in the center of the expansion area) is the new Sports Medicine area. Here's where you'll find it on the plan: 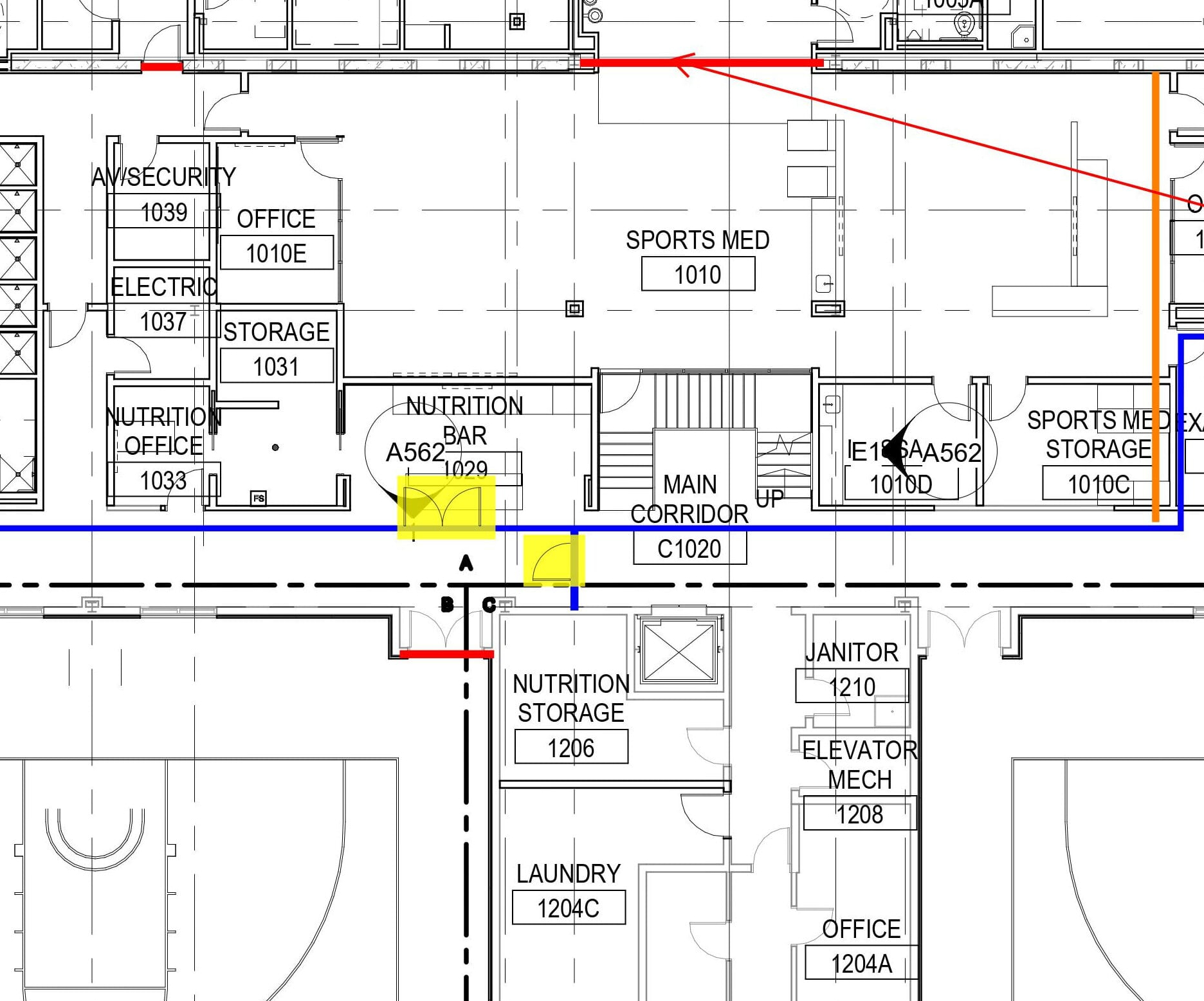 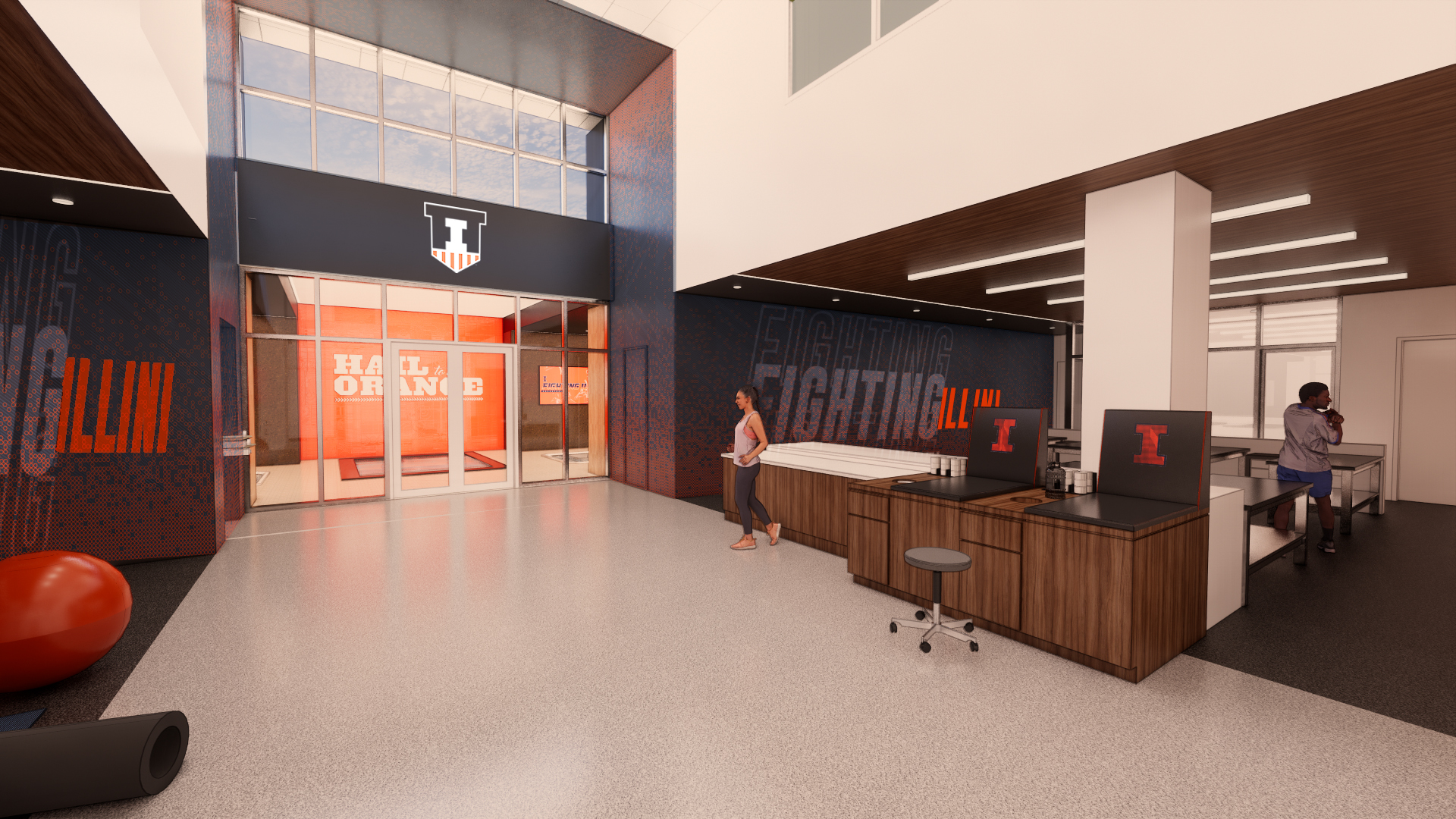 We should also take a peek into the new player lounges and the new locker rooms. As you might remember from the construction of the Smith Performance Center over next to Memorial Stadium, these are areas that change a lot from rendering to final product. So no, the men's player lounge probably won't have a couch like that, and it might not have three stand-up video arcade games in the corner (although if it did and it had Galaga and I could play it that'd be sweet), and it might not even have a pool table. But if you want the general idea of what might be in this team lounge area (between the weight room and the locker room)... 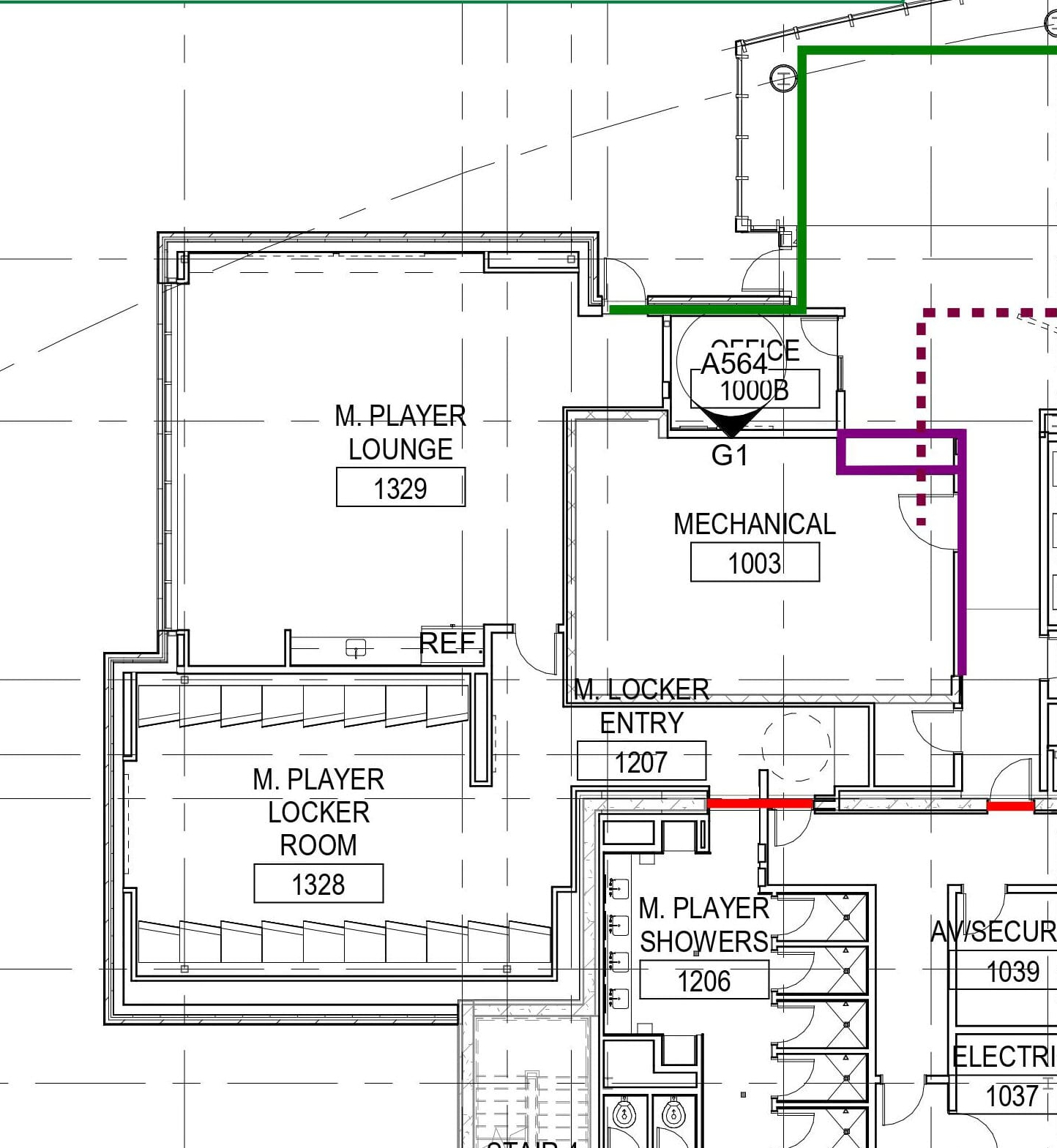 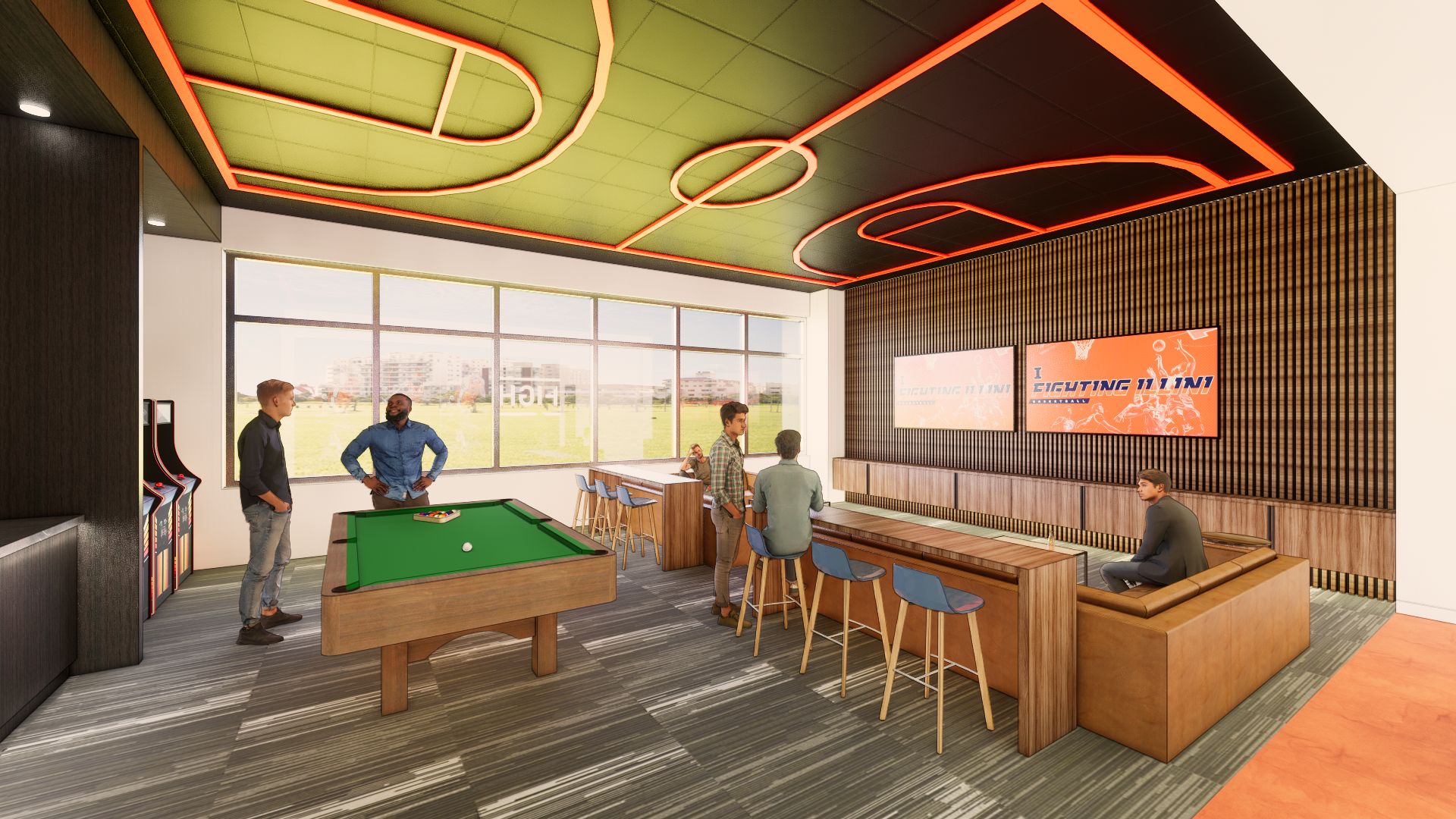 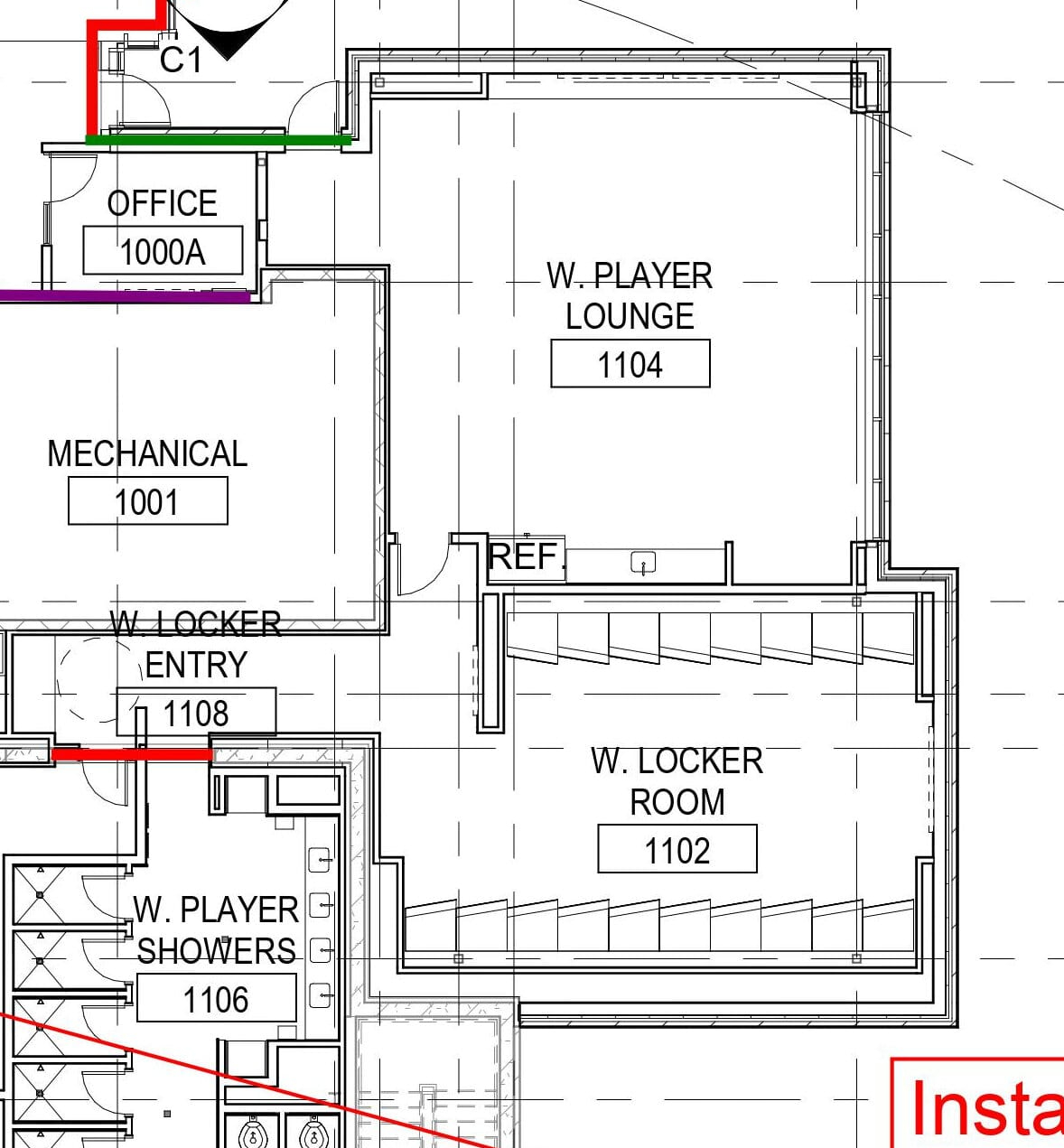 And here's the rendering of what it will look like: 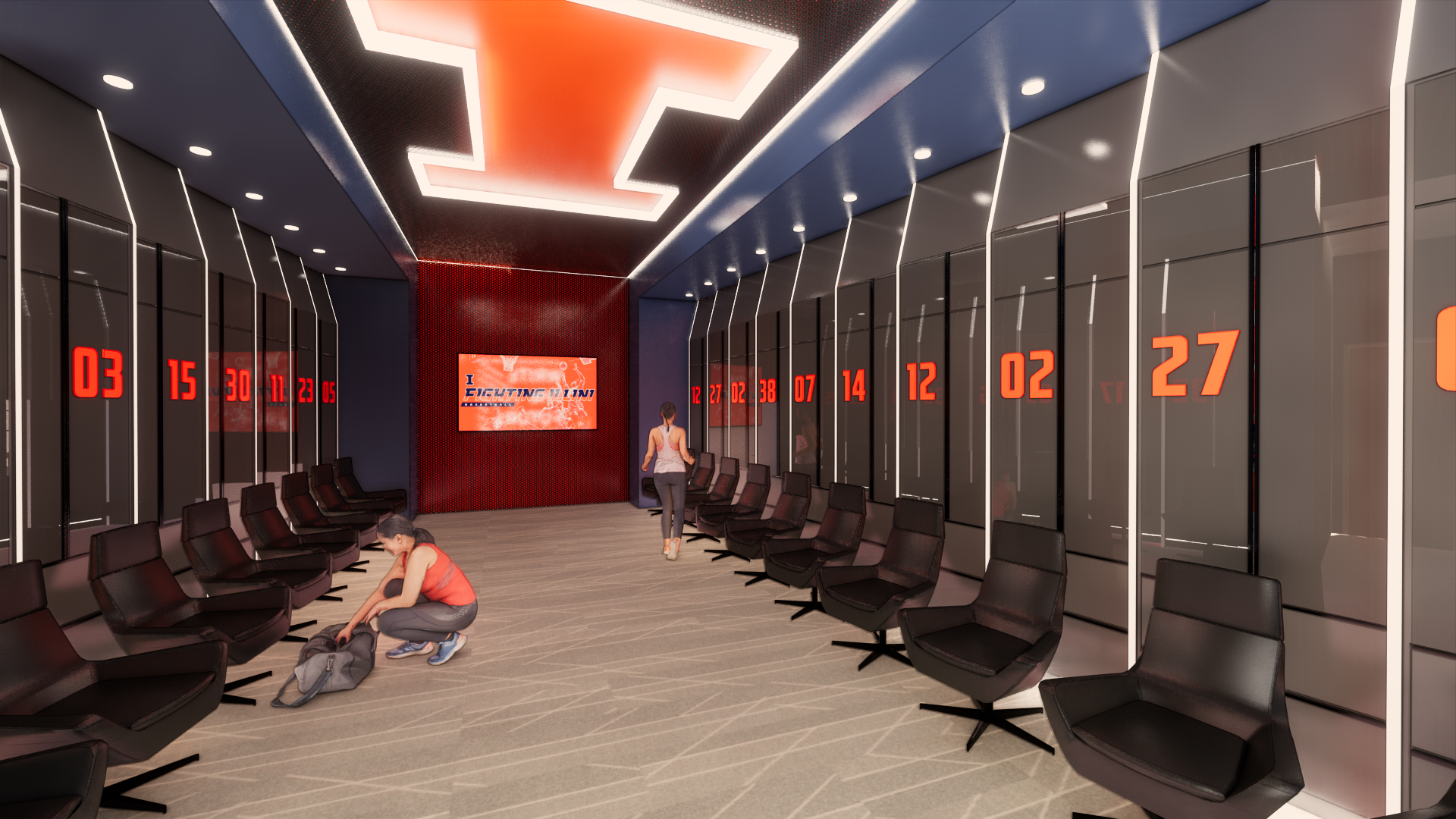 Did we cover all of the renderings I saved into the file. I think we did. WAIT, no we didn't. I have the rendering of the atrium.

When you enter the new building from the parking lot, you'll walk into a new lobby. On the plan, it looks like this: 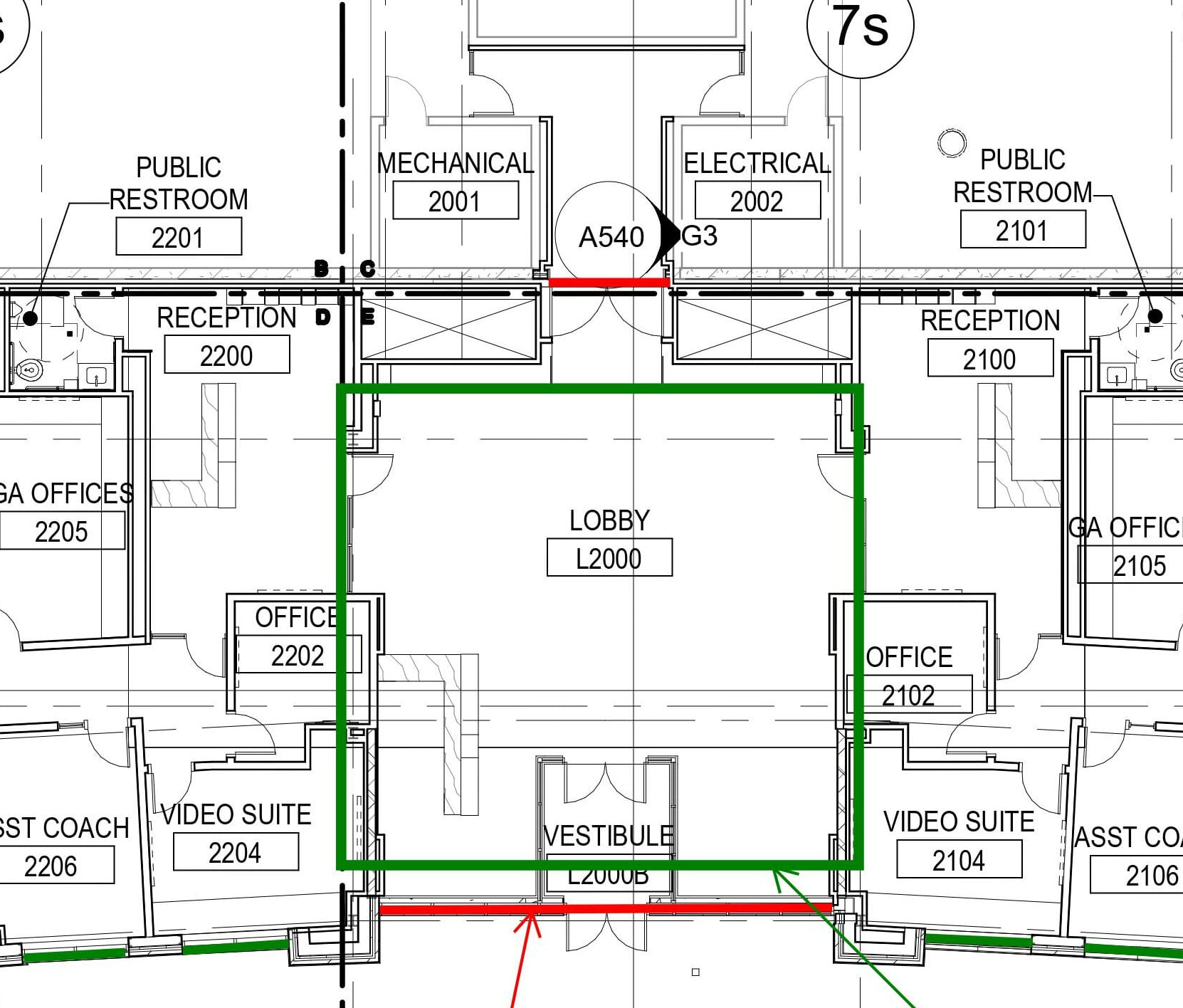 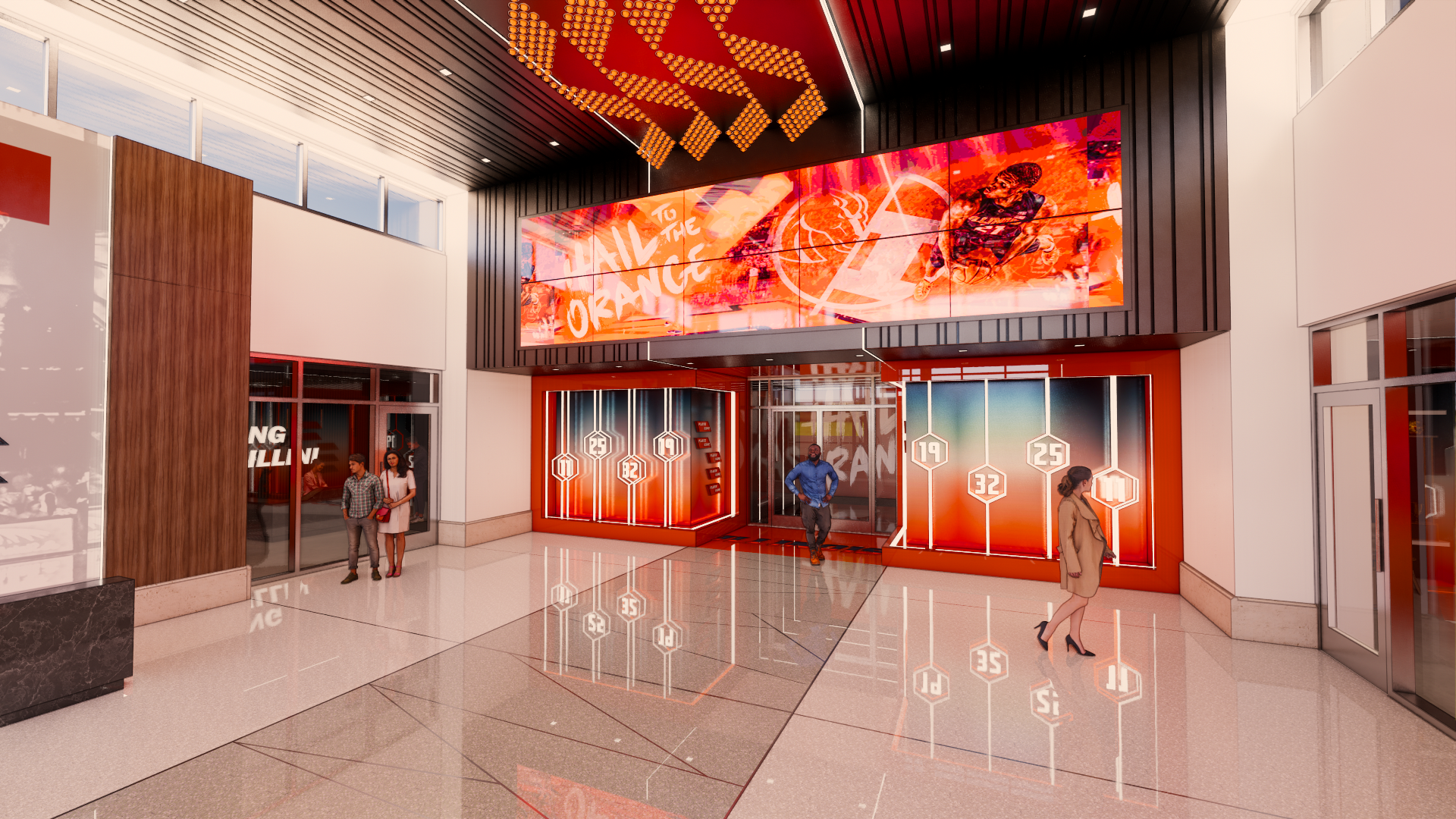 That door on the left will go to the men's basketball offices. The door on the right (the woman in the black heels is headed there now) goes into the women's basketball offices. And the door the guy in the blue shirt is returning from is the door to the balconies above the courts. So if you go watch a practice scrimmage some day because Kiwane Garris' son is on a visit and scrimmaging with the team, this is where you will enter. Shiny new lobby, double doors into the "old" building, out onto the balcony to watch the scrimmage.

Just go left instead of right this time.

(Part III tomorrow. Or possibly Saturday morning. My son and his wife land at Midway in three hours so I'm going to be off the radar screen until Monday. I have the 90 Illini posts pre-written, though, so those will go up every day.)

Do you have any idea why the men’s and women’s sides of this facility will flip? Even if the old plan was not completely symmetrical, this one seems to effectively be so. That suggests to me that there’s a personal request here – like an “I really want to be able to point out my window when recruits visit and show them that glorious basketball facility we play our games in” kind of thing.

With Underwood's office now on the west, the view out of his windows should look directly over to State Farm Center. This wasn't an option with either office in the existing layout.

I haven't been on campus in ages so, all of this is awesome! Thanks!