I had Robinson at #54 last year and now he drops to 71 even though Isaiah Williams has moved to wide receiver? Yes, that's where I ended up.

I moved Robinson around a fair bit after I put the list together, but he settled here at 71. I just think the arrival of Artur Sitkowski from Rutgers settles the backup quarterback debate. And Deuce Spann going 3-4 for 58 yards in the spring game (plus 3 rushes for 25 yards) while Robinson only got mop-up duty with the blue team (0-1 passing) suggests to me that in the spring game the quarterbacks were...

Williams is now at WR, so put Sitkowski in his place. I think that might be the QB depth chart at the start of camp: Peters, then Sitkowski, then Spann, then Robinson.

2020 statistics: Played in 2 games (Wisconsin and Purdue). 3-4 for 22 yards against Purdue before getting injured on the second series. Did not play the rest of the season.

Rod Smith got the offensive coordinator job on January 19, 2018 and Matt Robinson visited (and committed) less than two weeks later. Smith had recruited Robinson when he was the OC at Arizona, and when Smith got the Illinois OC job, he had 2 weeks to find a quarterback still available in the class. Robinson, who had decommitted from Montana, was the guy.

Robinson was then the media darling of the first training camp. I believe I made a Gabbo joke at the time and maybe three people understood the reference. That wasn't an insult to Robinson, just... I was surprised to see a true freshman QB get all of the attention when there's a long road between "looks pretty good at practice" and "starting Big Ten games".

While waiting to talk to Cam Thomas during QB media availability during that training camp (2018), I took this photo of the mob around Robinson: 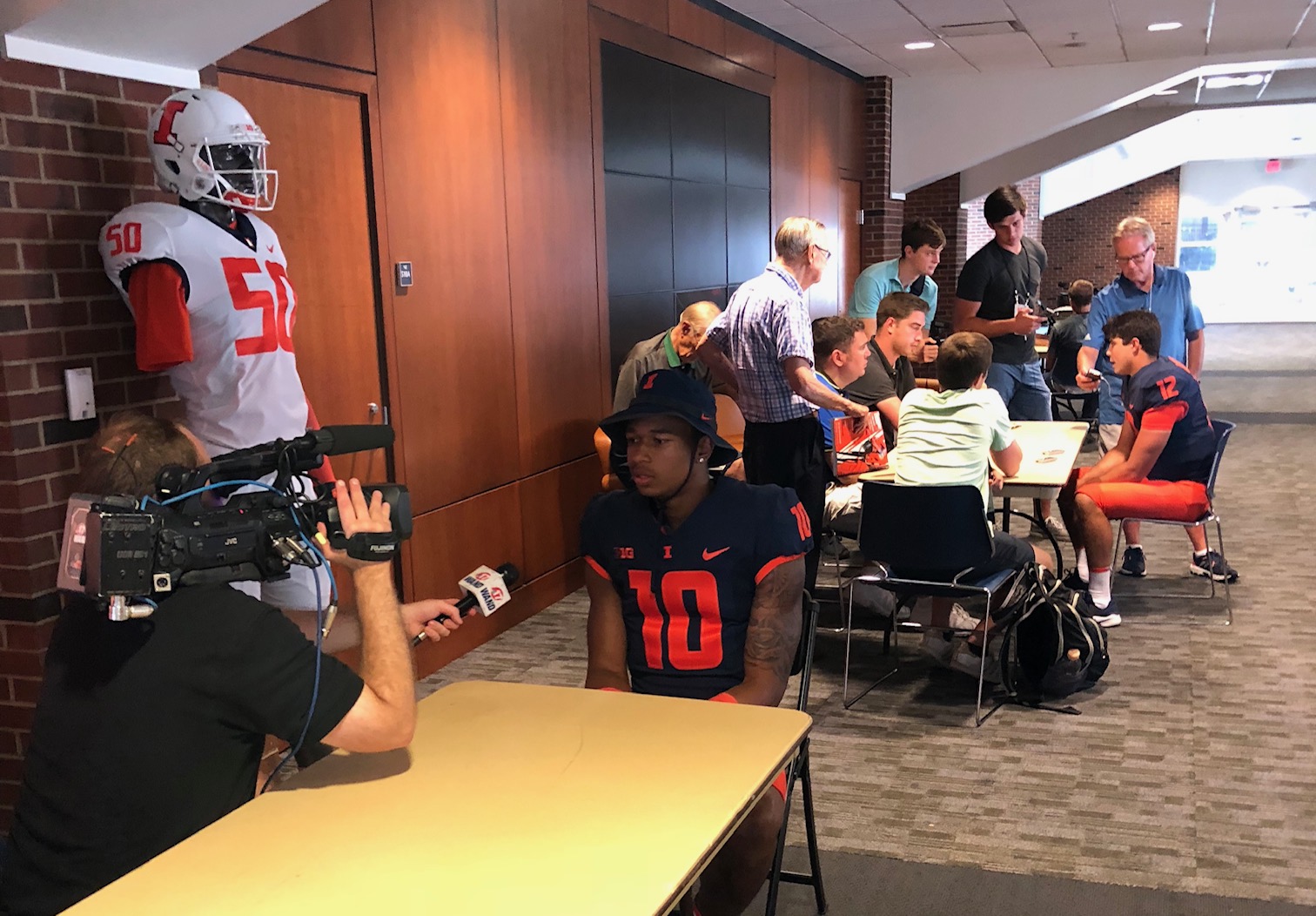 AJ Bush was the starter that year, but Robinson did have a much improved camp in 2019 and earned the backup QB job. When Brandon Peters was injured in the first quarter against Minnesota, Matt Robinson finished that game and then started the Michigan game the next week (on October 12, 2019). Peters returned for Wisconsin, but then was concussed by an Iowa cheap shot five games later and Robinson started the Northwestern game.

As noted above, my guess at the depth chart for the Nebraska game is Peters 1, Sitkowski 2, Spann 3. Maybe Robinson starts camp as the #3, but the way they used the QB's in the spring game (three quarterbacks got snaps with the first string offense: Peters, Williams, and Spann), I think Spann was clearly the #3 coming out of the spring. Actually, that would be the #2 now that Williams is a WR. So it's Spann, SItkowski, and Robinson battling for the backup QB spot.

The issue for Robinson - he's a dual-threat QB. And this offense seems to be built around tall passers with strong arms. If you rank the quarterbacks by "arm" this fall I'd say Peters, Sitkowski, and Spann are the top three. If you rank them by running ability, it's maybe Coran Taylor, Samari Collier, and Matt Robinson (I guess Spann factors in there, too). Given what this offense looks like it will be, I think it will be a struggle for anyone from the second list to take a spot from anyone on the first list.