We interrupt this string of LLUOI posts to go over the expectations for 2021 Illini football. I'm not sure there's ever been a more "might win one game, might win eight" season, so I felt like we maybe needed to go through what Vegas and the computers are saying.

First off, I think Vegas and the computers (if computers were sentient and had the ability to respond) would tell you that 2021 expectations are the most difficult projections of the last few decades. It's just so hard to know how much you know from the Covid season. A few reasons for that:

As a result, I feel like the entire world will overrate Indiana this season. Now, they did lose their QB midseason, so if he was there they probably wouldn't have been negative in yards. But they shouldn't have been considered the 7th-best team, either. They'll be significantly better than us, and what Tom Allen has done is impressive, it's just that... you get my point.

So now we look at 2021. Some Vegas lines are coming out (over/under for season wins), and some computers are tossing some numbers out there, so let's see where we land.

We'll start with ESPN's FPI. It's just a computer model, so this is not ESPN's "opinion" on the season. But here's what they have for win totals in the Big Ten:

Fairly interesting tier-wise. Ohio State is on their own tier (duh), then there's a tier of Wisconsin, Penn State, Northwestern, Indiana, and Iowa (Northwestern?). After that a step down to a tier of Michigan (wow), Minnesota, Maryland, Purdue, Nebraska, and Michigan State. And then bringing up the rear, Rutgers and Illinois.

Next we'll go with DraftKings over/under win totals. Yes, I'm aware that some of these are set to get people to hammer one side. We're just talking generalities here.

Much higher on Michigan, much lower on Northwestern, Illinois and Rutgers still bringing up the rear.

PFF also put out their rankings of every college football program, 1-130. Here's the Big Ten:

I also saw this graphic which I thought was interesting. This Twitter account tweets a lot of analytics stuff (mostly ACC and Florida State-centric), and this is a chart of the DraftKings over/under (listed above) vs. a simulation he ran (a "play the season 1,000 times" kind of thing). Here's what he found:

Draftkings Sportsbook put out win totals for CFB! Here are those totals against my ELO rating simulations. Honestly not bad for a relatively simple ELO model #CFB #CFBStats pic.twitter.com/pG1DevNTAl

That's pretty favorable for Illinois bettors. Meaning, his simulations suggest more than 4 wins and DraftKings has it at 3.

That guy also has a newsletter (link is in his Twitter bio up there) and in his newsletter he tweeted the following chart for his simulations in the Big Ten: 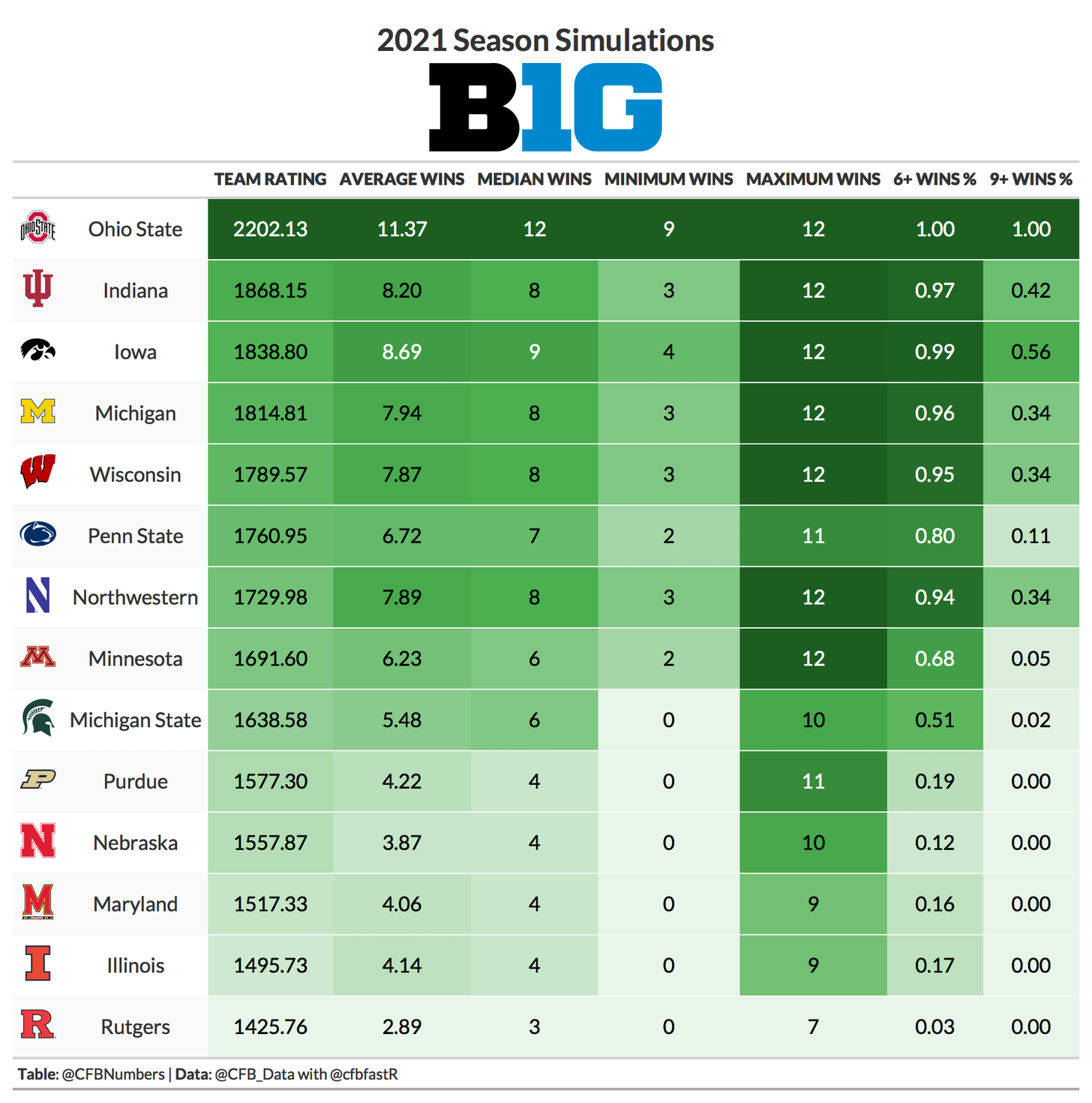 That's probably the one that feels the best? Just going by the average wins (across the 1,000 simulations), here's the tiers for that model:

Swap Northwestern (who lost a lot) and Penn State (who rebounded from last year's disastrous start) and I think I might agree with most all of those. Feels like Iowa might be able to win the West. Not sure Nebraska has turned any corners yet. Rutgers won three games last year but still has overhauling to do. Illinois, mostly on the basis of having UTSA and Charlotte on the schedule, plus crossover games with Maryland and Rutgers, probably has a little better chance than the oddsmakers are giving out right now.

Add in the weird little quirks that don't usually exist (Illinois has more super seniors returning than any other program in the country) and maybe there's room for expectations beyond the 3.8 on FPI and the 3 on DraftKings. Then again, here's the first-year record for the last four "have to start over again" Illini coaches:

New coaches and new schemes almost always result in on-the-field confusion during a transition. Is that offset by us moving from 7 returning starters to 17 with all of these Super Seniors returning for one more year?

We have all summer to try to figure it out.

As usual, my extra optimistic extremely rose colored glasses uncontrollably drive me to expect us contending for the B10 West championship. While I am an eternal optimist, that isn't just based on empty and uneducated hope. I really respect and admire what the new coaching staff have done since being in place.

So many in Illini Nation felt that Lovie (without the virus) should have won 9 games last year. With almost everyone returning and the strength and experience increasing, I feel that BB should, at least, do the same.

My unrealistic expectation is a bowl game win.

I was feeling pretty good about the season until all of those graphics.

Feels like 4 wins should be the floor for next season. I'm pretty ignorant when it comes to Illini football but don't we have our QB and a ton of seniors coming back on both sides? We were 2-6 in the Big Ten last year and definitely got the short end of COVID.

I get that there is some coaching turnover but our coaching staff was one of the worst in Power 5 football and it is being replaced by one that appears competent and has an approach that is not a complete tear down/rebuild from scratch. I just don't see 2021 being a step back from 2020.

Add in a 2-1 non-conference schedule to that 2-6 and you get 4-7, plus another Big Ten game that is theoretically winnable.

Gut feeling here is a surprise 6-6 season with a bowl generating some buzz for the BB era. I've seen enough 6-win Illini teams that are barely competent (not giving away games) in all phases and strong enough in one area (in this case, simple ball control offense) to beat the flailing teams.

If I'm being honest I was shocked to see O/U totals starting with a 3. Maybe I'm not jaded enough or not paying enough attention but I don't see how we're worse than 2019. The schedule isn't loaded with an abnormal number of unbeatable teams or anything so I don't think I'm crazy here.

I'll take the over.

Thought I'd look at Coach Bielema's first year at Arkansas to see how they fared under his leadership. In the year before (2013) Arkansas was 4-8 on the season, 2-6 in conference, 2-2 non-conference. In Bielema's first year (2014) Arkansas was 7-6 on the season, 2-6 in conference, 4-0 non-conference, and they won their bowl game (Texas Bowl). 2014 was a regular season improvement of 2 wins vs. his 2013 predecessor, John L. Smith. If the Illini win 4 games in 2021, it would be consistent with his first year improvement for Arkansas. Anything more would be unexpected, but welcomed, for me.