Keep Your Head Up

Actually, maybe I should start with the full background here. I asked to talk to Carlos Sandy today because I've noticed him playing more and more. Especially in running situations. At 5'-9", he's the shortest scholarship player on the roster, so how is it that this 5'-9" wideout has worked his way into the #4 receiver spot on this team?

And that's not an exaggeration. Let me go pull the current WR snap counts from PFF:

I did have Carlos Sandy as a second-string WR in my final depth chart this summer, but if I'm honest, I expected guys like Thompson, Bryant, and Hightower to be ahead of him in the rotation. So to see him clearly listed as the fourth receiver is certainly a surprise this season. A pleasant surprise.

That's the background here. I wanted to talk to Sandy about this season and the long grind of the last four years where he had to navigate coaching changes, scheme changes, injuries, and other roadblocks. He had four catches in the 2019 season... all in the Redbox Bowl because he missed the first 12 games with an injury. So I wanted to know what the journey was like. I expected "gotta keep your head down and grind." He went the other way:

"I feel like the biggest thing coming in is to keep my head up and being aware of what can happen. Being ready in any situation, no matter if it's a coaching change, the weather, injuries… no matter what it is, just keeping my head up and listening to those who are coaching me to do what I need to do."

I think I like "head up" better than "keep your head down". I pressed in, asking what he meant by that. His answer was along the same lines:

"I feel like I never get out of the mentality of being ready. I feel like I'm always ready no matter what the circumstance. Whether the whole game I only get in for two minutes, whether I only play the last ten, or if I play the whole game, I feel like my mindset is the exact same. I'm ready to go in and give my all every snap."

My immediate thought after he said "give my all" was the photo at the top of this article. Here's the full photo (from the Charlotte game): 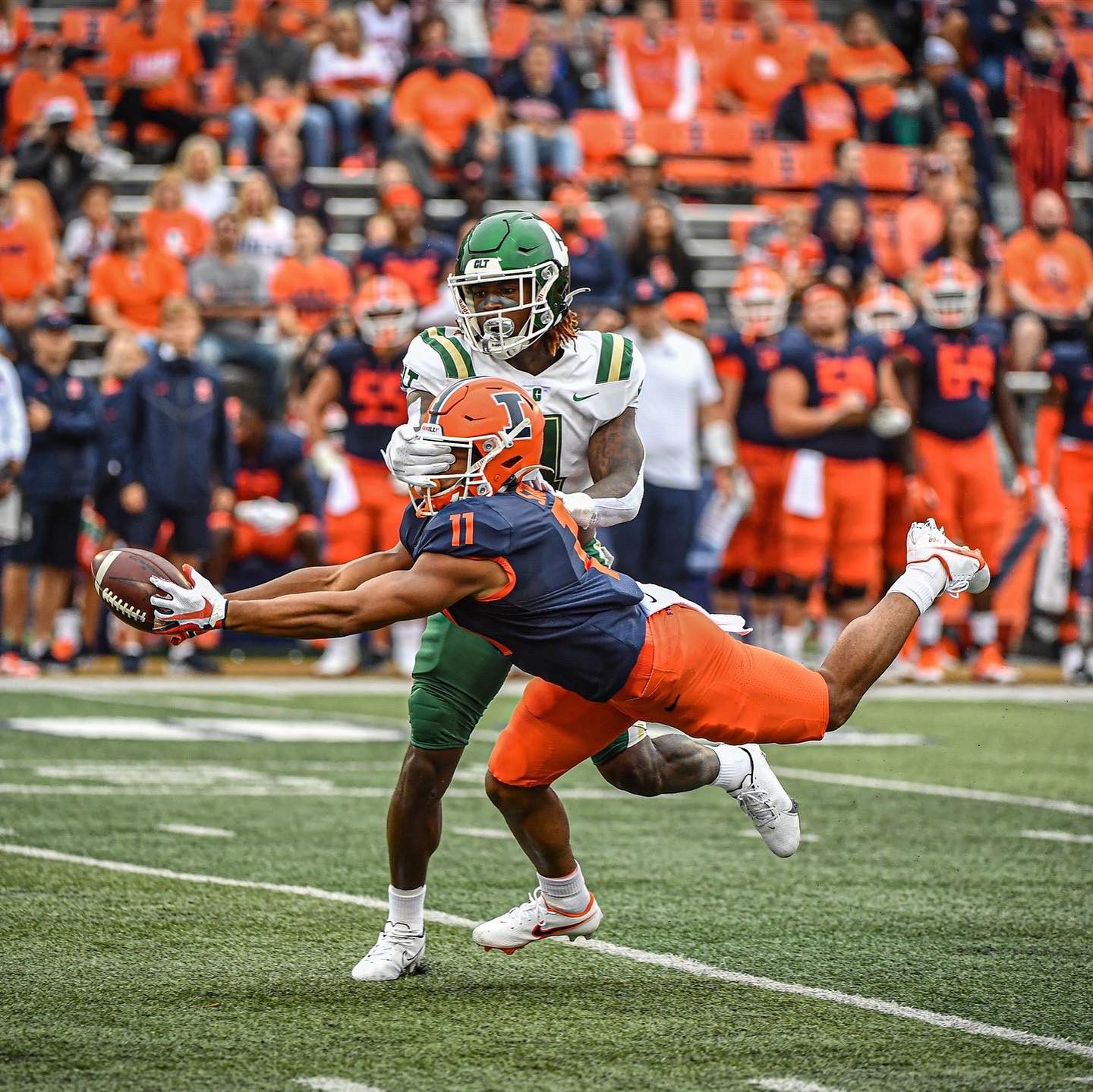 That was the deep bomb to Sandy in the first half of that game. He was inches from bringing it in. Just trickled off his fingertips. And he certainly had his "head up" there. He just, uh, had a defensive back inventing a new method of faceguarding. (I also see a bit of a facemask grab there, but that's just me.)

"I don't look at is as a 'challenge'. I look at it a -- what's the word I'm looking for? -- I look at it as a mission. I go in there with a positive mindset. I know they're going to be bigger than me. That's what makes it even more fun. I go in there with joy and excitement feeling like I'm going to go dominate a person (bigger than me). I don't know if you see it on the plays, but when I'm out there blocking and doing what I have to do, I'm extremely excited. And that doesn't just come on Saturdays. That comes on Mondays, Tuesdays, Wednesdays, and Thursdays."

Love that attitude. If you have to be out there trying to block a 6'-1", 215 lb. safety coming downhill, why not see it as exciting? You can approach it with dread or you can approach it as "this could be fun." Carlos Sandy has chosen the second one. Is this something he learned during his college career?

"I feel like I've been like that my whole life. Being smaller and not really getting the coverage and all this extra stuff like some guy who's 6'-5", I feel like all I can do is show my effort. Putting forth my best and being all-in. And if I keep on doing so, good things will come my way."

Maybe this is the weekend where the good things start coming his way.

OK, so pretend like the credits just rolled. You're about to get up out of your seat at the theater but someone told you to stick around after the credits. There's a bonus scene, and it's a good one.

At the end of our chat, I had one more question for Carlos. Someone told me to ask him about his pet... pig?

He was quite excited to talk about it:

Awesome. This is great Robert!

I'm definitely a Carlos Sandy fan now. Thanks for sharing the fun!

We Know He Has Sand