Let Me Sum Up

To clear the cache in my brain, I think the best thing to do here is to write a mini-post about every thought I'm having. I usually collect those thoughts and turn them into entire articles, but there's just too much here. To quote Indigo Montoya, "Let me explain. No, there is too much. Let me sum up."

This is the main thought bouncing around my head today. Here's probably the best way to frame it. Scoring defense the last 10 seasons. As simple as "average number of points allowed" to compare 10 defenses:

1. I feel obligated to remind everyone that after the 2015 season - our best defense this past decade - Bill Cubit fired defensive coordinator Tim Banks. The offense only scored 22.67 points per game, but it was decided that Banks was the reason for the 5-7 season and soon after Cubit was extended on Not Ideal Day he dumped Banks. None of this mattered, of course, because Cubit was let go before spring ball could begin, but I just felt like we should recognize the 2015 defense again.

2. This defense has a chance to equal that defense (at least scoring-wise), and that's by far the biggest surprise this season. As of right now, over the last decade, it's 2015 #1, 2021 in second place, and 2019 getting the bronze.

I also feel obligated to point out that it's down to only five seniors in the entire rotation (starters and backups). Let's go through those rotations.

+ On the interior of the defensive line the main rotation is four guys: two freshmen start (Keith Randolph and Jer'Zhan Newton) and two nose tackles rotate in for various formations (Rod Perry, a senior, and Calvin Avery, a junior).

+ At defensive end (sorry, "outside linebacker"), it's a senior (Owen Carney) and a freshman (Seth Coleman) starting and then a senior (Isaiah Gay) and a sophomore (Ezekiel Holmes) backing them up.

+ With Jake Hansen and Calvin Hart out for the season, it's mainly just two guys playing nearly every snap at linebacker: sophomore Tarique Barnes and junior Khalan Tolson. Then there's a few snaps for junior Alec McEachern and maybe a few for The Dark Angel (also a junior).

+ At safety + star (the three safety positions), it's a heavy rotation of the starters (Quan Martin, Sydney Brown, and Kerby Joseph, all juniors) with some snaps here and there for senior Prather Hudson and sophomore Eddie Smith.

That's five seniors - Carney and Adams starting, Perry, Gay, and Hudson as backups - on this defense. And next season, with some underclassmen probably ready to contribute and a few transfer portal acquisitions, you have to think this defense should be... better?

I'm on the train last night writing the last article - I'm sitting in the vacant dining car while everyone is asleep - and the phone rings. It's O'Donnell calling for the rare celebratory postgame phone call. When I lived in St. Louis, we shared many a postgame "why do we care so much?" phone call while I was driving back to STL. This time, I'm on a train, he's back at home, and we're both still giddy from the win so why not a conversation at 12:30 am?

We got to talking about plays that everyone remembers from road wins. From his era, obviously, everyone remembers the three 3rd-down conversions by Juice at Ohio State (and the fourth down conversion) to run out the final eight minutes of clock and beat #1. Our conversation quickly moved to something else, but I woke up this morning thinking of Plays You Remember in road wins. We're talking Johnson-to-Klein 1993 Michigan plays. I think Casey Washington's catch (in the bottom of the ninth) will definitely be one of those plays in 25 years.

So for this era - let's call it 1995 until today - what would be the top five? I picked "1995 until today" because that's when the "only 5 winning seasons in 26 years" streak started. In those 26 seasons, the top-5 plays I remember from road games. In reverse chronological order because I'm not trying to make this some big debate.

So great to have another one to add to the list.

I've worn out the book at this point (the "book" = the term for the official stats printed immediately after the game in the pressbox), but upon another flip-through just now, I landed on something else. I suppose I could go find the online book and then cut-and-paste the text here, but something about taking a picture of it and linking it here feels right: 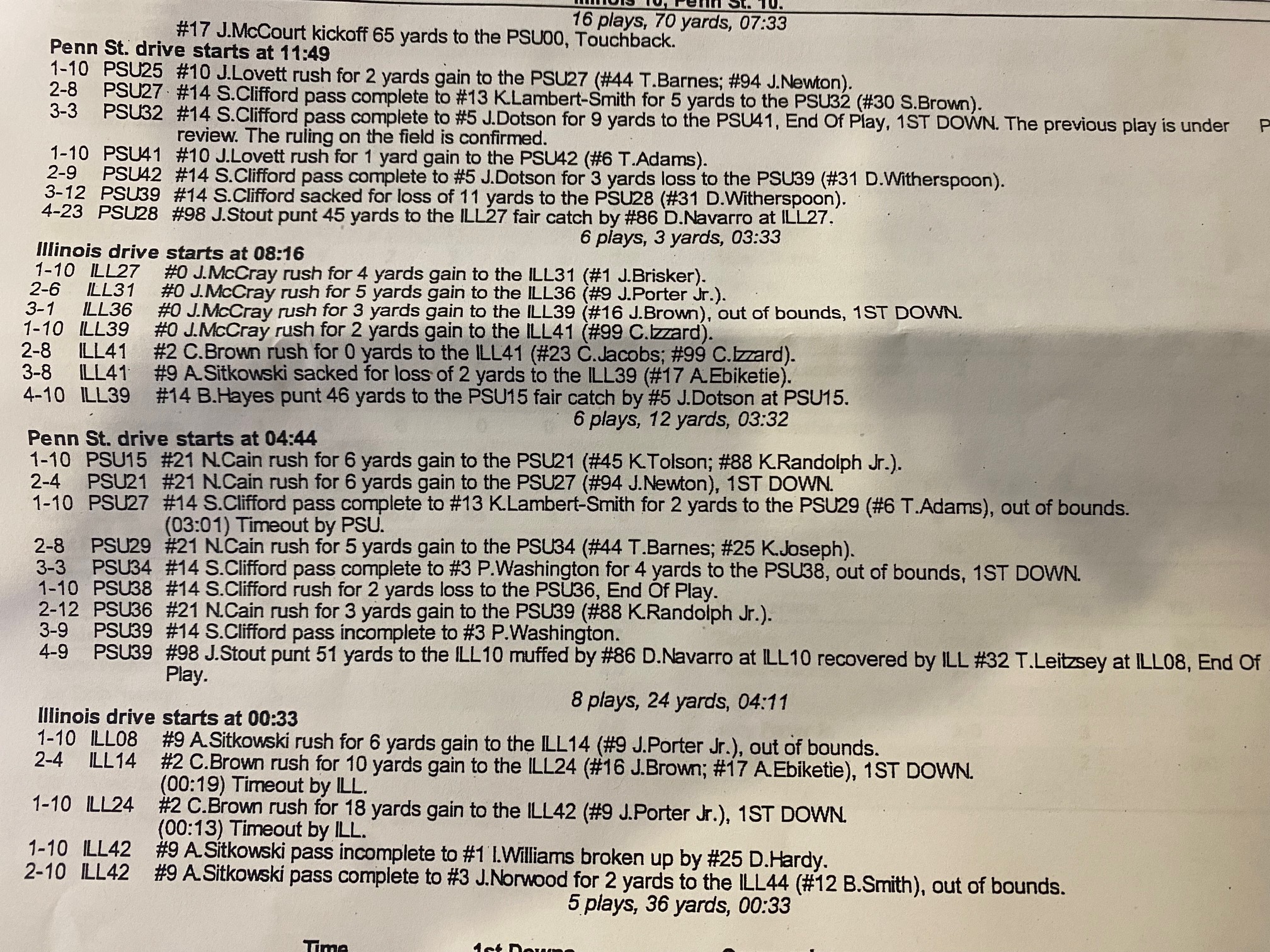 I'm talking about the Penn State drive that starts with 4:44 remaining. How many times have we watched that drive? I mean, we saw it twice already this season.

I mentioned another version of that kind of drive at Penn State (2010) yesterday. How many times have we had the "just need to stop them one more time" game where the narrator speaks up and says "they didn't stop them."

And when Penn State picked up those two first downs, I'm guessing every single one of us was thinking the same thing. Some version of "here we go again."

Followed by a two-yard loss, a three yard gain, an incomplete pass, and a punt. Illinois wins in overtime.

Let's make that the new normal.

Pretty sure it entered all of our minds.

Well, let's get in there and talk about it. Here's the remaining games:

Home vs. Rutgers
At Minnesota
At Iowa
Home vs. Northwestern

Looks like the opening teaser line for Rutgers is Illinois -2. And I'm pretty sure Illinois will be favored over Northwestern. So I see it like this:

For it to happen, we'd have to win both of those games. Lose either one and no chance. There's just no way we win road games at both Iowa and Minnesota. The absolute best-case scenario there is 1-1. Likely 0-2.

This win will change a lot there. Not only because 2-10 is no longer possible, but also because of the statistical domination. Here's where he had the postgame win expectancy:

87% says one thing: Had Penn State scored in the 3rd through 7th overtimes, it would have been a 2019 Illinois/Michigan State-like victory for them. Dominated statistically and they needed turnovers to even keep it close, let alone win the game. Which, hey, I love a good turnover win. But I still acknowledge the fortune required.

So with a statistically dominating win over a good opponent, those percentages will go up. They won't skyrocket - we did just have a game where Wisconsin held us under 100 yards, you know - but they will improve.

Still, I'm not sure the percentage chance of six wins will get much above 10-15%. The defense might be holding opponents to 23.75 points per game, but the offense is only scoring 18 points per game. That is not a formula for finishing 3-1. The most likely finish, I think, would be 1-3.

1-3 would be just fine, of course. Cover the preseason over-under, statement win achieved, would be 3-6 in the Big Ten in year one and that's something to build on. 4-8 can be recruited to with a win like this.

I'm getting lost here. I should just answer my own question. Can we go 3-1 and get to a bowl? No, I don't think so. 4-8 the most likely, but I really want to get to 5-7 with a win over Northwestern that final week. There's some momentum going into 2022.

The best part about this win, we had our turnover game and we still won. Glad to get that out of the way.

If you're looking for a play from that 2019 Michigan State game, I'd go with Peters to Imatorbhebhe on 4th and 17.

Bill Connelly has updated things and has us at 8pct chance to get to a bowl. Something like 45 chance of 4 wins and 30pct chance of 5 wins.

Yep. Was just coming to put that here in the comments.

No Field goal to beat Wisconsin in the top 5?

That was a home game.

Ty Myers gets in the Top 5 for me. Springfield OH (I think) kid who didn't get a Buckeye offer. B1G Championship sealer as well.

Rocky Harvey should have taken a knee at the 1.

That was the second touchdown. The first touchdown gave Illinois its first lead with less than 3:00 remaining. That's the play that is immortalized everywhere (including the sculpture in the Smith Center).

The second touchdown with 58 seconds left after Trayvon Waller picked off Tom Brady, yes. Rocky should have gone down at the one. But the first touchdown is immortal. 3rd and 4, 2:55 remaining, AT OUR OWN 41, not even thinking we can get the first down, let alone drive 60 yards in the final three minutes to win at the Big House, and Rocky gets it done in one play.

@Purdue '01, the 2 pick sixes are obvious, but the early goalline stand to prevent us from going down 17-0 early was ginormous.

Who is the Dark Angel?